In Singapore and Indonesia, women re-claim rights from religious fundamentalists

Jakarta, Indonesia/Singapore — The ideologues say men are the bosses of the household and women should just keep it clean and take care of the children. They tell women not go out at night, and not to wear short skirts -- if you are sexually assaulted, it is your fault. “Gender equality” is a heresy imposed by Westerners and rogue clerics, they say.

In Singapore and Indonesia, these ideas are being increasingly espoused by Muslim fundamentalists and by politicians currying favour with conservativegroups. The result: more and more laws and policies aimed at confining women to their homes.

Two civil society groups, Association of Women for Action & Research (AWARE) in Singapore and Solidaritas Perempuan (SP – Women’s Solidarity) based in Jakarta, Indonesia, worked to reclaim women’s rights from these ideologues through awareness-raising and advocacy in a project called Gender Equality Is Our Culture. The three-year project, from October 2013 to September 2016, was funded by UN Women’s Fund for Gender Equality, which also provided technical support. While working in their respective countries, AWARE and SP collaborated on activities such as curriculum development and workshops on extremism. In Indonesia, the project areas were Aceh, Makassar, Mataram and Yogyakarta.

Until she became involved in the project, Mardhiah Amin, 38, of Meunasah Mesjid in Aceh, did not see a problem with sharia, or Islamic law, which is formally established in the province.

The rules and punishments for women, Ms. Amin thought, were just to protect them from harassment.

“At first I thought that women must obey men because that was taught by my mother and grandmother. People around me also said, it is taught by Islam,” Ms. Amin said.

In a workshop organized by the project, Ms. Amin heard that both husband and wife should be caregivers and both should be allowed to work and to make decisions in the household. In a discussion group organized in her village, she learned how to negotiate with her husband on property and income decisions. With new-found confidence, she became the head of the discussion group. 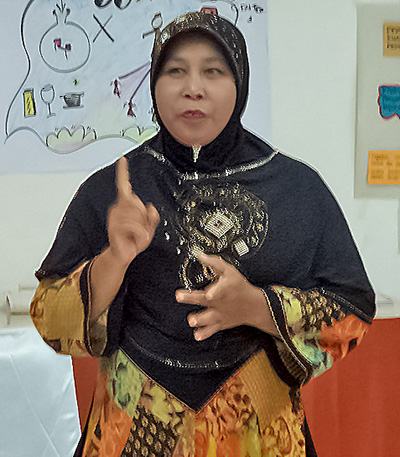 Mardhiah Amin during a presentation at a training on women’s rights with grassroots women in Aceh, Indonesia, in May 2016. Photo: Solidaritas Perempuan

“My family has started to practice gender equality through mutual aid and mutual understanding among husband, wife and children,” Ms. Amin said. “Now I can follow activities and discussions in the village and get support from my husband, while being able to share my knowledge with other women in my village.”

The AWARE/SP project worked to replace patriarchal perspectives of religion and culture with those of the United Nations Convention on the Elimination of All Forms of Discrimination against Women (CEDAW). It developed training manuals and organized forums and workshops to explain CEDAW to journalists, grassroots women leaders, and religious leaders and religion scholars. Workshop participants wrote articles published in the media, and journalists were encouraged to cover these issues. Religious leaders learned about how misinterpretations of Muslim teaching conflict with CEDAW principles.

Singapore has placed reservations on two CEDAW articles, saying they conflict with Muslim law. Indonesia has ratified the full provisions of CEDAW, but implementation has been hindered by discriminatory cultural practices. 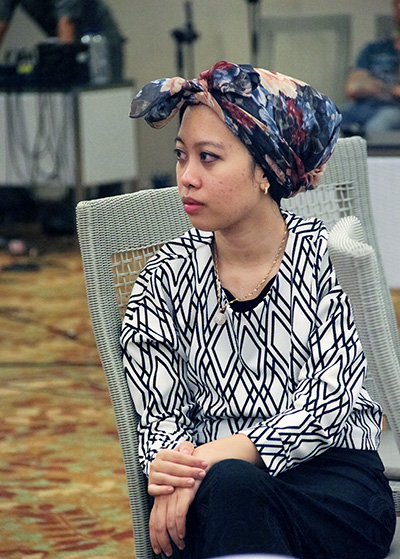 The project also organized support groups in the villages for women to regularly discuss the root causes of the discrimination they faced every day, and what to do about it. They published a book, Perempuan: Muslim Women in Singapore Speak Out; in it, 24 young women tell of how they resisted religious and cultural discrimination and urged others to do the same.

Fadiah Nurul Fadiah Johari, 28, is a Muslim who was a volunteer for the project in Singapore and later co-founded Penawar (“antidote”), a support group for young women who have experienced trauma due to misinterpretations of the religion.

Gender Equality is Our Culture, she wrote, “has given me a sense of belonging in challenging patriarchy within the local Muslim community. GEC has also given me confidence in developing my knowledge about feminism within Islam, as well as the confidence to engage with the community on such ideas.

“Also, GEC gives me hope that there can be progressive change within the community towards greater consciousness and gender equality.”

Related News
21/03/2022
World Down Syndrome Day
20/12/2021
Joint Statement: UNHCR and UN Women join efforts to protect and uphold the rights of women and girls in Afghanistan
11/12/2021
The UN in Indonesia Is Holding a ‘Comedy for Equality’ Showcase with Award-Winning Comedian Sakdiyah Ma’ruf
30/11/2021
I am Generation Equality: Tabbasum Adnan, Founder of First All-Women Council of Tribal Leaders in Pakistan
24/11/2021
Take five: “The justice system must be responsive to persons with disabilities.”
END_OF_DOCUMENT_TOKEN_TO_BE_REPLACED