Samoa, Pacific Islands — In one week, on 25 November, UN Women takes a lead role in the 16 Days of Activism for the Elimination of Violence against Women and Girls global movement to 'Leave No One Behind: End Violence Against Women and Girls'. The Samoa field presence for the UN Women Multi-Country Office in Fiji, has made an early start to achieve a key objective for this year's 16 Days campaign by holding a National Inquiry into Family Violence, 'putting a spotlight on the wide implications of violence against women and girls within the most marginalised groups'. The incredibly public Inquiry has sparked national and regional conversations - across media and the general population - about the need to end violence against women and girls, in the run-up to 16 Days. 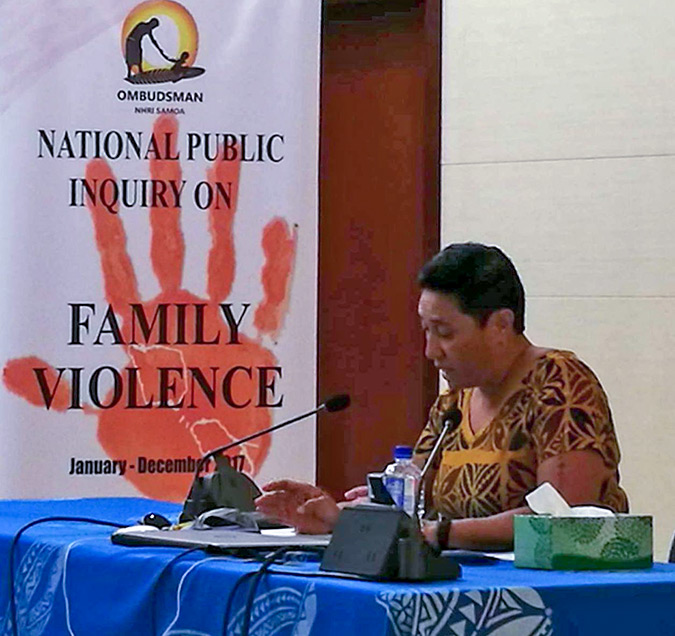 "I want you to know that you are not broken, you are not worthless, and you are not to blame," said a survivor of child abuse during her powerful testimony at Samoa's National Inquiry into Family Violence.

Samoa is taking strong action towards ending violence against women and girls, and has just completed its first National Inquiry into Family Violence, coordinated by the National Human Rights Institution and Office of the Ombudsman, SAMOA, with support from UN Women.

The Inquiry is in response to date from the first State of Human Rights Report 2015 (SHRR 2015), revealing 39 per cent of participants surveyed saw abuse against women and girls in their village in the previous year. The SHRR 2015 also confirmed data collected by the Samoa Family Health and Safety Study in 2007 indicating that almost half of women surveyed (46.6 per cent) aged 15-49 reported experiencing physical, emotional, or sexual violence by an intimate partner.

Public testimonies from survivors and stakeholders have been heard by the Inquiry over a three-week period focusing primarily on the violence experienced by Samoa's women and girls. 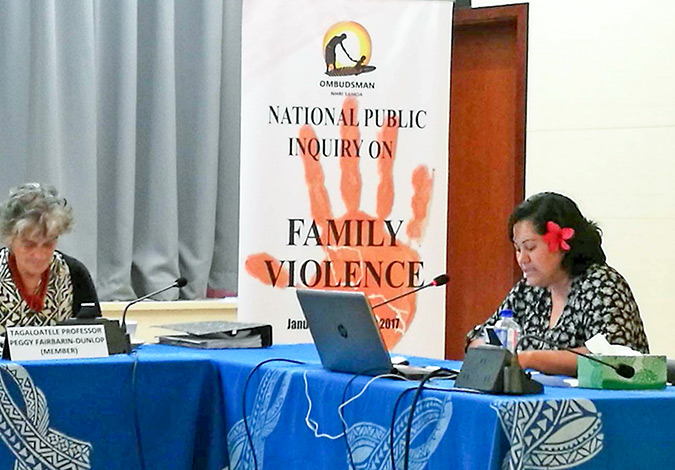 "UN Women is proud to provide a public platform for these brave survivors to not only share their stories but to give recommendations on how their needs can be better met by service providers and Government," said Suisala Mele Maualaivao, Country Programme Coordinator for the Samoa field presence for the UN Women Multi-Country Office in Fiji.

"Family violence is a serious issue in Samoa" according to Loukinikini Vili, Director of Human Rights at the Office of the Ombudsman and also the National Human Rights Institution, which led the groundbreaking Inquiry.

"It was clear from the findings of the first State of Human Rights Report 2015, supported by our Office, that many see family violence as a cultural norm," Ms Vili said.

"If the Inquiry's findings confirm this, it will want to know why and how this has become the situation in Samoa and it would want to make recommendations to address this belief," she said, adding that the next step now is the writing of the report based on all the evidence collected during the Inquiry. 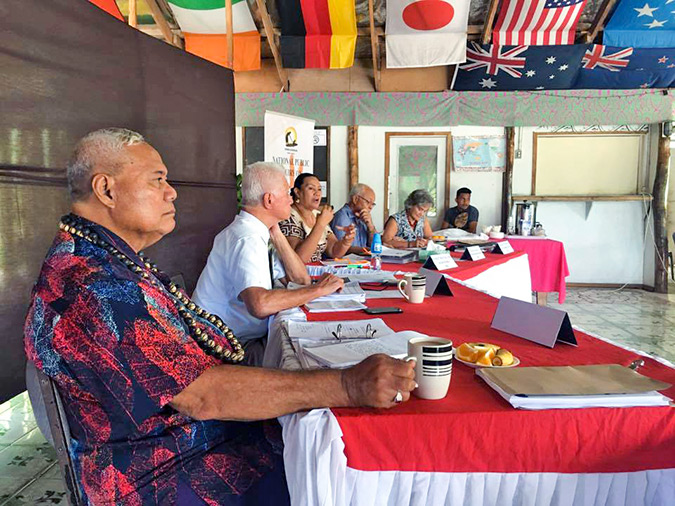 During a village visit the Inquiry heard from a Matai (Samoan chief who is head of a family or village) about the community's solution to a young, teenage girl's pregnancy.

"The village would impose a [financial] fine on the pregnant girl or her family, or banish her," the Matai informed the Inquiry. This punishment would be imposed regardless of whether the pregnancy resulted from rape or consenting sex; there are no impositions upon the father of the unborn child.

These were some of the insights heard by Inquiry participants and onlookers, with one commenting: "How are we going to tackle the issue of gender equality and family violence in Samoa if we don't first know where and what the problems are?" 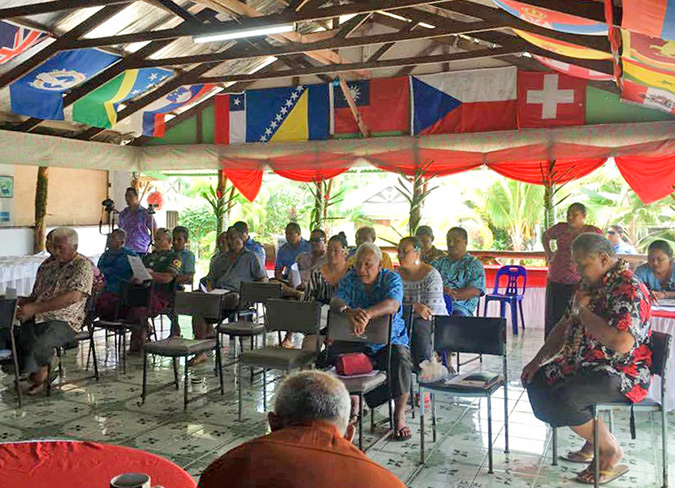 The hearings were open for the public to observe, ending 5 October, and follow the results of the second Samoa Family Safety Study released July 2017. The survey reveals an increase from 46 to 60 per cent, of violence against women aged 20-49 years, comparing the initial 2000 survey with the 2017 results, respectively.

Leautuliilagi Vanessa Schuster, from Barlow Schuster consult, used the Inquiry to highlight that "we need to treat Family Violence like we do Disaster Management."

"We need community mobilization and commitment the same way we do when a natural disaster occurs. We have a "human tsunami" happening that needs centralization and ownership by each citizen… we can ask our citizens to respond and be responsible; a truly national response!" she said. 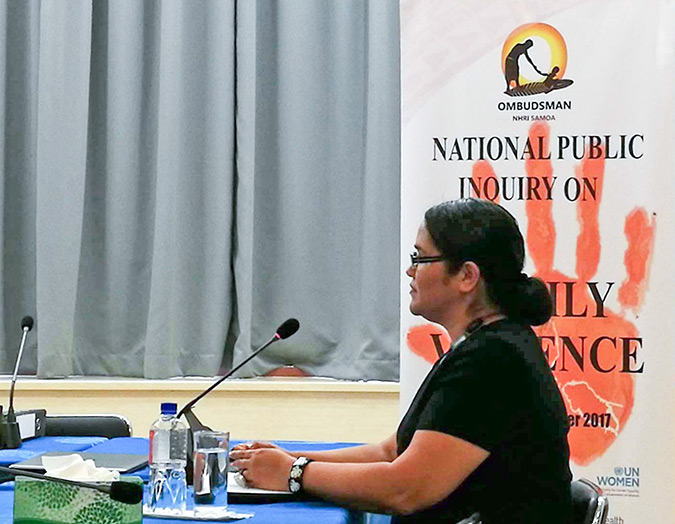 The Inquiry's recommendations have amplified to the broader public in Samoa existing, and some new, challenges ahead for Samoa to reduce its levels of violence against women and girls, according to UN Women's Mele Maualaivao.

"Family violence impacts so many women and their families in Samoa, so it is positive the Inquiry has contributed to making this a public health issue and called upon each of us, every citizen, to take an active role to help end this violation of human rights," Ms Maualaivao said, adding "we all deserve a life free from violence." 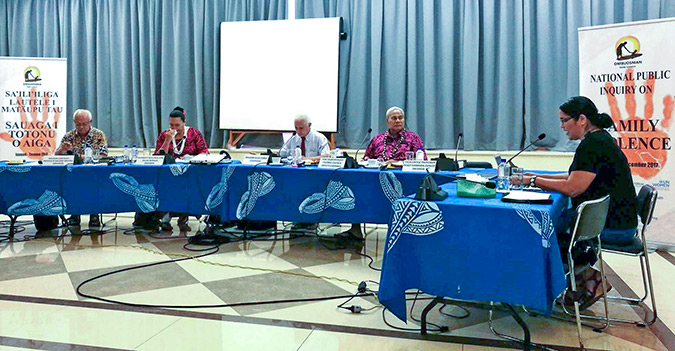