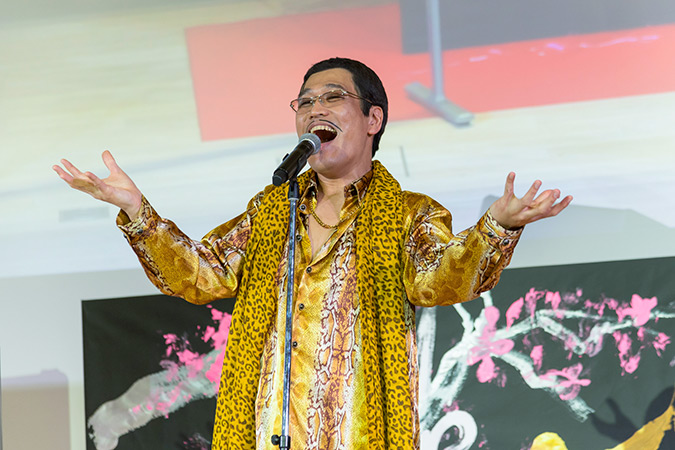 With these words, Japanese pop sensation PIKOTARO - star of the world famous "PPAP" - debuted his new collaboration with UN Women, "Gender Equal Peaceful World", in Tokyo on March 1. With his signature dance moves on full display, PIKOTARO performed live as part of a showcase of the successes of UN Women's regional programme on Preventing Violent Extremism "Empowered Women, Peaceful Communities", supported by the Government of Japan. 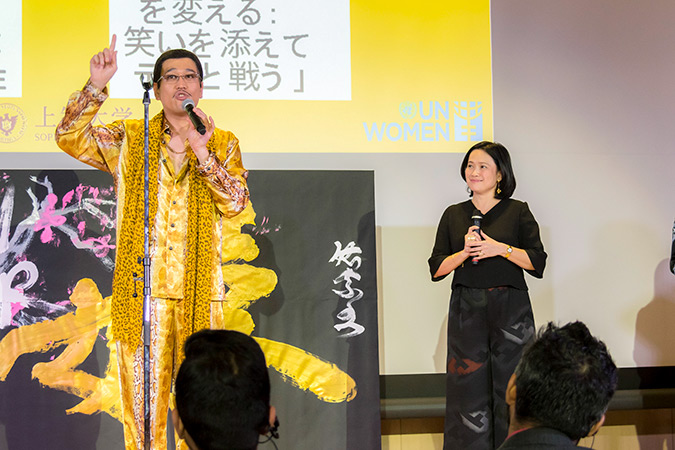 Through social media and online platforms, the new song reached over 2.2 million people in its first five days, proving that a creative and catchy tune can bring messages of gender equality to a fresh audience. 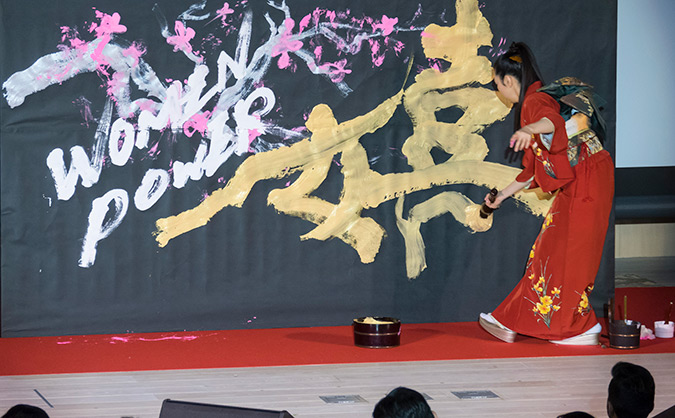 UN Women Asia and the Pacific Regional Director Miwa Kato and team worked with PIKOTARO to develop the lyrics of the song, connecting the concepts of 'gender equality' with a 'peaceful world', and highlighting the links between Sustainable Development Goal 5 on gender equality and Goal 16 on peace and justice, as part of this unique partnership. The video has gone viral and attracted media attention across Asia. 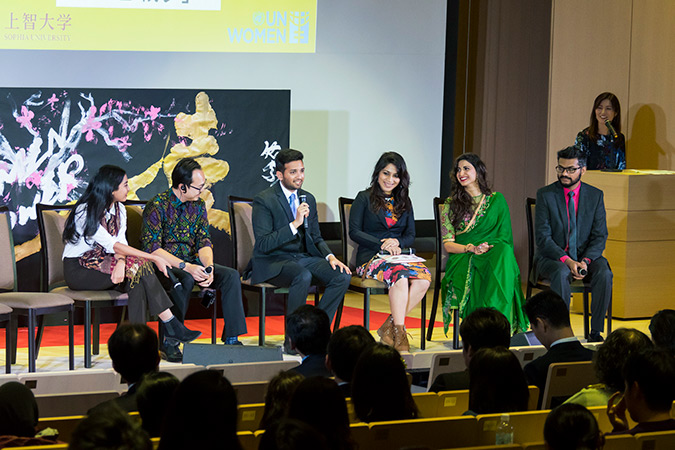 Performers share the stage for a panel discussion on the power of the arts to change gender social norms. Photo: UN Women/STORY CO., LTD

The performance was part of a dynamic event co-organized by UN Women and the Ministry of Foreign Affairs, Japan, "Transforming Gender Social Norms through Comedy: Fighting Terrorism One Laugh at a Time". People from all walks of life attended the prestigious Sophia University to learn about the importance of women's engagement in the prevention of violent extremism and how the clever use of strategic communications can help spread messages of peace. 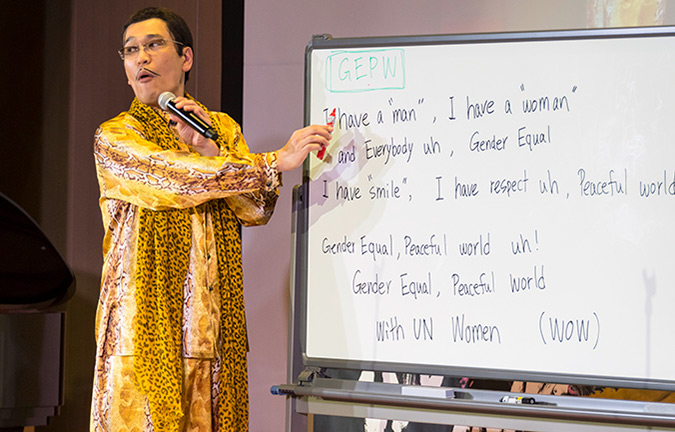 PIKOTARO explains the lyrics of his new song, stating that to have a peaceful world, we must consider everybody - men and women and everyone in between. Photo: UN Women/STORY CO., LTD

The event featured many prominent artists with a cause, including calligrapher Yuuna Okanishi presenting "嬉" with original tunes performed by Takashi Matsunaga on the piano.

Two YouTube comedy videos made under the programme were also launched. Both developed in partnership with Priyank Mathur's Mythos Labs, "Brainwash" made by Indian collective East India Comedy is a satirical take on a typical beauty product advertisement that challenges gender stereotypes aimed at a South Asian audience, and "HI-SIS", made by Indonesian comedians the Cameo Project, targets a Southeast Asian audience. 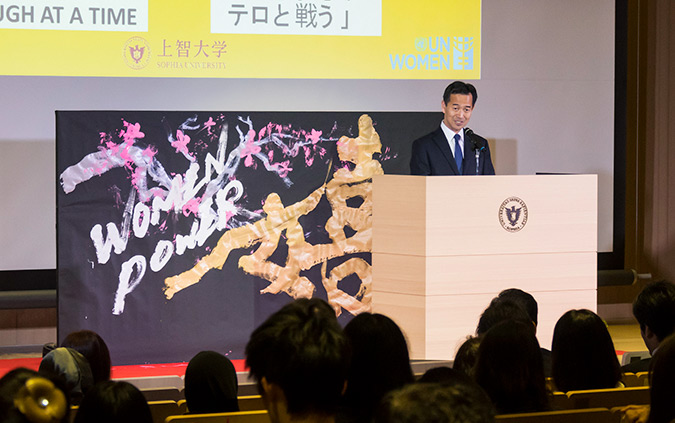 These performances and videos emphasized the value of alternative messaging to the narratives of violent extremist groups that exploit gender stereotypes in recruiting young men and women. Beyond what governments and the UN can do alone, working with social media influencers in localized settings reaches the exact audience that can benefit from messages of gender equality and peace. Within only 24 hours of its launch "Brainwash" had over 200,000 views, demonstrating the power of social media to engage young audiences.

Speaking at the event, Mitsunari Okamoto, Parliamentary Vice-Minister, Ministry of Foreign Affairs, Japan, said, "Through community engagement at the grassroots level, we will challenge intolerance by fostering dialogue and the power to oppose terrorist messaging." 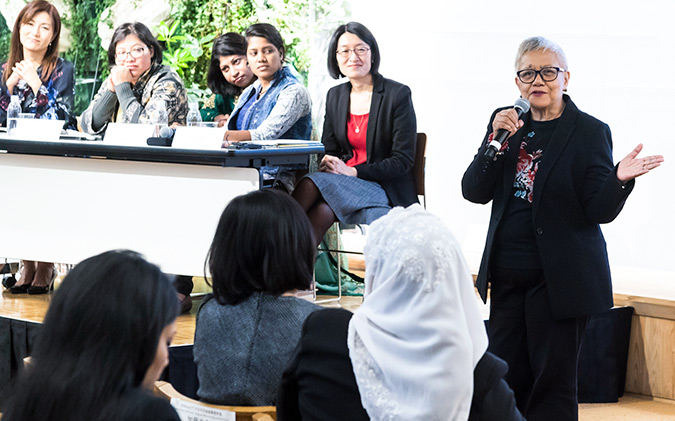 The event came at the conclusion of the regional conference "Women and their Role in Creating Peaceful Societies and in Preventing Violent Extremism", which brought together representatives from Indonesia, Bangladesh and the Philippines, as well as researchers, academics, practitioners, the private sector and media - all who have been engaged under the "Empowered Women, Peaceful Communities" project to share their perspectives. 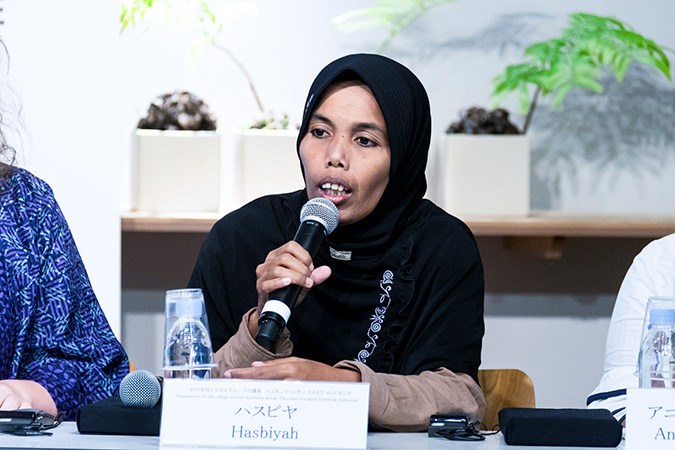 Hasbiyah is working with the UN Women programme in Indonesia. Of the impact the project has made on her community, she says "We want this programme to be sustainable so we approached figures in our community who were intimidated to be involved, but they have now found the courage to be involved in the programme and to declare their village a peace village." Photo: UN Women/STORY CO., LTD

Women from Bangladesh and Indonesia who have been a part of the programme in their villages shared their experiences of how it has improved their economic empowerment and built their capacity to be leaders for peace.

Hasbiyah shared her story of transformative change through the programme in her village in Indonesia: "After we joined, we learned how to implement the values of pluralism and tolerance, including equality, and trained to deal with issues that arise in our village, and to become more empowered women." 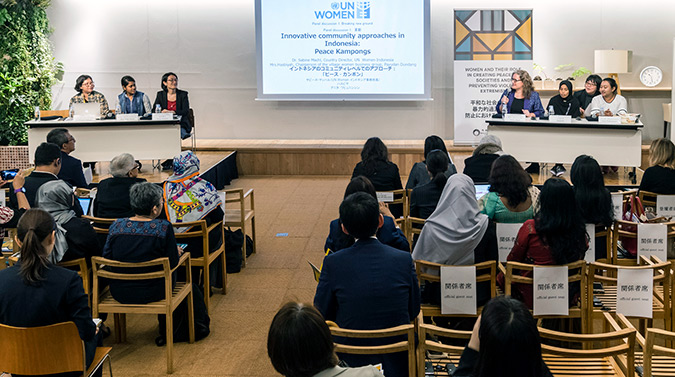 Representatives from the grassroots level in Indonesia and Bangladesh discuss the changes they have seen in their communities since the start of the UN Women programme. Photo: UN Women/STORY CO., LTD 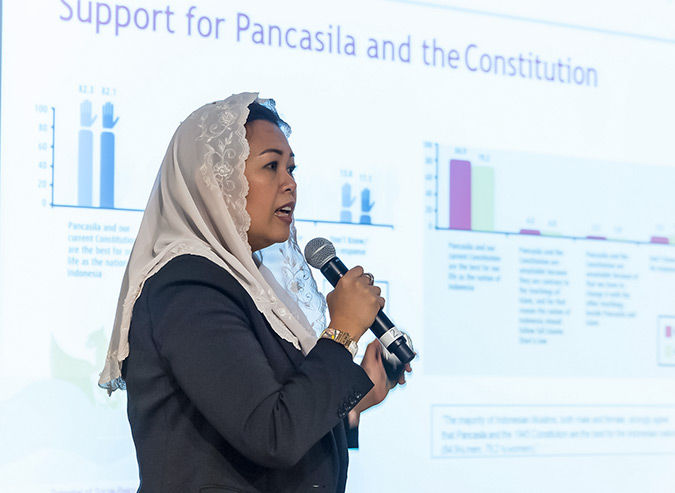 Yenny Wahid, founder of the Wahid Foundation, presents the research finding that approximately 1 in 3 Muslim women in Indonesia is willing to participate in radical activities through material donation. Photo: UN Women/STORY CO., LTD

The conference launched three unique pieces of research commissioned under the programme, including the first ever sex-disaggregated national survey in Indonesia on the threat of violent extremism among Muslim men and women, conducted with the Wahid Foundation.

Moonshot CVE launched the first ever sex-disaggregated data across the region tracking where appetite for extremist material is greatest online. Preliminary findings show that in Bangladesh, women account for 11 percent of those searching for extremist materials, while in Malaysia women account for nearly 50 percent of those seeking out this content. The research also found that women who are prone to engage in violent extremism will do so more often in private spaces rather than public ones. 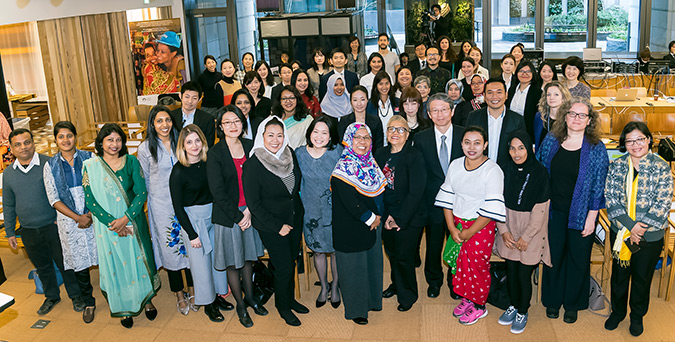 An independent research analysis conducted by Monash University on the impact of the "Empowered Women, Peaceful Communities" programme was also launched. Monash University's findings concluded that women engaged in the programme in Bangladesh and Indonesia were much more aware than women in non-programme sites of the problem of violent extremism and their roles in preventing it. 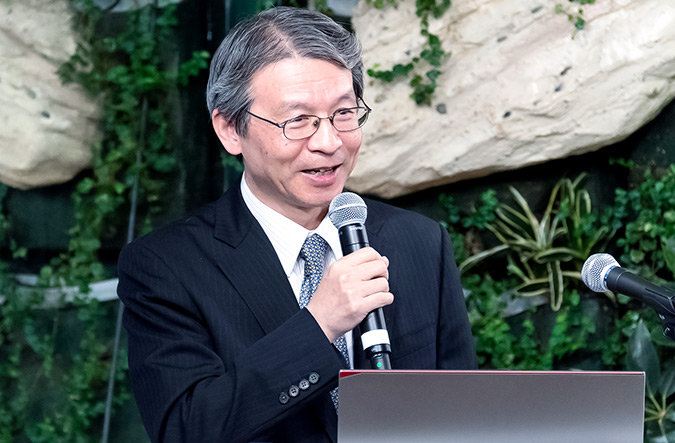 With the successes of the project on full display, Masato Otaka, Ministry of Foreign Affairs, Japan pledged to his government's continued support of this work: "Japan places emphasis on women's point of view, the empowerment of women in measures against violent extremism, and we will continue to actively support UN Women's activities".

UN Women's Regional Director summarized the day's events by urging the audience to join UN Women's call for action towards women's empowerment and peace - "join us in strengthening alternative messaging, such as comedy. When the screen loads on your phone, join us in sharing, liking and creating videos that promote simple and powerful truths - that women and men are equal, that women's rights must be respected, that women's empowerment must be promoted and that our communities, our region and the world is better and more peaceful for it." 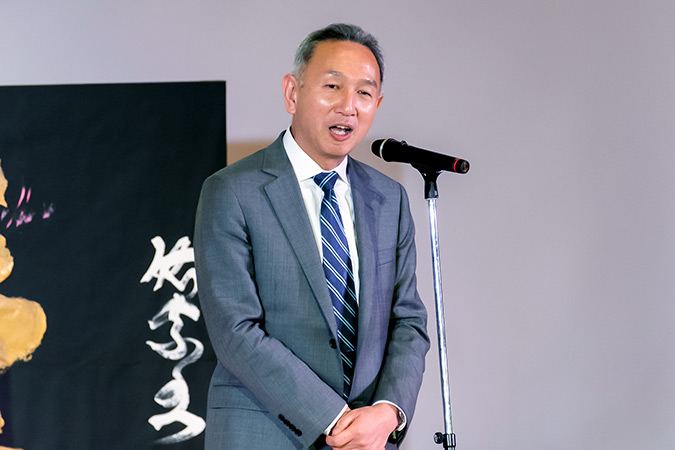 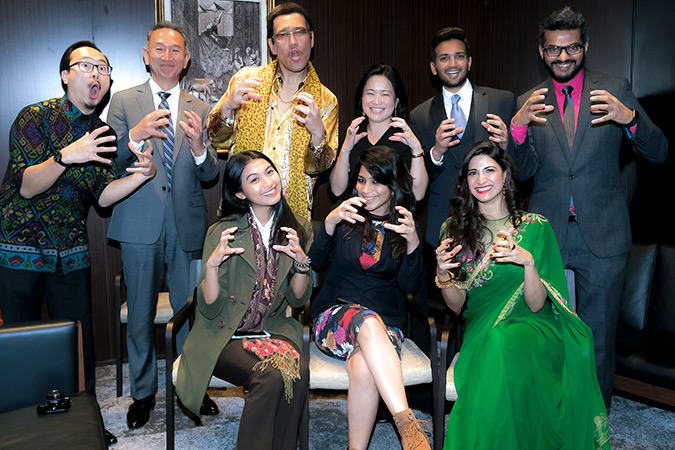 At the end of the day, performers and expert participants in the evening event pose with PIKOTARO's signature move while backstage at a press conference with Japanese and international media. Photo: UN Women/STORY CO., LTD 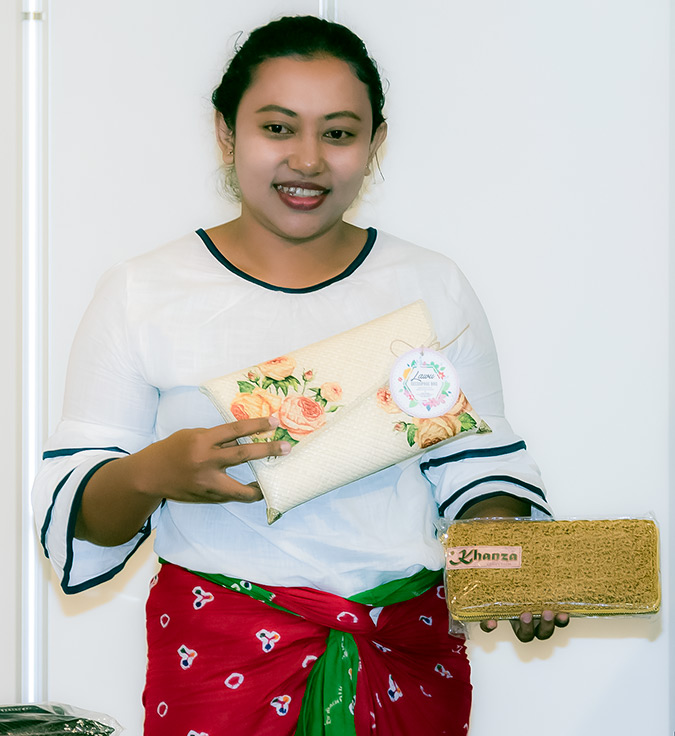 Anita is the mother of an 8-year-old son. She also manages a catering business. She is involved in a women's group called Srikandi, which runs a business of producing tofu, salted eggs, and organic flavored rice crackers. She plays an active role as a coordinator in Jetis Village, South Klaten, Central Java, and is involved in the women's group and village organization. She joined the UN Women programme, run in partnership with the Wahid Foundation, and formed a group to promote the empowerment of women, and community cohesion and tolerance.

"The women now have the courage to join in the village meetings and voice their opinions on matters including peace and tolerance. As a Catholic, I now have a group together with Muslims, making products together at my house." 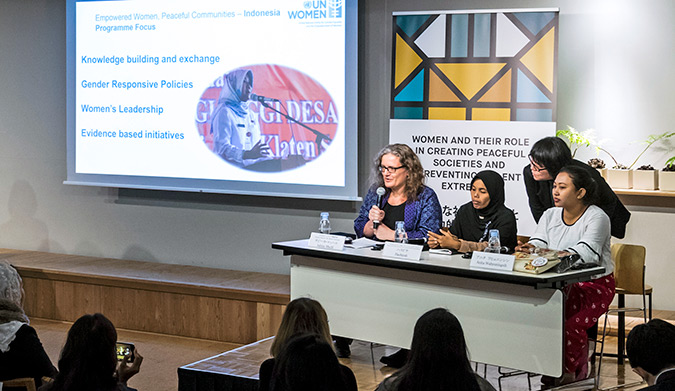