Dili, Timor-Leste — “I was taken to Otel Flamboyan [now Pousada in Baucau] by the Indonesian military. They would bring me to the bathroom and push me to take a bath. Take a bath, take a bath, they said. Then they would throw me on the bed and they would take turns to rape me.,” said Maria de Fatima, a survivor from Timor-Leste reflecting on her time as a captive of the Indonesian military during the occupation. 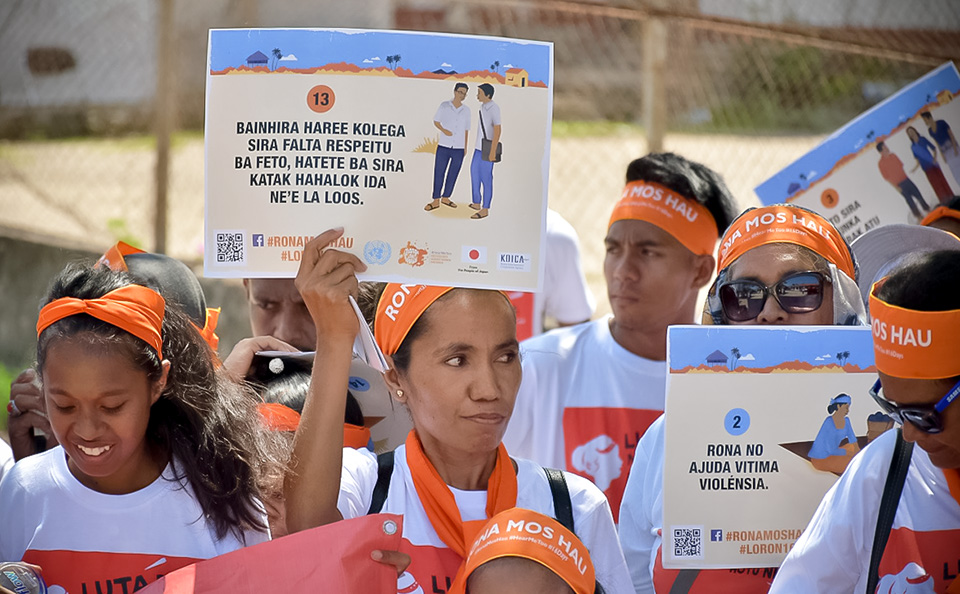 Participant in Walk to Remember holding a poster asking to speak up against violence against women. Photo: UN Women/Kyeongrang Park

A hundred people from Baucau joined Mana Maria de Fatima and six other survivors of the past conflict on 7 December in a March to Remember, to hear the survivors’ stories and learn from their experiences, during a historic tour of the city of Baucau.

When things went bad between the militants and the resistance fighters in the mountains, it was often the women who were punished. In addition to being tortured, many of the women survivors were often raped by the military at various stations and homes around town.

“Why does the Government not value our fighting? We did not hold a gun, but we gave our body and spirit to defend our nation,” said Maria Da Gloria Lemos, another survivor on the tour.

“My mother was 14 when she was raped by the Indonesian military” said Luis da Costa, son of Celestina da Costa, during the tour. “It breaks my heart when I see the current violence in Baucau.”[1] 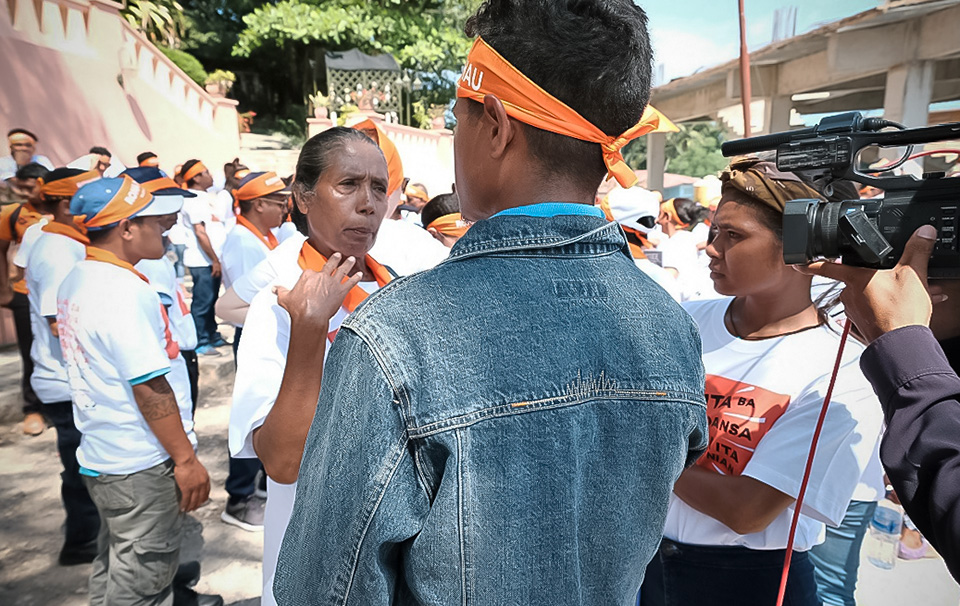 Maria de Fatima, survivor of past conflict, talking to the National Television about her story. Photo: UN Women/Camille Wauterd

He called for young men to respect women and stop the violence. Despite the occupation ending almost 20 years ago, in 1999, gender-based violence still remains a major problem in Timor-Leste. More than 1 in 10 women are raped in their lifetime, according to recent research.[2] Many also experience sexual harassment and do not feel comfortable walking around in their own communities.

“Women and girls, including survivors, are now experiencing violence from their own people,” said Manuela Leong Pereira, Director of the local NGO Asosiasaun Chega! Ba Ita. The organization seeks the recognition of women survivors of conflict and their current meaningful participation in leadership and nation-building processes.

Many survivors and their families expressed the same concern during the tour. “I tell my story because I don’t want the new generation to become victims of violence,” said Maria de Fatima. “The activity was organized as part of the 16 days Campaign to End Violence against Women. “Women contributed to, and suffered for, the independence of Timor-Leste. However, today their stories are marginalized and ignored. Survivors of sexual violence are being shunned by society,” said Sunita Caminha, Head of UN Women in Timor-Leste. “During this 16 days campaign we endeavour to get their voices heard.”

Asosiasaun Chega! Ba Ita—with support from UN Women and financial contribution from the Government of Japan—has worked jointly with other partners including: Centru Nacional Chega, PNTL, UNDP, World Vision, Ba Futuru and Fokupers to organize this two-day series of activities to help young people learn from the past.

[1] A free copy of the survivors’ historical tour of Baucau is now available online in Tetum and English.