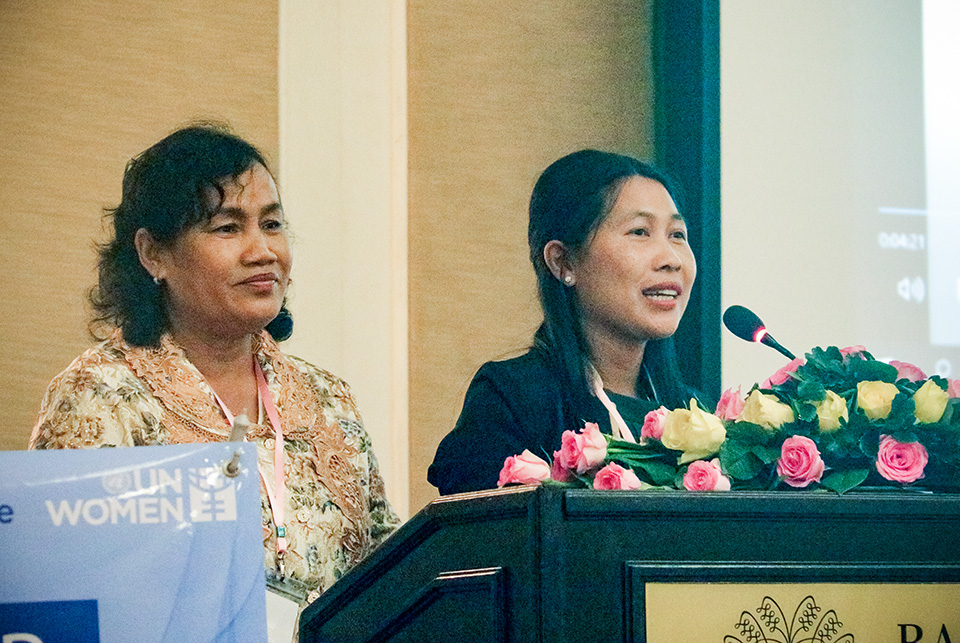 At the 29 August meeting, Noeu Siphon, left, and Hang Samoeun speak out about the needs of their communities and women’s experiences with climate change. Photo: UN Women/Sreynich Leng"

The Cambodia project is part of a larger project that UN women is jointly coordinating with UN Environment in Asia-Pacific countries. The Government of Sweden funds the project, which runs from 2018 to 2022 and is called The Empower: Empowering Women to Secure Climate-resilient Societies.

About 70 delegates took part in the 29 August meeting in Phnom Penh that started the project in Cambodia. They included members of women’s groups from provinces most vulnerable to climate change.

The delegates discussed how climate change and disaster risk reduction concerns are considered in current national policies, what results have been achieved, and what adjustments are needed to improve those policies and results.

They divided into small groups and exchanged ideas on:

Two members of women’s groups raised the concerns of their local communities.

For Hang Samoeun, a member of a women’s group from Kompot province, it was the first time she had spoken on stage before high-level Government officials. She said she was nervous but also proud and honoured to speak out for her community’s needs.

“Back in my community, the problems that we mostly face are floods, strong winds and drought,” she said.

Noeu Siphon, a member of a women’s group from Pusat province, said that she was delighted to be able to learn from Government officials, and that she would share what she learned with other people in her community and encourage more women to take part activities on this issue.

Siphon said that it was only in attending the meeting that she realized how important it was for women to contribute to efforts to solve problems caused by climate change and natural disasters. “I think women understand women better than men do, so women would find better solutions to the problems they face,” she said.

Sarah Knibbs, acting Country Representative of UN Women Cambodia, said the meeting played an important role in bringing together the ideas of all the parties involved on how to proceed with The Empower project. It also started the process of mainstreaming gender issues in climate change adaptation and disaster risk reduction, she added.

Chuop Paris, Deputy Secretary General, National Council for Sustainable Development General Secretariat, said that all levels of Government, from the line ministries to the communes, must improve their ability to deal with these problems.

Related News
08/07/2019
Stepping in: Women must lead in dealing with natural disasters in Cambodia
25/03/2019
In rural Cambodia, biogas helps offset the effects of climate change
21/02/2020
Viet Nam’s journalists learn how to report on women and risks of climate change
20/02/2020
Film made by women shows women struggling with climate change in Fiji
06/12/2019
Vegetable gardens bring veritable gains for women in climate-struck Cambodia
END_OF_DOCUMENT_TOKEN_TO_BE_REPLACED