Every morning at 10 a.m., Sok Sopheap sets off to run errands and pick up her two grandchildren from school in Tropang Thom village, southern Cambodia. Sopheap is in her 50’s – a stage in life when many women in her country might slow down – but like many local women, she is bearing an increasingly heavy burden as a result of climate change. 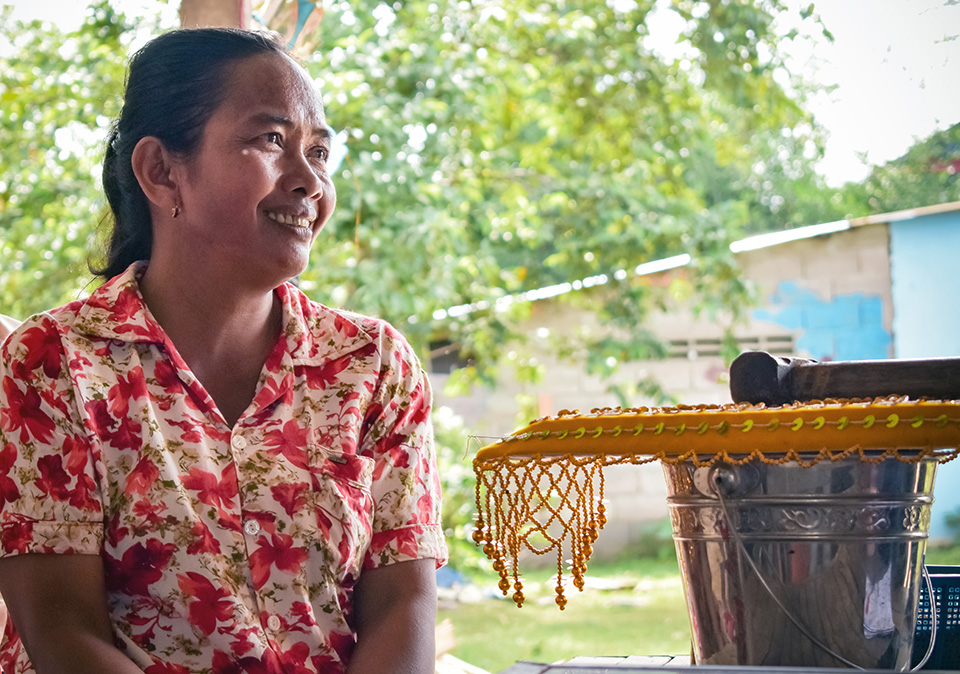 Sok Sopheap used to spend the bulk of her time on household chores and care, but thanks to a sustainable solution, she now has time to make handicrafts and mobilize fellow women. Photo: UN Environment and UN Women/Prashanthi Subramaniam

Like other villages in Takeo province, Tropang Thom has been in the grip of an oscillating water crisis. During some months, taps and waterways run dry, paddy fields whither and villagers must walk 15 to 20 kilometres to collect water; while at other times, the sudden onslaught of rain floods villages and washes crops away.

“The rice calendar no longer matches the weather calendar,” one villager laments, during a community consultation that Sopheap attended, with other villagers echoing the sentiment. Organized by UN Women and UN Environment, the consultation in Takeo came on the heels of a national-level consultation in Phnom Penh in September 2018 to better understand how climate change and natural disasters are affecting women and men differently, and how women can be a fountain of solutions for climate action. 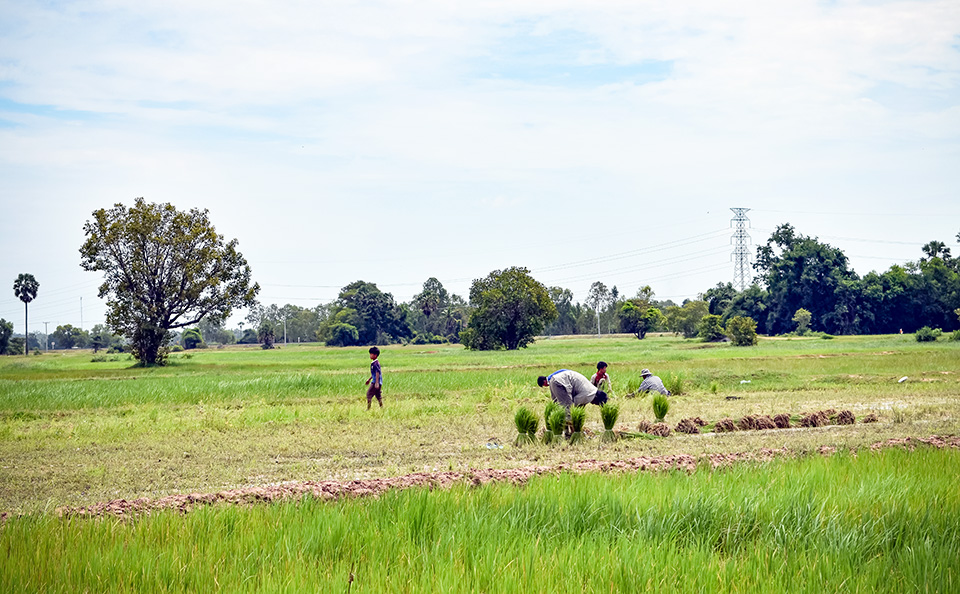 Droughts and water scarcity due to climate change are affecting the productivity of farms in rural Cambodia. Photo: UN Environment and UN Women/Prashanthi Subramaniam

“There are some challenges for me to share knowledge and information about climate adaptation and disaster risks with other women because they have limited understanding and knowledge regarding gender issues and climate change,” admitted Neou Siphon, from Pusat Province, while welcoming the guidance and strategies that UN Women and UN Environment will aim to provide.

In Tropang Thom, with declining crop yields, households in these traditionally agricultural communities are being forced to think about how they can make a more predictable living. While young men migrate to the urban centres in search of jobs, women and children are often left behind in the villages. Younger women spend the week working late hours in textile mills nearby, while older women tend the fields, take care of children and bear most of the domestic responsibilities. On weekends, the younger women take their turn doing the farming. 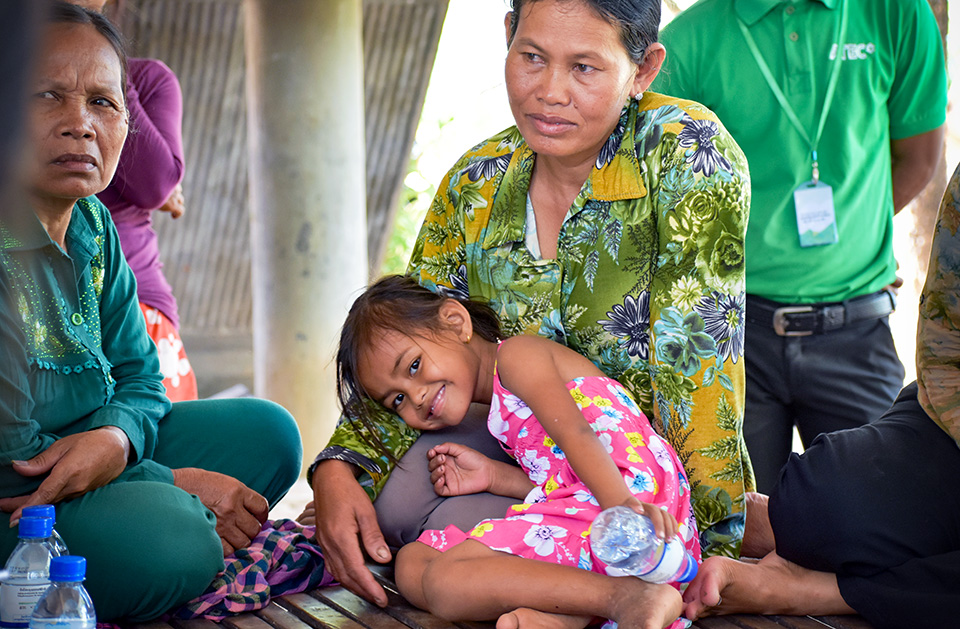 Many village women attended the consultations in Takeo to learn and offer solutions to improve the prospects for future generations. Photo: UN Environment and UN Women/Prashanthi Subramaniam

Sopheap’s own story was no different. While tending to her small farm, managing livestock, cooking, buying fuelwood, cleaning and caring for her grandchildren while her children were away all week, the double-burden was slowly growing heavier as she aged and as demands intensified – stretching her patience as well as the family’s meagre income. Multiple generations of women are trapped by climate change in this way, caught in a vicious cycle of working inordinately for decreasing returns, with few able to break free.

Then, a couple of years ago, Sopheap had the foresight to invest in a biogas pipeline fitted to her home with the support of a local enterprise. She was the first woman in the village to do so and is now one of a handful using biogas, run on organic manure sourced straight from her cow-shed. This simple, clean and cost-saving renewable energy has eased her workload and set a positive example she is quick to share with others. 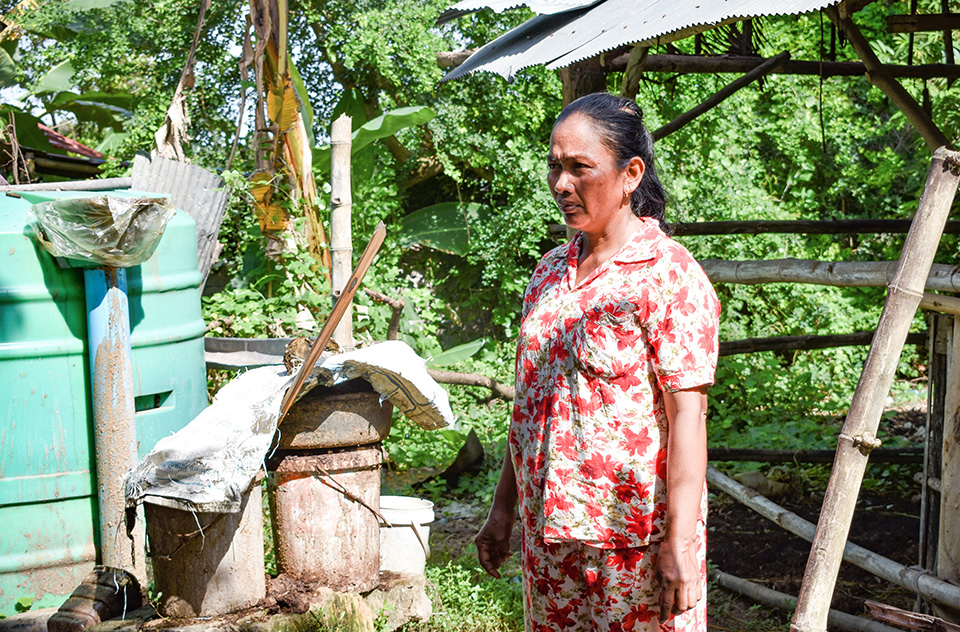 Collecting, chopping and cleaning firewood used to be among the long list of Sopheap’s daily chores. Photo: UN Environment and UN Women/Prashanthi Subramaniam

Nearly 85 per cent of rural Cambodia relies on firewood and as prices kept rising, for Sopheap, breaking this habit was in many ways transformative. Not only has she saved money in the long-run by switching to biogas, but cooking and heating water now goes much faster, and she no longer has to collect or buy, chop and clean firewood.

“While this [biogas digester] was initially an investment and we were new to it, I am now able to easily operate it and I now have more time for other things,” says Sopheap. 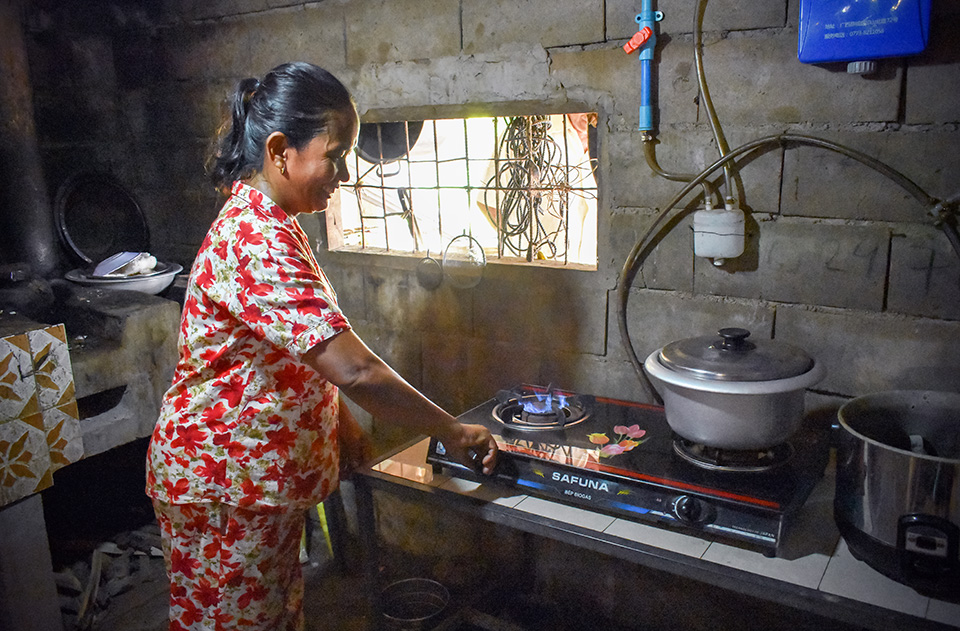 Sopheap has since also invested in an electric rice cooker modified to use with biogas, saving her even more time. Photo: UN Environment and UN Women/Prashanthi Subramaniam

She now spends that spare time making handicrafts to sell, doting on her grandchildren, and volunteering as a community health worker, mobilizing other women and youth around health issues, while also raising awareness about sustainable energy and cleaner fuels.

Women like Sopheap are often the first movers to adopt new technology and knowledge in communities where resistance to change is high. Even among older women like her, there is a growing acceptance of new solutions and increasing awareness of their ability to lead change. Many are even leveraging their personal networks to help deal with the impacts of climate change, using social media or face-to-face contact to warn each other of climate disasters and to access information faster. 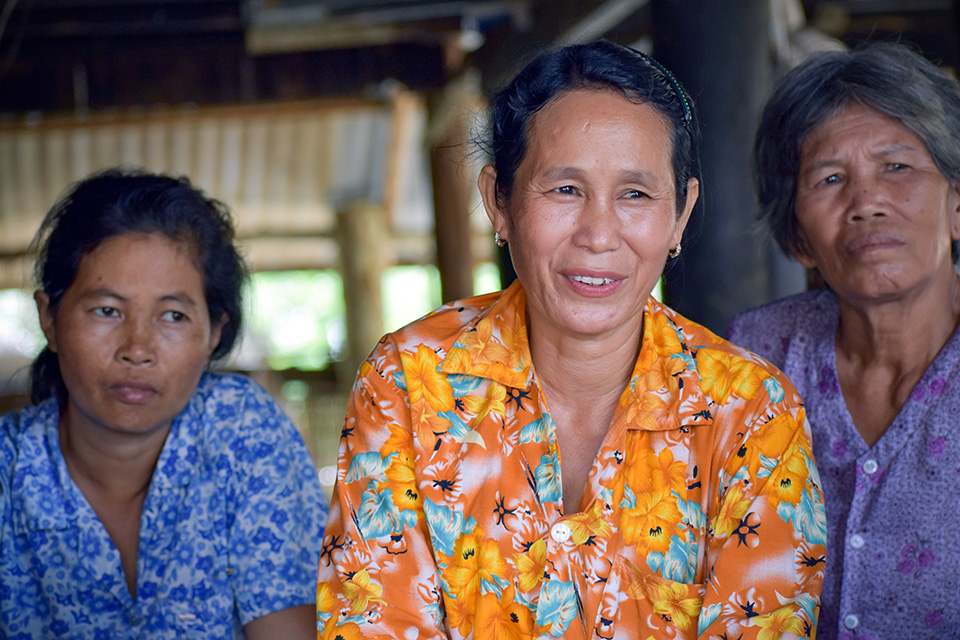 Women in Takeo province aired their concerns and priorities about the effects of climate change and water scarcity in their lives at the community consultations. Photo: UN Environment and UN Women/Prashanthi Subramaniam

To ensure that gender equality and human rights are at the heart of climate action and disaster risk reduction, UN Women and UN Environment are jointly implementing the “EmPower: Women for Climate-Resilient Societies” project with the support of the Swedish Development Cooperation Agency. The consultations helped lay the foundation for the project, which will run from 2018-2022 in Bangladesh, Cambodia, Viet Nam and regionally in Asia-Pacific. It seeks to ensure that women can participate in climate policy decisions, leverage both traditional knowledge as well as sex-age-diversity disaggregated data for decisions, influence climate and disaster policies and access more resilient livelihoods through renewable energy. 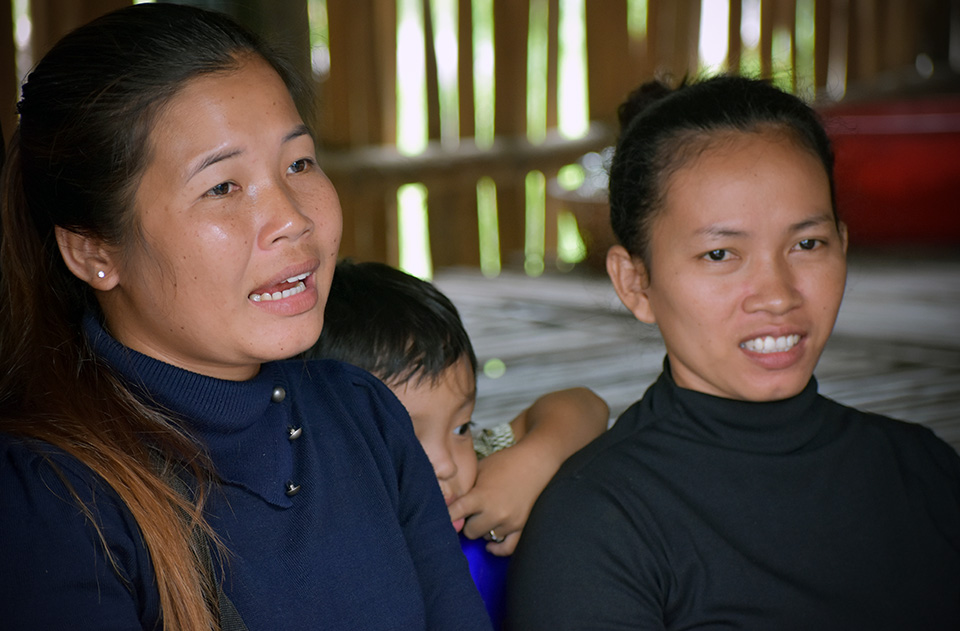 Relying on their interpersonal networks, women are sharing the benefits of raising their voices for climate action and using renewable energy. Photo: UN Environment and UN Women/Prashanthi Subramaniam

There has been a corresponding push to ensure that gender equality is reflected in Cambodia’s climate change plans, policies and strategies, with the Ministry of Environment emphasizing the great value of women participating, articulating their needs and driving change at the local level. 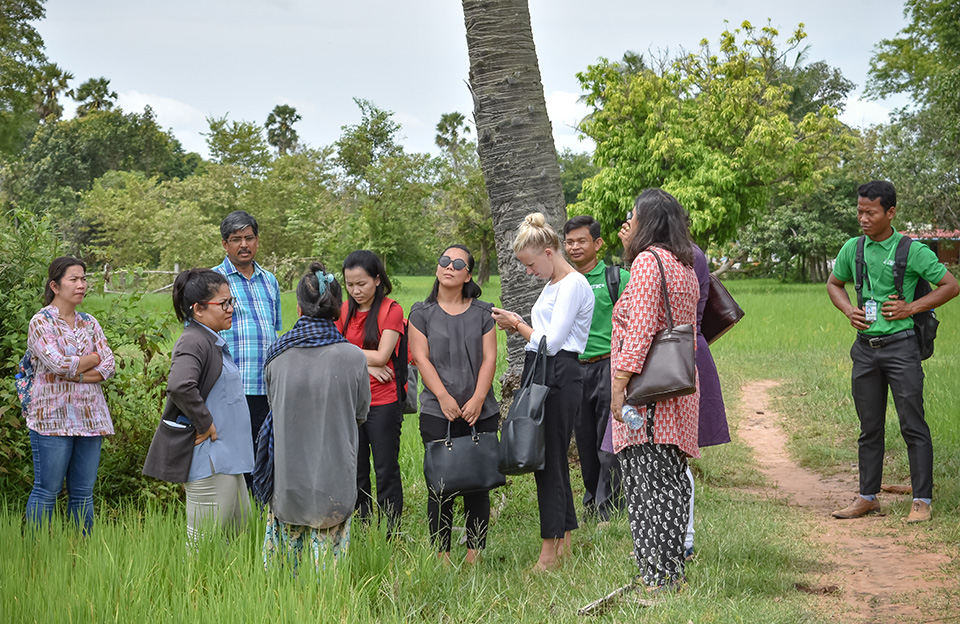 “Women are the backbone and breadwinners of Cambodia,” says Oum Sophy, Under-Secretary of State, Ministry of Environment. “We need to engage them, encourage them and provide more information so they can build awareness and deal with climate change better.”

Related News
10/05/2021
Marginalized women and girls need better representation to fight impacts of climate change and Covid
06/12/2019
Vegetable gardens bring veritable gains for women in climate-struck Cambodia
08/07/2019
Stepping in: Women must lead in dealing with natural disasters in Cambodia
16/11/2018
Project to empower women in climate change decisions begins in Cambodia
14/03/2022
Women need to be engaged as leaders and agents of change in addressing challenges linked to climate change, the environment and disaster risk reduction
END_OF_DOCUMENT_TOKEN_TO_BE_REPLACED