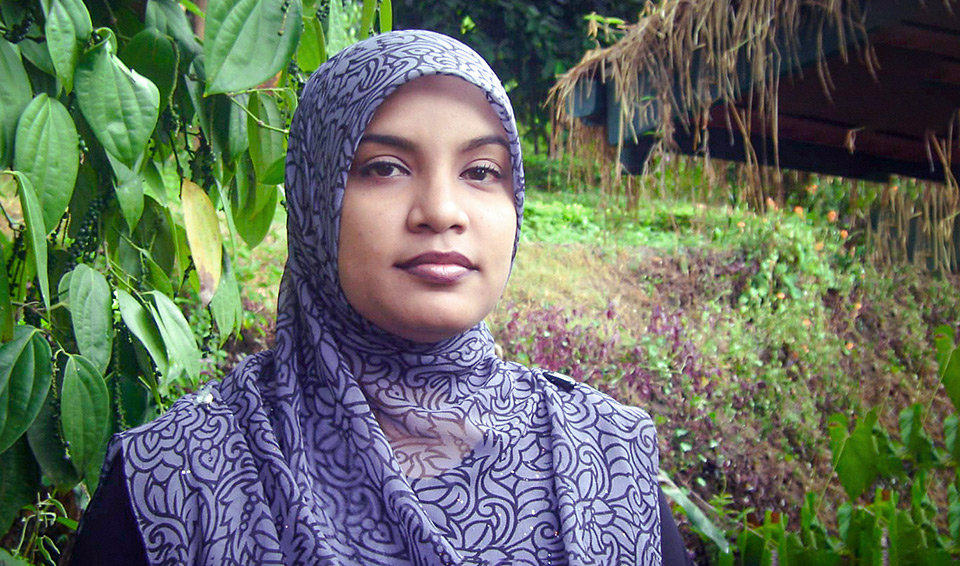 “When I was 18 years old, I used to ride a motorbike. I was probably the only girl to do so in my village in Puttalam, [in northwestern] Sri Lanka. Many questioned my father for giving me the freedom to do something that was typically performed by men. Such life experiences have always left me questioning the inequality between men and women. I needed to change the social norms that have constricted women to be weak and dependent and have pushed them to unequal positions compared to men.

Living with multiple and intersecting inequalities

During the war, after our community was forcibly evicted from the North, I was discriminated against in school for being a displaced person. When my father died, my mother shouldered the burdens of the family. I witnessed how the society treated my mother as a displaced Muslim woman. When I was old enough to work, I was employed in organisations that were led by men and was subjected to sexual harassment in the workplace. I did not have a father or a brother to defend me and was vulnerable to abuse. When I left those workplaces within a short time, I went home crying to my mother, questioning whether it was my fault. But my mother affirmed me that the fault was theirs, not mine.

“Women must be represented at every level of society, and they should be economically independent and free of harm.”

When I worked in the North, I saw numerous displaced women and the growing number of women-headed households. These women were facing many challenges. Their economic survival was threatened, and sexual and gender-based violence was prevalent. The countless stories of inequality, oppression and violence encouraged me to work for women. I wanted to empower and strengthen women to be leaders and changemakers. This is when my career in politics began.

My work focuses on reforming the Muslim Marriage and Divorce Act of Sri Lanka so that women can feel safe in their own homes. I also work with many war-affected women in the north of Sri Lanka to address issues such as displacement and dispossession of lands.

In my work, I tend to look beyond the mere provision of aid and focus on the economic empowerment of women, so they’re financially independent. Many women undergo violence because of their lack of financial independence. We can change this narrative by freeing them from the clutches of economic dependency on men. We are currently in the process of creating a collective of women entrepreneurs to support and empower them to recover from the COVID-19 pandemic.

As a forerunner of gender equality and a woman leader in politics in a patriarchal society, I have often been threatened and verbally abused. My image was harmed and my actions were violently opposed. These experiences have shattered me.

A call to support women and girls/strong>

Empowering women and girls should start in the family. When my father was alive, he used to wake up in the morning and prepare us for school. When I started to work on advancing women’s rights later in my life, my mother was afraid of the harm I was exposed to, but she was brave and she believed in me. My husband is an immense source of strength as well.

When I was 18 years old and people questioned me for riding a motorbike, it was my father who silenced them, saying, ‘I will not restrict my daughter because she’s a girl. Let her do what she wants.’

Bisliya Bhutto is a human rights activist and a member of the Urban Council in Sri Lanka. She has extensive experience in peace-building amongTamil and Muslim communities, and addressing online harassment and sexual and gender-based violence. She is currently supporting women’s economic empowerment programmes in Puttalam, in northwestern Sri Lanka. As the Generation Equality Forum – a landmark event to catalyze rapid advancement on gender equality – approaches, she calls for creating safe spaces for women’s participation in politics. The Forum is convened by UN Women and co-hosted by the governments of Mexico and France, in partnership with youth and civil society.