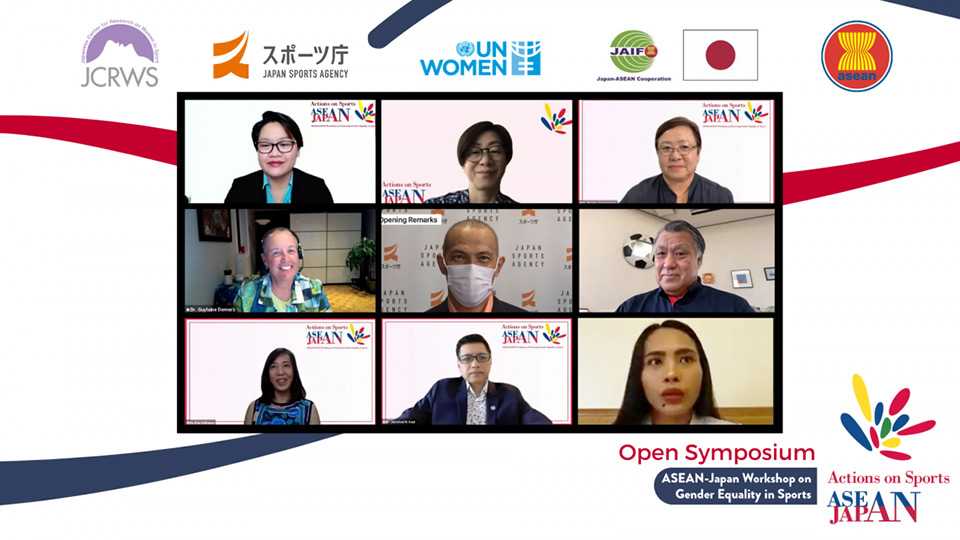 Tokyo, Japan — In the spirit of the Tokyo 2020 Olympic and Paralympic Games, the Japanese Center for Research on Women in Sport (JCRWS) of Juntendo University co-organised the Open Symposium on Gender Equality in Sports with the Japan Sports Agency (JSA) and ASEAN Secretariat, and support from the UN Women. The Symposium is part of the four-day ASEAN-Japan Workshop on Gender Equality in Sports held from 10 to 13 August.

In line with the ASEAN Community Vision 2025 and Sustainable Development Goal (SDG) 5: Achieve Gender Equality and Empower All Women and Girls, the symposium and workshop aim to strengthen cooperation between ASEAN and Japan towards achieving a gender-equal society.

Over 70 participants consisting of government officials, representatives of the Women in Sports Commissions of the National Olympic Committees, young female sports leaders and youth leaders of the UNESCO’s Youth Task Force on Sports for SDGs, gathered online to develop a feasible action plan to empower women in and through sports.

The opening session highlighted ASEAN’s commitments on gender equality and mainstreaming, among others in decision-making processes. They include COVID-19 recovery efforts; the progress of promoting gender equality in sports since the 1994 Brighton Declaration; and existing gaps in women’s participation, achievements and leadership in sports, including equal pay and media coverage.

In her keynote address, Director Babaran noted that “sports stakeholders need to think beyond women’s and girl’s achievements in sports activities and competitions and start paying attention to women’s leadership and career paths in sports institutions, as well as their safety and protection.”

Other discussion topics included ASEAN female athletes’ major achievements in the recent Tokyo 2020 Olympic Games. “As the leader of the Sports for Generation Equality Initiative, UN Women will continue working vigorously with all stakeholders in the sports ecosystem to accelerate efforts to promote women’s participation and leadership in sports. Together, we can create more equal opportunities for women athletes and inspire the next generation of girls to challenge gender stereotypes and reach their full potential,” said Kazi.

The second symposium session focused on the impacts of women role models. Speaking in this session were Dr. Guylaine Demers from Laval University Canada, Kaori Yamaguchi, an Olympic Bronze Medalist and Ni Nengah Widiasih, a Paralympic Bronze Medalist who is also part of the Indonesian National Para Powerlifting Team for the upcoming Tokyo 2020 Paralympics. They exchanged experiences and insights on the importance of normalising women’s achievements and leadership in professional sports.

In her closing remarks, Director of UN Women Japan Liaison Office Kae Ishikawa highlighted the importance of this initiative towards achieving SDG5.

The four-day workshop employs a two-track approach, one tailored for policy makers and another one for young female leaders. Participants jointly formulated a set of policy recommendations to promote the participation of women and girls in sports through ASEAN cooperation and in the respective countries.

ASEAN-Japan Actions on Sports is a project under the ASEAN Plus Japan Senior Officials Meeting on Sports (SOMS+Japan) funded by the Japanese government through the Japan-ASEAN Integration Fund. A public awareness campaign on the participation of ASEAN women and girls in sports will take place in December 2021, involving ten prominent female sports ambassadors across the region.

Related News
14/11/2022
UN Women Goodwill Ambassador Anne Hathaway calls on leaders of the business community worldwide to put women at the heart of economic growth
14/11/2022
Unlocking the full potential of women in the economy
28/07/2022
National Counter Terrorism Agency and UN Women organize dialogue on gender-responsive policymaking to counter extremism in Indonesia
15/07/2022
UN Women works with the Government and civil society on training to protect women and children from conflicts in Aceh, Indonesia
12/07/2022
Statement on the assassination of His Excellency and HeForShe Champion Shinzo Abe
END_OF_DOCUMENT_TOKEN_TO_BE_REPLACED