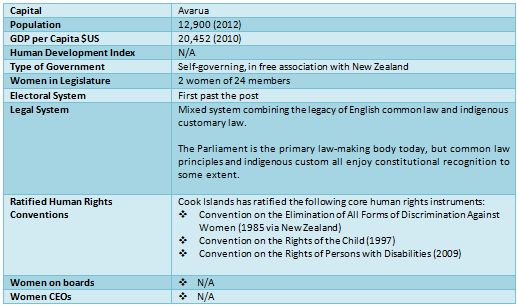 Cook Islands is a nation comprised of 15 islands spread over 2 million sq. km. in the Pacific Ocean, to the east of Fiji and northeast of New Zealand. All islands are inhabited and Rarotonga, the centre of governance and commerce, is the most populous. The economy is dependent on tourism, with fishing, agriculture and financial services also contributing significantly. Cook Islands is an economically stable democracy with strong support from New Zealand, which retains responsibility for external affairs and defence in consultation with Cook Islands.

In cases of sexual violence, evidence of the victim’s prior sexual conduct with the accused can be admitted to prove consent. Cook Islands also applies the common law rule requiring proof of physical resistance in order to establish lack of consent.  Cook Islands law does not recognise marital rape as a crime.

Cook Islands has no provision for compulsory maternity leave, however, in the event of divorce, the country does recognise both financial and non-financial contributions to a marriage when dividing property.

There is very little reliable data on violence against women in Cook Islands, but anecdotal evidence suggests that domestic violence is widely prevalent but under-reported. Police records show around five assaults on females each month – approximately half of all reported violent crimes and 10% of all recorded offences[1]. There is a high number of teenage pregnancies in Cook Islands, many of which are the result of abuse, rape and incest.

There is little data available on women’s economic opportunities in Cook Islands. Women make up 55% of Cook Islands’ non-agricultural sector and unemployment rates for women are 7.3%, compared with 6.7% for men[1]. The balance of male to female employment is more equitable on the island of Rarotonga when compared with the Northern and Southern island groups (76.2%/71% compared to 56.7%/46.4% and 59.5%/45.5%, respectively)[1].

About 98% of the urban population has access to a clean water supply and 100% has adequate sanitation facilities in both urban and rural areas.

There is no recent data on contraceptive prevalence rates or the unmet need for family planning services. The maternal mortality rate was reported at zero in 2008, with 100% of births attended by a skilled birth attendant.

Non-communicable diseases are the primary cause of mortality, with circulatory system disorders causing 36% of recorded deaths in 2009.

Annual maximum and minimum temperatures have increased since 1950 in both Rarotonga and Penrhyn at a rate of 0.04°C per decade. Satellite data indicates the sea level has risen near Cook Islands by about 4mm per annum since 1993 – slightly more than the global average of 2.8-3.6mm a year.

Since the 18th century the level of ocean acidification has been slowly increasing in Cook Islands’ territorial waters.

Advancing Gender Justice in the Pacific (AGJP) Programme: UN Women is continuing its advocacy initiatives to promote women’s political participation and providing knowledge products on harmonised human rights reporting and implementation with specific focus on the Convention on the Elimination of All Forms of Discrimination against Women (CEDAW), as well as providing training for women candidates running for elections.

Ending Violence against Women (EVAW) Programme: This programme provides stakeholders with access to virtual knowledge platforms, tools and evidence-based resources in order to better equip them with the knowledge and evidence to advocate for strengthened EVAW legislation, improved policies and services for violence against women survivors. Social media tools will also be used to support community mobilisation that aims to end violence against women and girls, including through campaigns such as the United Nations Secretary General’s UNiTE to EVAW and Say NO-UNiTE.

Increasing Community Resilience through Empowerment of Women to Address Climate Change and Natural Hazards (IREACH) Programme: UN Women supports the incorporation of gender dimensions in strategic documents for disaster risk management and climate change through the provision of knowledge products and tools on the gendered implications of climate change and disasters.