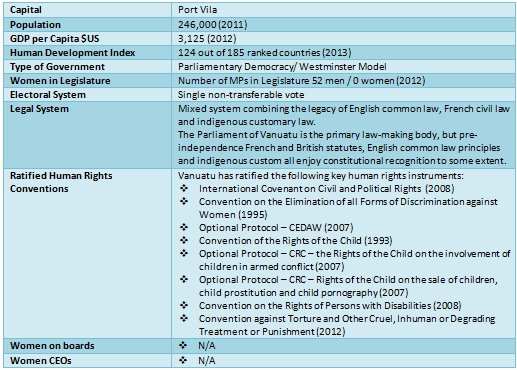 Vanuatu is a Pacific Islands country situated west of Fiji and southeast of the Solomon Islands in the South Pacific Ocean. Vanuatu has emerged as one of the fastest growing economies in the Pacific region, with annual growth averaging around 6% in the years preceding the global crisis[1]. This growth has mainly been driven by foreign investment in tourism and land development. About 70% of the population is located in rural areas and dependent on subsistence or commercial agriculture[1].

Vanuatu has no sexual harassment legislation in place and in non-compliance with the Convention on the Elimination of all forms of Discrimination Against Women (CEDAW), Vanuatu has an unequal minimum age for marriage – 18 years for males and 16 years for females with parental consent.

The use of a victim’s prior sexual conduct to establish sexual consent in rape cases is applied, as are the requirements for corroboration of victims’ testimony and to provide proof of physical resistance in order to establish lack of consent.

Fault-based divorce is practised in Vanuatu and, under the Matrimonial Causes Act, the courts have a duty to promote the reconciliation of couples. Vanuatu family law does not provide for the equal division of matrimonial property in the event of a divorce.

Three in five women (60%) who have ever been in a relationship have experienced either physical or sexual violence (or both) by a husband or intimate partner. More than two in three (68%) experienced emotional violence; more than one in four (28%) was subjected to several forms of control by a husband or partner, more than two in three (69%) experienced at least one form of coercive control, and most of these were living with physical and sexual violence. Most women who are subjected to violence by husbands/partners experience multiple forms of violence.

For the 42% of women who experienced physical violence, the violent incident has been followed by rape. The Port Vila Police Station recorded 475 cases of domestic violence-related incidents and offences in the six-month period of February to July 2007.

About 50% of women believe that a good wife must obey her husband even if she disagrees with him, and 40% believe that the man should be the boss in the marriage. The custom of ‘bride price’ is also harmful to women, with 53% believing that a wife becomes the husband’s property after bride price is paid. More than one in three women (36%) agree that it is alright for a woman or girl to be swapped or exchanged for marriage; and more than half (58%) believe that a woman should not touch food when she is menstruating. Three in five women (60%) agree with at least one justification for a man to beat his wife: more than one in three (34%) believe that violence is justified if a wife is disobedient to her husband; more than one in four (28%) thinks it is all right for him to beat her to discipline her or teach her a lesson; and almost one in three (32%) believe that a man is justified in beating his wife if bride price has been paid.

About 84% of the Vanuatuan population agrees with the statement “sexual abuse is a big problem in Vanuatu” and two-thirds agreed that “children are most often abused by someone they know and trust”. About 40% of young people in Vanuatu have exchanged sex for money or gifts. Approximately 81% of men and 79% of women believe that women sometimes deserve to be beaten, while 91% of men and 84% of women believe that domestic violence is a private matter, and should be handled within the family.

Women account for 36% of total paid members of the formal employment sector, and form 39% of the non-agricultural workforce. Approximately 28% of unpaid subsistence workers are female. When it comes to paid employment, a larger proportion of men are employees (29%) compared to women (23%). More men are self-employed (7%) than women (5%) and more are employers (2%) than women (1%)[2].

Overall, 80% of the women surveyed work to earn money; this rate is even higher for ever-partnered women, and for those living with violence (83%), although women in urban areas are much less likely to earn their own money (58% in Port Vila and 57% in Luganville). Among women who are currently earning an income and living with a man (either married or de facto), over half (53%) earned about the same or more than their husband/partner. Yet less than one in five (18%) has savings in the bank, one in three (31%) has other savings and few women own any major assets on their own.

Men occupy more than 60% of the jobs in both the private and the public (government) sectors. The private sector includes more than 18,500 employees, with 64% being men and 36% women[2]. The government sector is one third the size of the private sector, with around 6,500 employees, 61% of those jobs are held by men and 39% by women[2]. The top occupations that the women of Vanuatu undertake are: subsistence crop farmers; field crop and vegetable growers; subsistence mixed crop and livestock farmer; cleaner; crop farm labourers; early childhood educators and teachers; copra cutter; handicrafts; sales person; market seller[2].

Although women hold a lower percentage of jobs both within the government and the private sector, their level of qualification is generally higher than their male counterparts[2]. Slightly more men in these sectors have a tertiary education, as is the case for the total population, however, the number of women who have completed a senior secondary qualification is greater than men[2].

The leading causes of mortality reported in 2006 were: heart disease; cancer; asthma; stroke; pneumonia; liver disease; neonatal death; diabetes mellitus; septicaemia; and hypertension. As is the trend across the region, non-communicable diseases are an increasing cause for concern.

The majority of health professionals are women (60%), mainly nurses and midwives rather than higher-skilled jobs such as doctors and surgeons[2].

Around 13% of the total population of Vanuatu reported a disability, with the prevalence being slightly higher amongst women (13%) than men (12%)[2].

Annual maximum and minimum temperatures have increased in both Port Vila and Aneityum since 1950. At Bauerfield Airport in Port Vila, maximum temperatures have increased at a rate of 0.17°C per decade, while at Aneityum the rate of increase has been 0.18°C per decade. Satellite data indicate the sea level has risen near Vanuatu by about 6mm per annum since 1993. The global average is 2.8-3.6mm a year.

Women and girls experience natural disasters and the impacts of climate change in ways that are distinct from men and boys. Rising sea levels and changes in air and water temperature have distinct impacts on women’s traditional economic, agricultural and fishing duties.

Natural disasters bring about increased vulnerability of women to violence and deprivation. It is vital that all humanitarian interventions consider the unique needs of women and girls, whether in shelter, housing, nutrition, healthcare, water and sanitation or protection in general. Similarly, it is vital that communities respect and utilise women’s unique skills, and give women a voice in how communities rebuild after disasters.

Temporary and/or permanent displacement as a result of climate change and natural disaster place women in vulnerable economic and social positions as communities struggle to adapt to the changes in their natural environments.

Advancing Gender Justice in the Pacific (AGJP) Programme: UN Women continues building the capacities of its government and civil society partners for Convention on the Elimination of all forms of Discrimination Against Women (CEDAW) implementation and reporting, particularly when it comes to adopting a harmonised human rights reporting approach. Through the AGJP programme UN Women is supporting the government in developing evidence-based access to justice programmes in order to increase access to gender-responsive legal systems for rural, urban and marginalised women. To promote gender responsive budgeting, the AGJP Programme will support the government in conducting reviews of existing planning and budgeting processes, developing gender responsive budgeting guidelines, holding multi-stakeholder forums on transparency and gender-responsive budgeting. UN Women also provides capacity building for women candidates, undertaking advocacy initiatives and supporting diagnostic studies for the recent elections.

Ending Violence against Women (EVAW) Programme: This programme continues to focus on the prevention of and response to violence, exploitation and abuse of women and girls in Vanuatu through its Pacific EVAW Facility Fund. The fund provides financial and technical support to organisations addressing EVAW throughout the country and supports capacity development amongst government and civil society partners in order to provide multi-sectoral and survivor-focused VAW services. The grants facility component enables direct outreach to marginalised groups and VAW survivors with better access and availability of VAW services, information, knowledge on human rights and gender equality.

UN Women provides stakeholders with access to virtual knowledge and evidence to advocate for strengthened EVAW legislation, improved policies and services for violence against women survivors. The EVAW Programme, in collaboration with partner organisations, aims to inform women and girls about the availability of VAW services and to support social transformation through campaigns such as the United Nations Secretary General’s UNiTE to EVAW and Say NO-UNiTE.

Women’s Economic Empowerment (WEE) Programme: UN Women is helping ensure decision-makers have access to national generated and disaggregated data and statistics on women’s economic opportunities through supporting the production of knowledge management products that provide improved and comparable evidence on women’s economic situation in Vanuatu. As part of the WEE Pogramme, UN Women is implementing the Markets for Change Project, which reaches women in the informal economic sector. It is aimed at ensuring marketplaces in rural and urban areas of Vanuatu are safe, inclusive and non-discriminatory environments that promote gender equality and women’s empowerment.

Increasing Community Resilience through Empowerment of Women to Address Climate Change and Natural Hazards (IREACH) Programme: UN Women is supporting the adoption and implementation of gender equality commitments in strategic documents for climate change and disaster risk management through capacity strengthening of stakeholders and the provision of knowledge products and tools on the gendered implications of climate change and disasters.