Protected or put in harm’s way?

This study includes a policy mapping of restrictions on women’s migration in ASEAN, and looks in detail at two particular policy restrictions: the 2014 Myanmar ban on migration to any country for domestic work, and the 2011 Cambodia ban on migration to Malaysia for domestic work. These policy restrictions were chosen because these countries are in the scope of the ILO TRIANGLE in ASEAN programme and the UN Women project ‘Preventing the Exploitation of Women Migrant Workers in ASEAN’, and because they affect domestic work – a major sector of work for migrant women in the region and around the world. It is hoped that other countries in ASEAN will be able to use findings of this report to guide future policy-making.

The two bans in focus here specifically target domestic workers, thus the report has a sectoral focus on domestic work. Data from 2013 indicates that there were 2.23 million migrant domestic workers in the South-East Asia and Pacific subregion, 91 per cent of whom were women. As domestic work is a women-dominated sector, the bans primarily impact and discriminate against women. 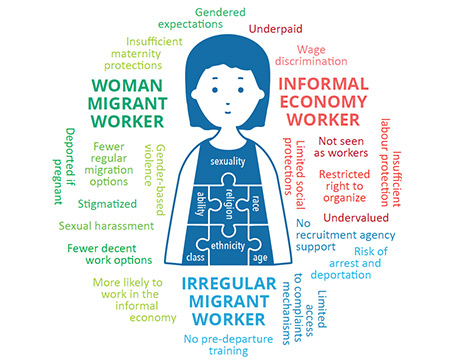