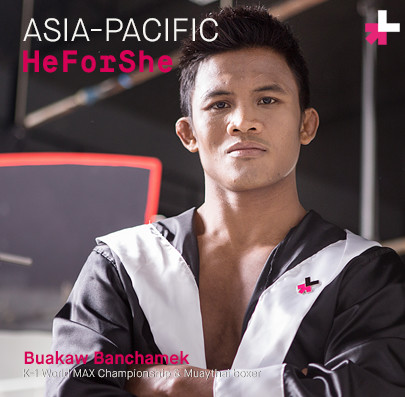 Buakaw Banchamek (Thailand, 1982) also known as White Lotus, is one of the best known Muaythai boxers in Thailand and around the world. He won twice the K-1 World MAX Championship (2004, 2006) and many other tournaments in his country.

Recently, the Muaythai superstar was invited to take part in a UN Women TV spot to raise awareness about the need to end violence and sexual harrassment against women and girls in Asia and the Pacific. As part of this commitment, Buakaw expressed his full support to the HeForShe campaign. The boxer talked to UN Women about gender equality and why sport is a good vehicle to promote it.

In your personal life, how do you promote gender equality?

Respect is a very important part of Muaythai. Respect for one another, for our elders, our families, religions, gender, races and social backgrounds. I have been brought up under this idea, not just in sport but in life. If there is no respect, then there can be no survival and if you want respect, you must show it first.

Why do you think men and women should be treated equally?

Because we are equal. In Thailand we usually respect everybody. This is our spirit also as we are Buddhists. I think for most people, including myself, women are equal to men.

Do you think sports are a good way to promote gender equality?

Regardless in what sport, athletes must be role models. Superstars have millions of fans and this popularity can be used to do good for society. Fans follow their idols so if you give a good example, they will likely adopt these behaviour. At the same time, sport celebrities can point out wrongdoings like violence against women and girls. Even if many athletes may have come from an environment where bad things happen or they grew up in the streets, they can show the younger generations that there is a better world out there.

Why do you stand to stop violence against women and girls?

No one has the right to harass women and girls in any way. I am a Muaythai champion and I have taken challenges in the ring around the world. For me, guys who harass or hurt women are just cowards and I have no respect for them. Therefore it is my duty as a Thai and as a champion, to support a world free of violence against women and girls.

What would you advise thai boys and men to do in order to promote gender equality?

I believe respect is the key. Respect one another regardless of nationality, gender or race. Also I call on men and boys in Thailand to speak up. We cannot close our eyes. If we see violence or harrassment against women, we must report and step in to do the right thing.