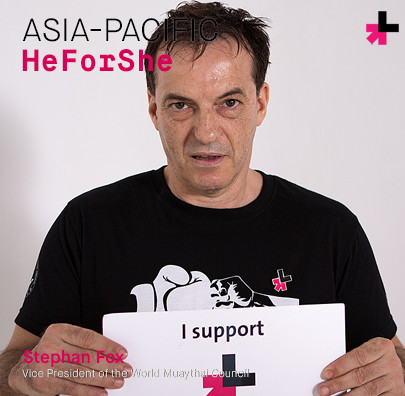 Stephan Fox (Germany) has lived in Thailand for 15 years. He is the Vice President of the World Muaythai Council under patronage of H.M. the King. He is also the General Secretary of the International Federation of Muaythai Amateur and the President of the Alliance of Independent Recognised Members of Sport and Council Member of SportAccord, the umbrella organisation for all (Olympic and non-Olympic) international sports federations as well as organisers of multi-sports games and sport-related international associations. Fox is working closely with UN Women to promote gender equality and raise awareness about the need to end violence against women and girls.

From your position, how do you support the fight against gender-based violence?

Being part of a world-recognised sporting federation automatically brings a number of serious responsibilities and duties. Sport of any kind has a unique power and instil important values. Participation in sport is an opportunity to work for something larger than yourself and in my personal experience I found myself changed along the way. Sport plays an unrivalled role in human society. We have the ability to get attention of individuals regardless of age, gender, geography or culture. Martial arts have deep values and a foundation that is based on respect and honour. Therefore it is my duty to raise awareness and speak up to end violence against women and girls.

Why do you think men and women should be treated equally?

Men and women are equal. I was born in Germany, a country that learned from the past to build a better future. I have a mother who is my role model in so many ways. Giving birth to 6 children, bringing them up at the same time and always being there for me is something that made me ask myself many times “how?”

How can sport promote gender equality?

Athletes can be role models to inspire. We encourage our champions, our coaches, to share our message not just in words but through solid examples. I remember when I won my first trophy as a young boy, my coach told me, “Enjoy the moment of glory and what sport is giving you but remember the real trophy that no one sees is what you give back” Only later I understood the meaning of his wise words.

Why is important to stop violence against women and girls?

For me, beside the hardship, the suffering and the tears that we don’t see, violence is a barrier for development in every way. I’m inspired by the dedication of so many who volunteer their time and effort to help, to make a positive contribution to society in general. We have an opportunity to make a life-changing social contribution. We can be the voices and when so many may not see hope for the future, we can give hope and bring change.