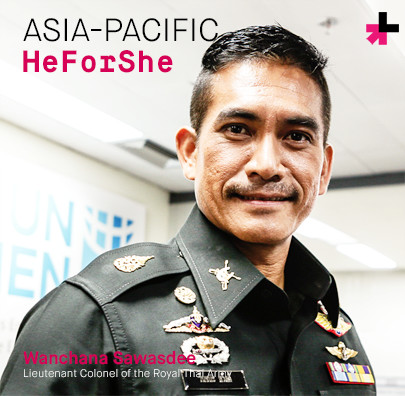 Wanchana Sawasdee is a Lieutenant Colonel of the Royal Thai Army and a popular actor, known for his roles in the epic film series “The Legend of King Naresuan”. Colonel “Bird”, as his fans call him, was one of the first Thai celebrities to show public support to the HeForShe campaign in 2014 and has been advocating for the elimination of violence against women and girls ever since.

You are known as “King Naresuan” and as a soldier in your everyday job. These two roles are perceived as very “manly”. How do you feel, as a man, when you hear that 1 in 3 women and girls will experience violence in her lifetime?

No matter where or when it happens, violence against women is unacceptable. My professional roles are, as you say, are very “manly” roles, and especially my role as a soldier require mental and physical strength, physical fitness and self-discipline, which is associated with masculinity. But as the man I am, professionally and privately, my values are very clear: I respect myself and those around me, and there is nothing “masculine” about hitting women. Strength means to have strong values, and strong men do not hit women.

You have a young son. What kind of life do you envision for him when he grows up?

As a public figure you have become a role model for many people. How do you use your popularity to help others?

Being a public figure allows me to be heard both by the audience and my colleagues when I’m on duty. I am happy to be able to use my public persona to spread the message about positive masculinity and respectful relationships. I therefore support HeForShe and the UN Secretary-General’s UNiTE campaign to end violence against women.