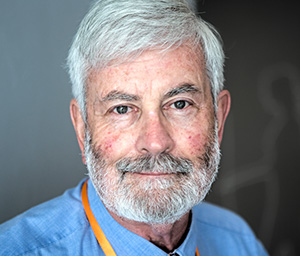 Question: How can we change social norms to prevent violence against women and girls (VAWG)?

“We really need to have probably two ingredients: One is, that the men of today are willing to look at themselves and ask themselves what to believe or think about violence, and ask themselves, ‘do I need to rethink my attitudes’; and we also need to help parents to set a good example, because that is where the next generation will learn most of their attitudes from.”

Question: Could you share with us a success story on social norm change that has contributed to end VAWG?

“I think it’s too early to expect that in Australia, but to show that it can work [to change norms and behavior], there has been a major change in the way that people smoke which is a really important health issue, and a major change in how willing people are to drink before driving a car. These were two really good examples of a law saying ‘this is unacceptable’ [to smoke and to drink and drive], because the law is a society’s way of saying ‘this is bad behavior’ […]. There have been two big changes in [smoking and drunk driving], so it’s possible [to change behaviors], but it’s long-term and hard work.”

Question: What would you suggest to policy-makers to advance ending VAWG?

“Probably the most important thing that policymakers could do is first examine their own attitudes, because if you do not believe in what you are doing, you are not going to do it very effectively. So, if I am in a position where I can make decisions about policies, what do I honestly believe about the rights or wrongs of violence against women or children; and if I don’t like the attitudes that I see around me, what am I willing to do as a policy-maker to change that?”

Question: What do you think is important in order for men to change social norms to prevent VAW?

“I think, speaking for Australian men -because they are really the only group I know- as a group, they do have a strong sense of fairness. They often talk about a fair deal, being fair to each other… so you could broaden it to what’s fair about being violent towards women, and then comes in a very fundamental civil rights issue; because that’s the bottom of it. We all have the right to live in safety, to be respected, emotionally and physically, and that applies to women as well as to men and to children.”

Question: What can individual men do to change social norms on VAW?

“Lots. Individual men can do something; if you see disrespectful behavior, [even if] the behavior in itself might not be too harmful, but if it supports the attitudes that then support harmful violence, you’ve got to be willing to stick your neck out, to take a stance and say, ‘hang on mate’, as we say in Australia, ‘that’s just not on’. Don’t be surprised if you get a defensive reaction, a hostile reaction. You have to decide: do I want to be popular and liked or do I want to do what I know is right?”