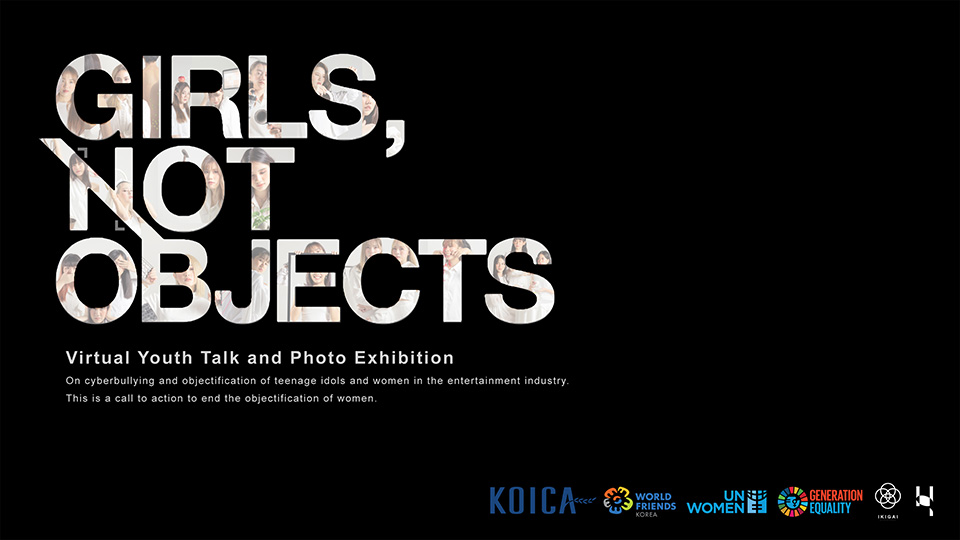 What is Girls, Not Objects?

On International Women’s Day 2020, UN Women Asia and the Pacific has launched an online campaign to discuss the objectification and cyberbullying issues in the entertainment industry in collaboration with IKIGAI and Mu Studio, funded by Korea International Cooperation Agency. Read more

Gender Inequality in the Media and Entertainment Industries

The media and entertainment industries bombard us with images that exacerbate society’s objectification of women and young girls. They portray them as objects whose desirability depends on their physical appearance and sexuality. They create a stereotype of an ideal woman who is “pretty”, thin, voiceless and passive.

These industries show women and girls in stereotypical and limited roles. For example, popular movies usually portray men rather than women in “serious” roles such as attorneys, professors and doctors. They assign women with hypersexualized roles, and have them wear sensual attire or appear nude.

The effects are damaging

Women and girls who compare themselves to these ideals and stereotypes suffer from anxieties about their appearances, feelings of shame, eating disorders, low self-esteem and depression. And other people influenced by the media and entertainment industries’ objectification, harass these women and girls with cyberbullying and other forms of harassment. A 2015 report by the United Nations Broadband Commission said that almost three-quarters of women online had been exposed to some form of cyber violence.

If nothing is done about the problem of objectification, women and young girls will continue to suffer every day.

A global study of female characters in popular films, released in 2014 and partly supported by UN Women, documented deep discrimination and stereotyping of women and girls.

“Twenty years ago, 189 governments adopted the Beijing Platform for Action, the international roadmap for gender equality, which called on media to avoid stereotypical and degrading depictions of women. Two decades on, this study is a wake-up call that shows that the global film industry still has a long way to go. With their powerful influence on shaping the perceptions of large audiences, the media are a key player for the gender equality agenda. With influence comes responsibility. The industry cannot afford to wait another 20 years to make the right decisions.”

*”Girls” here is a reference to female idols. The derogatory term is used in entertainment business and by consumers in this sector. 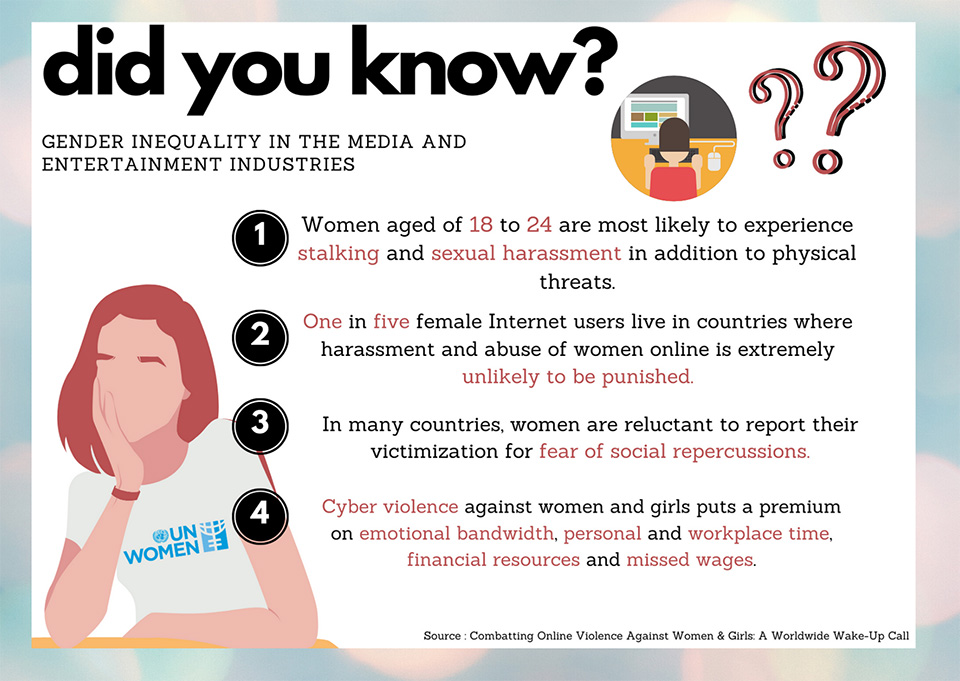 An activist raises awareness. Watch Jane’s video message of the objectification and cyberbullying issues in the Entertainment Industry.

Jane Holloway is a Gender Equality Advocate working as a Social Impact Director of Dragonfly360, a platform that encourages people to promote gender equality in Asia.

Girls Not Objects campaign says youths must take the lead in challenging social norms, objectification, and cyberbullying encouraged by the entertainment industry. With the funding of KOICA (Korea International Cooperation Agency), UN Women creates a virtual space where youth can discuss the issues of objectification and cyberbullying in the entertainment industry.

Girls, Not Objects campaign includes a photo exhibition created by two student groups in Bangkok: IKIGAI, comprising students of the Music and Entertainment Business at Silpakorn University, and Mu Studio, comprising students of Communication Design at Chulalongkorn University. The exhibition aims to raise awareness, both among the general public and within the entertainment industry, of how objectification hurts young female entertainers and singers in Thailand. The exhibition was featured at a gallery in Bangkok last November.

Lessons Learned from the Photo Exhibition

Stand with Girls Not Objects Campaign using the hashtag #StopObjectification against objectification and cyberbullying culture. A social media package to kick start your advocacy is available here.

Spread the word about objectification and cyberbullying, and alert your community that women are faced with all kinds of sexist and disrespectful behaviours in public and private places on a daily basis.

This or That Game: Change the perception on how we should view entertainer
+ Choose between the choice given in the template
+ Once finished, post them on the social media

Photo Message: Share your activist message to your favorite entertainer
+ Fit your favourite idol’s empowered photo with the template
+ Decorate the photo and Post on social media 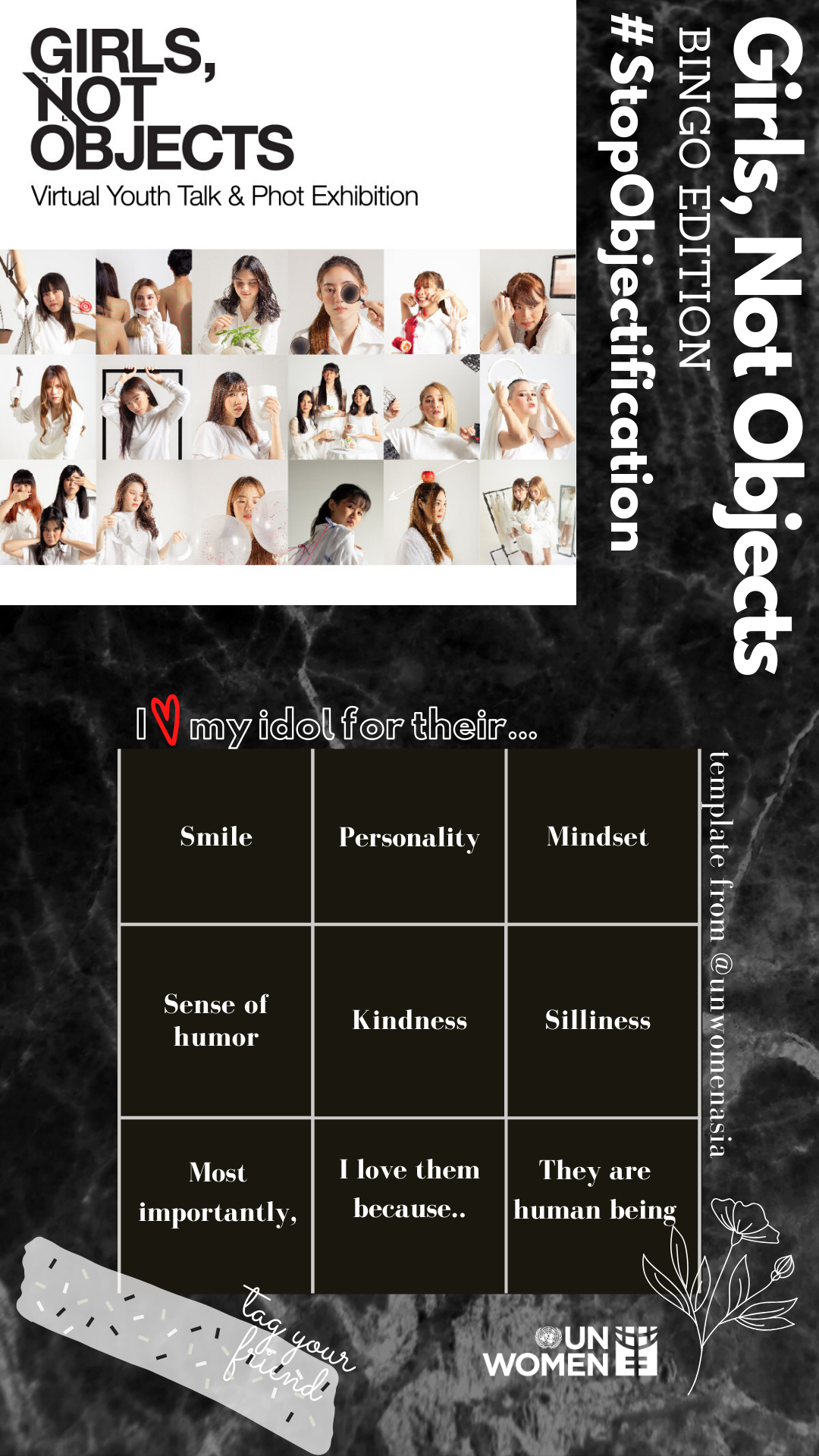 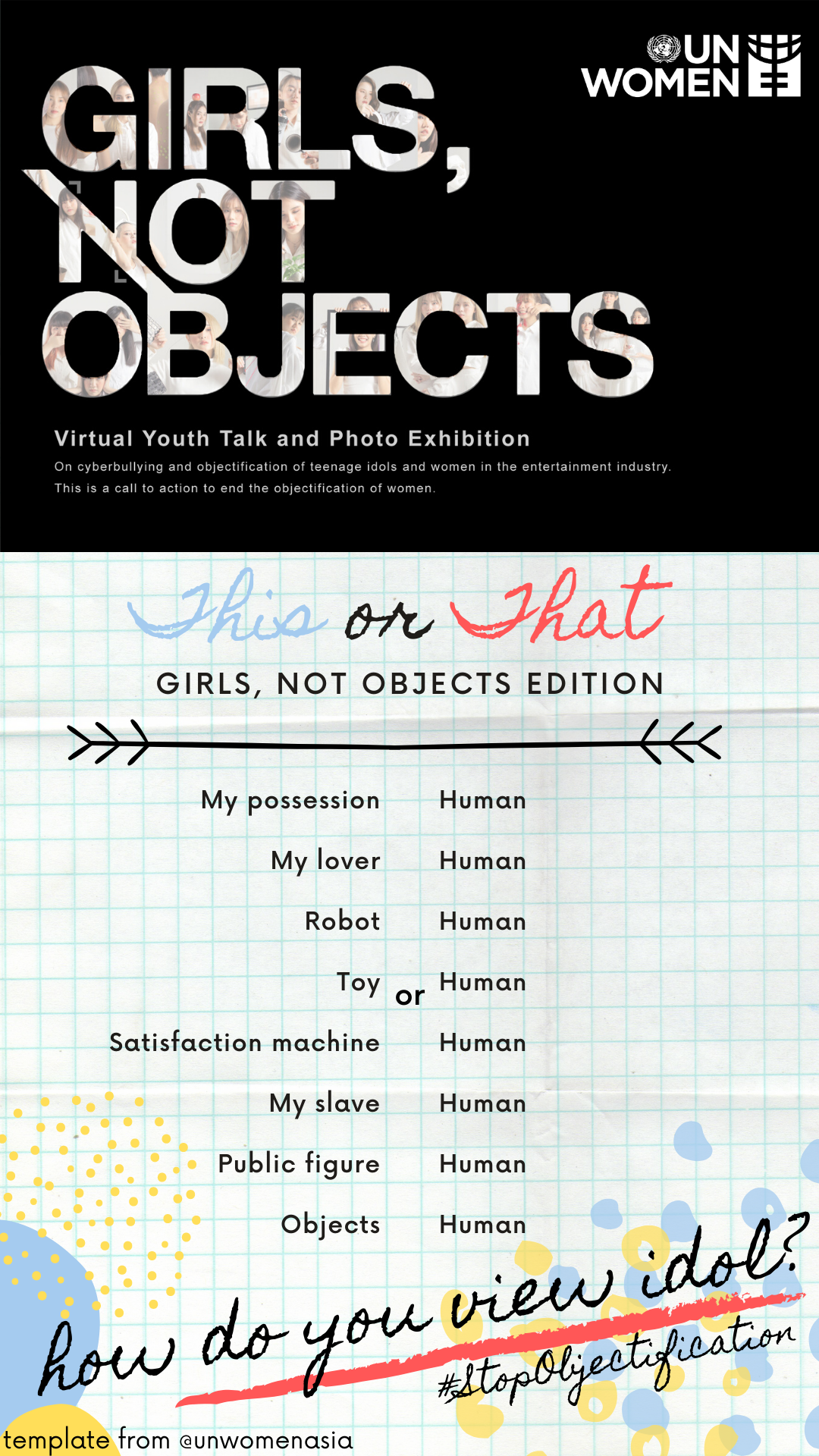 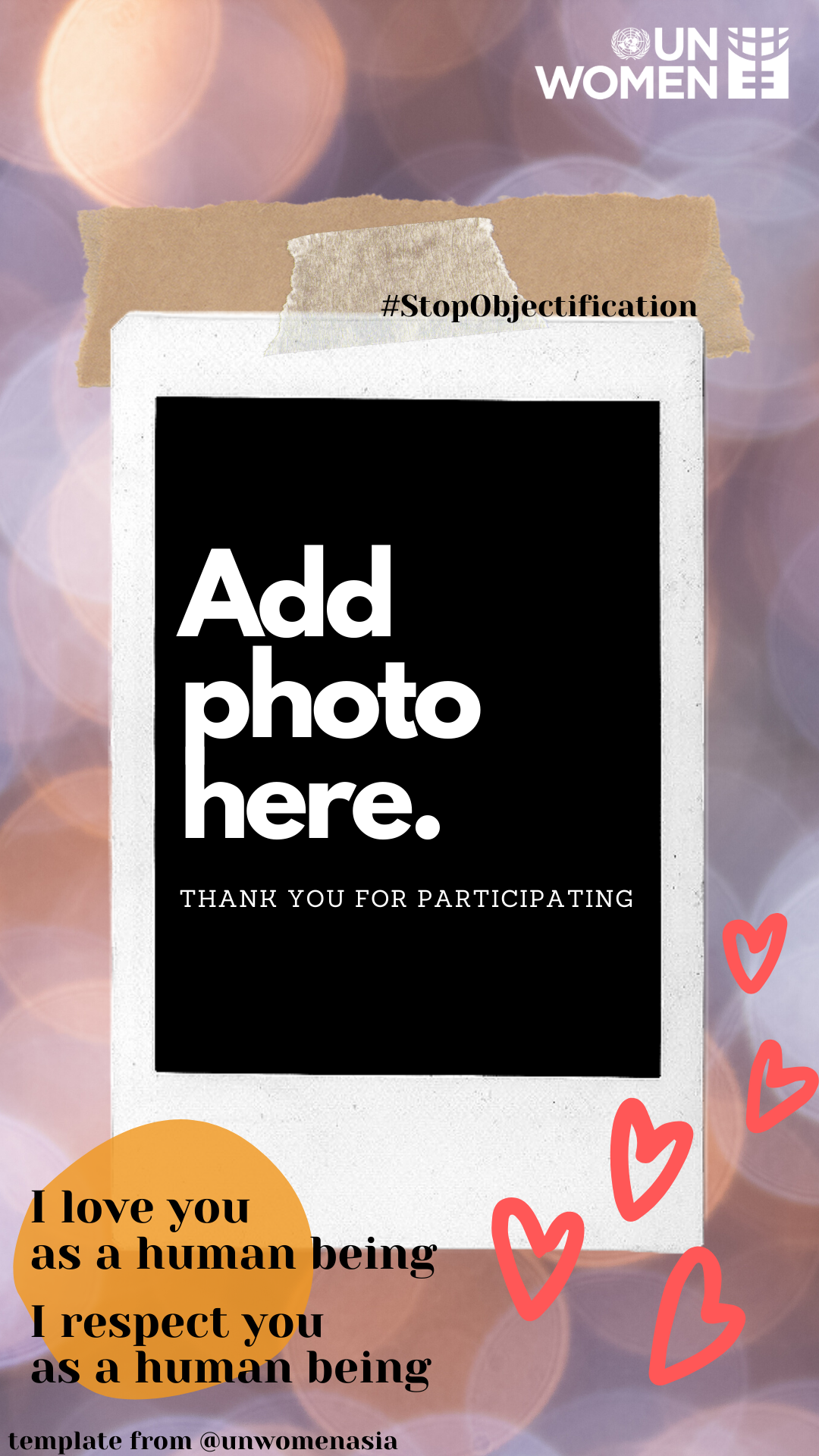 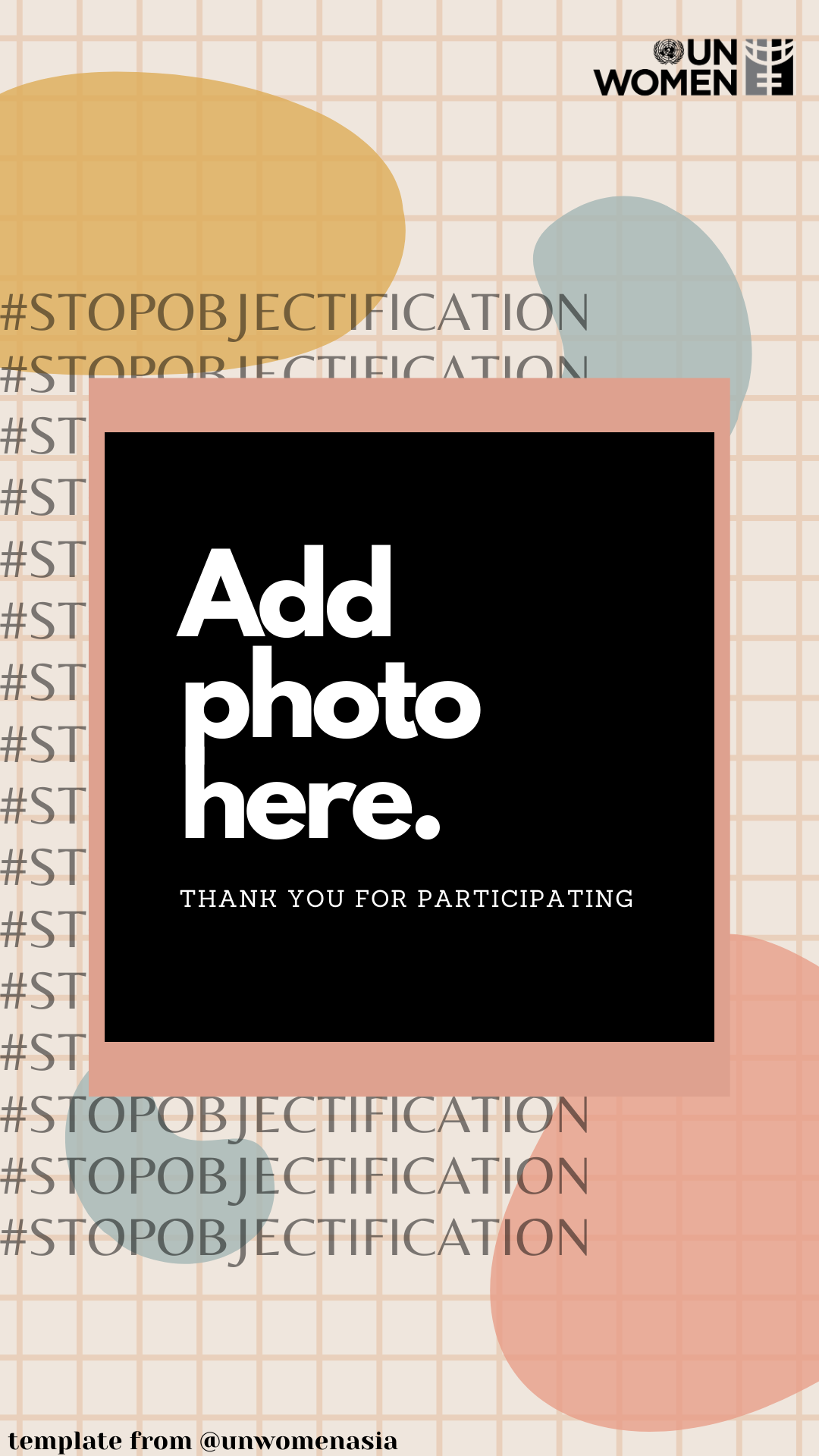 5 areas of work are needed for lasting cultural change to #EndObjectification and #EndSexualHarassment and make equality and non-discrimination the daily norm.
Find out More: https://t.co/GhGVQvghe5#GirlsNotObjects #GenerationEquality pic.twitter.com/SX6ui21inb