The world of work is changing, with significant implications for women. On one hand, technological advances and globalization bring unprecedented opportunities for those who can access them. On the other hand, there is growing informality of labour, income inequality and humanitarian crises.

Against this backdrop, only 50 per cent of working age women are represented in the labour force globally, compared to 76 per cent of men. What’s more, an overwhelming majority of women are in the informal economy, subsidizing care and domestic work, and concentrated in lower-paid, lower-skill occupations with little or no social protection. Achieving gender equality in the world of work is imperative for sustainable development.

The United Nations observance on 8 March will call upon all actors to Step It Up for Gender Equality towards a Planet 50-50 by 2030 by ensuring that the world of work works for all women and re-emphasize women’s role in our economy.

The upcoming sixty-first session of the Commission on the Status of Women (CSW61), from 13 – 24 March, at UN Headquarters will deliberate on “Women’s economic empowerment in the changing world of work” with substantive discussion and recommendations from Asia Pacific region.

Messages from the UN

Women’s rights are human rights. But in these troubled times, as our world becomes more unpredictable and chaotic, the rights of women and girls are being reduced, restricted and reversed. Empowering women and girls is the only way to rel="noopener noreferrer" protect their rights and make sure they can realize their full potential... More

Across the world, too many women and girls spend too many hours on household responsibilities—typically more than double the time spent by men and boys. They look after younger siblings, older family members, deal with illness in the family and manage the house. rel="noopener noreferrer" In many cases this unequal division of labour is at the expense of women’s and girls’ learning, of paid work, sports, or engagement in civic...More

The UN Gender Working Group and Communications group together took the lead on the initiative, Deputy Representative of the Secretary General to Afghanistan, launched the celebration with a speech highlighting the UN’s commitment to gender equality and empowering women in urban and rural Afghanistan. She then officially inaugurated a dedicated women’s space at... More

Today, on International Women’s Day, UN Women launched a one-month campaign branding four trains of the Delhi Metro with messaging on women’s economic empowerment. Two trains each on the Blue Line and Yellow Line will showcase ‘Women in the Changing World of Work: Planet 50-50 by 2030’, drawing attention to the need for equal... More

At the 2017 Asia-Pacific commemoration of International Women’s Day a distinguished panel of experts underscored the need to close the gender pay gap, ensure comprehensive social protection for women workers, recognize, reduce and redistribute unpaid care work and address other key issues related to women’s economic empowerment in order for the region to achieve the Sustainable Development Goals. The panel also emphasised the importance... More

A recipe for equality: sharing a meal and sharing responsibilities for a Planet 50-50

"If we want to make gender equality a reality in Timor-Leste, then men and boys must start to change their way of thinking and how they act,” urged Timor-Leste’s Prime Minister Dr. Rui Maria de Araújo during the launch of the HeforShe Campaign in Timor-Leste, in commemoration of the 2017 International Women’s Day on 10 March 2017. Directing his message to a group of 25 young boys in their school uniforms whom he had invited to the podium... More

Take five: “Women in the organization view themselves as leaders”

I decided to build my career in two male-dominated industries—banking and law. When I started practising law there were partners (both women and men) that I worked for who asked me to make them coffee or pick up their dry cleaning, simply because I was a young woman. It was demoralising and disheartening. However, I also saw many people, again both women and men, who... More

Corporates from Sialkot Reaffirm their Commitment to Empowering Local Women

A group of national corporations and partners engaged in substantive initiatives to enhance economic opportunities and empowerment of local informal women workers in Sialkot, Punjab, on the occasion of International Women’s Day reaffirmed their commitment towards a Planet 50:50 by year 2030 and this year’s Women’s Day theme ‘Women in the Changing World of Work’. The event, organized by Baidarie (a local partner) and... More

Perfectly timed with International Women’s Day, the weeklong HeForShe Arts Week Bangkok took place from 8 to 15 March in Bangkok, Thailand. The event synchronized in other capitals of the World: London, New York, Madrid, Panama City, Paris, Santiago de Chile and Sao Paulo. UN Women Regional Office for Asia and the Pacific brings public awareness through arts and culture on multiple forms of gender inequality women continue to face today. The HeForShe Arts Week Bangkok was organized in the effort and movement to prevent such realities before it starts by communicating with mass public. The performance and artworks were composed with ethnic, age, and gender diversity selected based on core messages and their promotion of gender equality and rights of women and girls... More 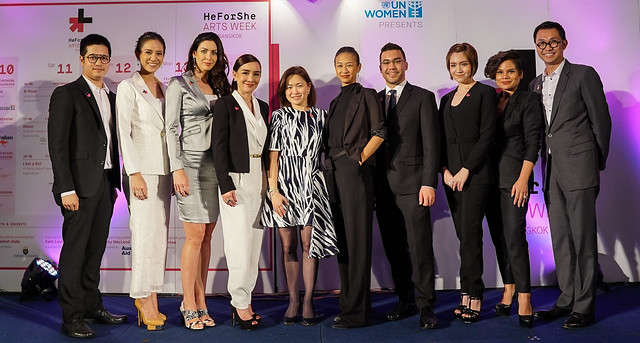 This International #WomensDay, we ask for equal opportunities and women’s rights at work. Are you with us?