Fifteen years ago, in October 2000, the United Nations Security Council adopted the historic resolution 1325 (2000), drawing attention to the differential impact of armed conflict on women, their exclusion from conflict prevention and resolution, peacekeeping and peacebuilding, and the inextricable links between gender equality and international peace and security.

Since its adoption, insecurity and conflict has continued in all parts of the world, and in recent years, it is taking on new and increasingly challenging forms. Cycles of fragility and insecurity have become entrenched in some regions, compounded in some cases by natural disasters and humanitarian crises.

The number of refugees and internally displaced persons is higher than ever before in the UN’s history: at the end of 2014, the number of forcibly placed persons rose to 59.5 million—one of the highest numbers ever recorded [1]. Many of these will remain displaced for 17 years—the average current length of displacement.

All of this is also affected by new and emerging threats, the most prominent of which is the rise of violent extremism and terrorism. Overlaid onto existing conflicts and fragile state contexts, it directly impacts the rights of women and girls: from forced marriage and systematic sexual and gender-based crimes, to restrictions on education, access to healthcare and participation in public life, this escalation in violence is perhaps one of today’s greatest threats to global peace and security, and one that affects women and girls in both unique and disproportionate ways.

It has never been more urgent for the global community to seek and implement effective solutions to today’s crises.

The past 15 years have made clear however that women are a key resource for promoting peace and stability. Research highlighted in the Global Study has established that women’s participation and inclusion makes humanitarian assistance more effective, strengthens the protection efforts of our peacekeepers, contributes to the conclusion and implementation of peace talks and sustainable peace and accelerates economic recovery.

The experience of UN peacekeeping missions shows that uniformed female personnel are critical to gaining trust in communities and shaping peace operations to better respond to their protection needs. The study also compiles growing evidence that demonstrates how peace negotiations influenced by women are much more likely to end in agreement and to endure; in fact the chances of the agreement lasting 15 years goes up by as much as 35 per cent [2]. We also have growing evidence that women are the best placed to detect early warning signs of radicalization in their families and communities, and act to prevent it.

And yet the participation and leadership of women continues to be treated as an add-on or ad hoc measure, hampered by lack of financial commitments, political will, and institutional barriers.

The Global Study on the implementation of resolution 1325 will be launched in Asia-Pacific on 21st January 2016.

Commemorating the anniversary of UNSC resolution 1325 provides an historic opportunity for the international community to focus on the women, peace and security agenda, ensure that the rhetoric around resolution 1325 matches the reality on the ground, and that women’s participation is consistently advocated and implemented as an integral tool for building peaceful and inclusive societies.

Women between rel="noopener noreferrer" war and peace: 15 years of photography 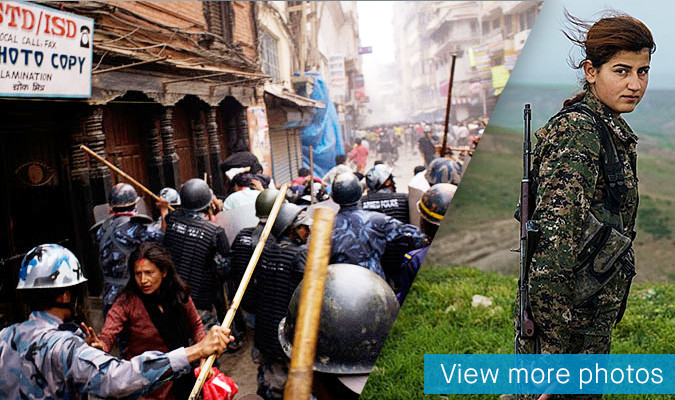 The Story of Resolution 1325 | Women, Peace and Security

When United Nations Security Council resolution 1325 (2000) was passed, it changed history. Never before had world leaders formally recognized the key contributions of women in conflict and post-conflict interventions, including their role in brokering peace, peacekeeping, and peacebuilding. On the 15th anniversary of resolution 1325, we look back at how a broad civil society movement brought this agenda to the council, and, working together with governments and UN agencies, saw the resolution through to adoption.

As the world commemorates 15 years of the ground-breaking UN Security Council resolution 1325, we look at how civil society groups have been using the resolution in their work around the world as an instrument for advocacy, dialogue and advancement of women’s participation in peace and security decision-making. On the occasion of the High-level Review of women, peace and security, it’s time for implementation of resolution 1325 and recognition of women’s key contributions to preventing conflict and securing peace.

Speaking out on gender-based violence in conflict: An interview with Patrick Cammaert

A leading international expert speaks to UN Women about why it is so crucial to involve more women in peacekeeping and why all UN peacekeepers need to be trained to identify and confront sexual and gender-based violence in conflict.

Opening Dialogue and Expanding Partnerships for Equitable Development in Timor-Leste

“Together, in partnership, we can bring this nation forward,” Said Arantes Isac Sarmento, Deputy District Administrator, Manufahi. Surrounded by fertile mountain crops and an envelope of early morning fog, over 100 people of Holarua and Daisua villages in the sub-district rel="noopener noreferrer" of Same came together on 6 June 2014 to voice their perspectives on issues affecting security and the overall well-being of their communities...more

Why I went to the Democratic Republic of Congo

It is now fifteen years since the United Nations Security Council Resolution (UNSCR 1325) on women, peace and security. The resolution reaffirmed the role of women and their equal participation and full involvement in the prevention and resolution of conflicts, rel="noopener noreferrer" peace negotiations, peacekeeping, and in post-conflict reconstruction. The resolution urges all actors to increase the participation of women and incorporate gender perspectives in all United Nations peace and security efforts...more

Mon State, Myanmar: Launch of Publication, “Why Gender Matters in Conflict and Peace: Perspectives from Mon and Kayin States”

Conflict affects women and men differently and puts their lives and properties at different risks. However, women are not just victims of conflict. rel="noopener noreferrer" Mon and Karen women engage within their communities in creative strategies to mitigate the impact of conflict and contribute in many ways to peace. Yet their contributions to peace are generally unrecognised and undocumented, and women are largely absent in political decision-making and the peace process...more

Join the conversation around the High-level Review on women, peace and security using the hashtag #1325at15 and follow @UN_Women on Twitter. A social media package with images and messages in English, Spanish and French is available here.

On 12-13 October, join UN Women, Global Network of Women Peacebuilders and partners for a Tweet-a-thon! Use the hashtag #1325means to join the conversation.