Today, around the world, people are on the move. They are migrating to escape poverty, improve their livelihood and opportunities, or escaping conflict and devastation in their own countries. Women represent almost half of the 244 million migrants and half of the 19.6 million refugees worldwide [1].

The remittances sent by women migrant workers improve the livelihood and health of their families and strengthen economies. In 2015, international migrants sent USD 432.6 billion in remittances to developing countries—nearly three times the amount of Official Development Assistance, which totaled at USD 131.6 billion [2].

Women are often the first responders in a crisis, and whether en route or in camps, in home countries or destination countries, they play a crucial role in caring for, sustaining and rebuilding their communities.

Yet, refugee and migrant women’s needs, priorities and voices are often missing from policies designed to protect and assist them.

Placing women in decision-making roles and including their needs and realities in policies and solutions designed to address global migration and the refugee crisis make them more sustainable and responsive.

Looking for more facts and figures? See our related infographics. 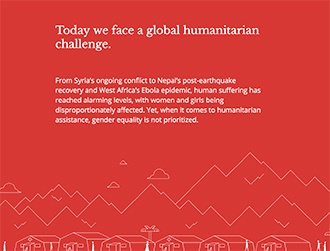 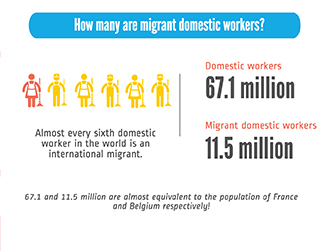 The United Nations Summit for Refugees and Migrants

Addressing the unprecedented large movements of refugees and migrants needs a more humane and coordinated approach that all countries can endorse and implement. On 19 September, on the occasion of the 71st session of the UN General Assembly, Heads of State and Governments will come together at the first-ever high-level summit for refugees and migrants to discuss the key elements of a global compact for safe, regular and orderly migration and a global compact on responsibility-sharing for refugees.

The day-long summit is expected to generate global commitments to address the root causes of large movements of refugees and migrants; to ensure at all stages, the human rights, safety and dignity of refugees and migrants; to provide protection from violence; and to prevent discrimination and xenophobia. World leaders are also expected to discuss a more predictable and equitable way of responding to large movements of refugees through responsibility-sharing and a comprehensive response plan for refugees.

With refugee and migrant women playing a pivotal role around the world to sustain communities and economies, the global commitments must include achieving gender equality, the empowerment of all women and girls and their human rights as underlying principles, address the unique needs of women and girls, include their voices, and be accountable to them.

Snapshots of our work

Towards safe migration and decent work for women in Nepal

Dawa Dolma Tamang migrated from rural Nepal to Abu Dhabi because she wanted to improve her livelihood and support her family. She ended up paying seven times more than what was required to the recruiting agency and was wrongfully denied work on medical grounds. Today, Tamang is working as a mason and will soon start taking the vocational and entrepreneurship skills training provided by a UN Women programme that is advancing women’s economic empowerment in Nepal... more

Research shows that domestic workers in Cambodia need access to and information about physical and mental health. A new technology supported by UN Women empowers them towards a healthier life... more

From where I Stand

This editorial series captures the unique and powerful stories of people around the world, through compelling first-person accounts of their daily sustainable development challenges and how they are bringing about change. Read more»

“The main challenge for women migrant workers is that they don’t know what rights they have....”

Edna Valdez, President of Bannuar Ti La Union, shares her experience as a migrant worker, and her work now for migrant women’s rights in the La Union province of Philippines... more

“I migrated to Abu Dhabi in 2011, looking for a decent life. As soon as I arrived, I realized that it was not the job that I was promised...”

Rubia Aktar from Bangladesh speaks about reintegrating after being a migrant worker and opening her own small tailoring shop in Betila, Manikganj... more

In the Philippines, women migrant workers rebuild lives, advocate for each other

A global programme by UN Women, “Promoting and Protecting Women Migrant Workers’ Labour and Human Rights”, supported by the European Union and piloted in the Philippines, works to build the capacities of migrant women’s organizations and networks to better serve and assist women migrant workers.

In the past two decades, an annual average of 172,000 Filipino women have left the country as migrant workers, in the quest for decent work and adequate income. Many endure abuse and exploitation and need reintegration support upon return. A UN Women programme is strengthening the capacity of migrant women’s organizations and networks to better serve and assist women migrant workers.

These are their stories »

The real-life tale of a domestic worker

Snow White is from Karen State, Myanmar. Her father died when she was 11, leaving her responsible for the care of her mother and younger siblings. Lacking opportunity and education in her hometown, Snow White joined a group of friends hoping to be smuggled into Thailand to find work as domestic workers, setting off a harrowing journey that nearly left her dead. Watch our story to find out how Snow White’s story unfolds.

A year after political violence erupted in Burundi, 295,000 people have fled to neighboring Tanzania and Democratic Republic of Congo. More than half of those fleeing are women and children, who face not only food shortage and poverty, but also higher rates of sexual and domestic violence, and increased chances of early/child marriage. UN Women sets up “Safe Spaces” in refugee camps to offer income opportunities and business training for women, as well as psycho-social counselling and trauma assistance.

Live-in domestic workers in the Asia Pacific region often experience multiple abuses. The innovative Happy Home Campaign has launched a video series to raise awareness of the rights and obligations of domestic workers and their employers. The campaign encourages employers to take the lead in creating happy home environments... more

From where I stand: Khet Kumari Ghimere

When she was 21, Khet Kumari Ghimere migrated to Kuwait as a domestic worker. Overworked, abused and underpaid, she returned to Nepal after two years. Today she works as a security guard at the emergency shelter for migrant women run by the organization, Pourakhi, which is supported by UN Women... more

An estimated 40 – 50 per cent of migrants in Hanoi and Ho Chi Minh City, the two biggest cities in Viet Nam, are women, and they face distinct challenges. More than 10,000 migrant workers have learnt how to access social welfare benefits, legal protection, health care and more through a programme supported by UN Women’s Fund for Gender Equality... more

UN Women’s series Transforming Our World presents succinct thematic documents with the aim of raising awareness on the importance of tackling inequality and on the legal framework that protects the rights of women as well as promote solutions to these issues from all areas of society... more

This publication aims to enhance the existing knowledge and resources on the current situation of the Filipino migrant workers with particular attention to the gender dimensions of migration. It includes accessible sex-disaggregated data and analysis of women migrants’ profiles... more

The Effect of Gender Equality Programming on Humanitarian Outcomes

This Policy Brief takes a broader view of women’s labour migration in ASEAN and considers both the economic and non-economic contributions that they make. Recognising that women labour migrants face gender specific challenges and barriers, this Policy Brief provides recommendations to policy-makers on how to ensure the potential of women migrant workers is maximized to benefit the individual migrant, her family and her community while avoiding simplifying women migrant workers as tools of economic development... more