Gita Rasaili: A woman of courage rebuilds her life in Nepal 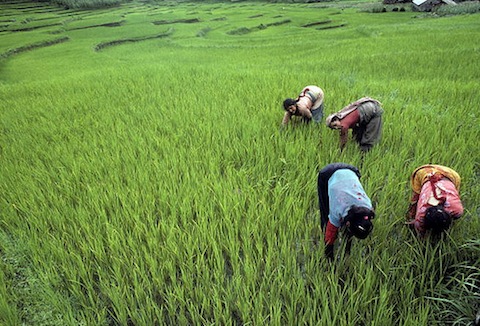 In her young life, Gita Rasaili of Kavre village, Nepal has seen her family torn apart by the ten-year conflict that has plagued her country. Her brother, Arpan Rasaili, was killed in an encounter. Just two years later, members of the Royal Nepalese Army stormed her house at midnight and killed her sister, Rina Rasaili.

Until then, Gita believed that the only real conflict victims were those who had been victimized by the actions of the state. When she was brought together with victims from the Maoist side by the programme, it dawned on her that “the pain they feel is just the same”.

The armed conflict, which shook Gita’s life, has, to date, led to an estimated 13,256 deaths, according to the Informal Sector Service Centre (INSEC), a Nepali human rights group. It has also caused gross human rights violations such as mass killings, disappearances, torture, massive displacement of civilians and rapes of women.

Gita says that the International Center for Transitional Justice’s (ICTJ) Training of Trainers (TOT) programme, which was supported by UNIFEM (now UN Women), helped her rise above party politics and see victims as just victims; regardless of which side harmed them. In Nepal, UN Women does this to promote and strengthen women’s leadership to ensure their equal rights in building nations.

Gita Rasalli learns from others
Following the training, Gita organized her own training programme on transitional justice in Kavre. In her training she shared information about the Interim Relief scheme and the processing of applications. As a result, two conflict victims who had never heard of the relief programme, have now submitted applications for relief.

Gita currently runs her own organization called Rina Arpan Dalit Uthan Manch. The organization is staffed by conflict victims and works for victims as well as for the abolishment of untouchability. The organization has implemented some income generating activities and advocacy programmes. Gita affirms that learning about transitional justice taught her that she does not need to forget the past.

She feels that perpetrators need to be brought to justice and she will continue to fight for this cause.

Related News
11/01/2012
UN Women forms Expert Group on Women & Peace in South Asia
22/12/2021
In the words of Police Lieutenant Colonel Melbeth Mondaya: “Protection and education for girls is especially important because they are the key to women’s empowerment.”
22/12/2021
In the words of Nurrunihar Mohammad: "Women's leadership … is beginning to be recognized"
01/03/2021
Championing a more peaceful, secure and gender-inclusive BARMM
06/09/2013
Lessons on women peacekeepers: Interview with Deputy Inspector General Seema Dhundia
END_OF_DOCUMENT_TOKEN_TO_BE_REPLACED