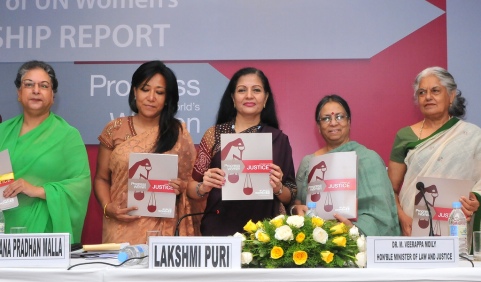 New Delhi - UN Women has released its first flagship report, “Progress of the World’s Women: In Pursuit of Justice,” recognizing progress in India and South Asia, and calling on governments to take action to end the injustices that keep women poorer and less powerful than men.

Touching on issues ranging from gender-based violence to unequal pay and from female participation in government to the cost of seeking justice, the report provides evidence and recommendations on all aspects of women’s access to justice. Containing substantial data and case studies from South Asia, the report touches upon many topical issues such as women’s reservation in legislatures, domestic violence and legal pluralism.

“Almost all countries in South Asia now ensure gender equality in their constitutions. There are, however, areas where women continue to experience injustice, violence and inequality in their home and working lives. For example, domestic violence is recognized as a crime in only four countries of South Asia, leaving millions of women vulnerable to such violence,” said Lakshmi Puri.

The report highlights that employing women on the front line of justice service delivery can help increase women’s access to justice. The presence of women police officers helps increase in reporting of cases of sexual assault. Yet women comprise only 3 percent of the police force and 3 percent of judges in India.

“Without increasing women’s representation in the judiciary, politics and the police force, we cannot move forward and strengthen women’s access to justice in the country,” said Ms. Puri.

The report highlights how laws have made a difference in South Asia. Nepal is one of only two countries in the region that has legislation in place against marital rape. Reservation for women in Nepal’s Constituent Assembly has helped usher in other pro-women legislation. “Laws give us the chance to protect those who are suffering. But we need to change mindsets. Just having a law is not enough,” said Ms. Malla.

Talking about the challenges faced by women’s rights activists in Pakistan, Ms. Hina Jilani said that turning the victim into the accused has stopped in Pakistan. “While the situation has changed to some extent, our judiciary still needs to find gender sensitivity. There is no need for pessimism, those who have the energy to fight can continue to create change,” she said.

Following the press conference, a technical panel discussion was chaired by the ex-Chief Justice of India, Justice J. S. Verma, who pronounced the landmark Vishaka judgment, on the basis of which the Sexual Harassment bill was drafted. “The Vishaka judgment didn’t happen overnight. Mindsets require changes that are accompanied by changes in the law. Interpretation and sensitivity of the law is important,” stressed Justice Verma.

Supporting women’s legal organizations and using quotas to boost the number of women legislators are amongst the ten recommendations highlighted in the report to make justice system work for women.

“There is an urgent need to transform our legal system. We currently see low conviction and high attrition rates of cases pertaining to women’s rights, especially in cases of sexual assault. We need to find innovative solutions to address this, such as one-stop shops,” stressed Ms. Lakshmi Puri, Assistant Secretary General UN Women.

Related News
11/08/2021
Take Five: “Make sure all toxic cycles of family traditions end with you”
03/12/2014
Widows continue to face severe stigma and discrimination
20/12/2021
Joint Statement: UNHCR and UN Women join efforts to protect and uphold the rights of women and girls in Afghanistan
28/06/2021
I am Generation Equality: Saraban Tahura Zaman, bodily autonomy and sexual and reproductive health and rights activist
08/12/2016
Q&A with Abigail Pamei, featured artist for the 2016 UNiTE Song Contest
END_OF_DOCUMENT_TOKEN_TO_BE_REPLACED