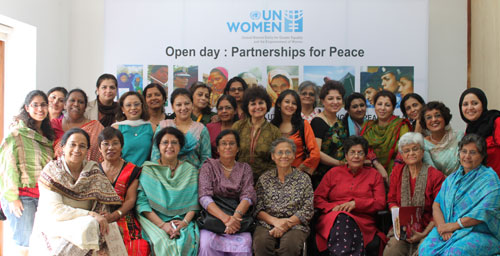 New Delhi - For the first time, women peace activists from South Asia came together to present a joint resolution to the United Nations Secretary-General. In it, they outlined measures to improve the participation of women in peace building and as peacemakers.

The resolution was a result of a two-day open discussion organized by UN Women. It drew on the experiences of activists working in conflict areas in Afghanistan, Bangladesh, India, Maldives, Nepal, Pakistan and Sri Lanka.

On behalf of the Secretary General, the United Nations Resident Coordinator Patrice Coeur Bizot thanked them for the recommendations calling them “a strong message for peace.” 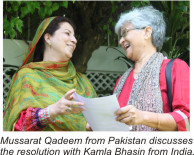 The activists emphasized the importance of using peace processes as an opportunity to transform gender relations and rebuild society based on values of gender equality and non-discrimination.

They shared their own experiences in conflict-affected areas. “We convince mothers of combatants that violence is not sanctified in our religion and that jihad is against humanity. Once convinced, they influence their sons to give up fighting and undergo counseling and skill training. The strategy has been very successful,” remarked Mussarat Qadeem, Head, Paiman Trust.

The work done by women to build peace, however, has not been properly documented in South Asia. “We need to collect and share such experiences to persuade policy makers of the positive role women can play in building peace,” said Kumudini Samuel, Ex-member, Gender Sub-Committee on Peace, Sri Lanka.

Data shows that women’s involvement in peace processes has been very limited. “Over 20 years, only 16 peace agreements exist where gender is mentioned. We have to go beyond mere tokenism,” said Rita Manchanda, Member, South Asian Forum for Human Rights.

Nepal is the only country that has adopted a National Action Plan to improve the participation of women in peace re-construction. “ We still have many challenges to address. The sexual and physical violence faced by women has not been recognized properly. Thousands of women combatants have not come forward, and therefore cannot avail of services,” said Bandana Rana, President, Saathi, who has been involved in Nepal’s National Action Plan.

Women affected by conflict still continue to suffer silently. “There is a culture of shame, and women feel guilty after facing abuse during conflicts. The trauma continues and people live with it. There is no trauma counseling, and we do not even recognize victims. We need to seriously address this situation,” remarked Prof. Amena Mohsin, Dhaka University.

A reform of the security sector was also discussed. The activists stressed that there should be no amnesty for sexual and physical violence against women and other human rights violations.

Patriarchal notions of peace building were also questioned. “Working with men involved in combat and questioning their acts is important. They are using their bodies, and every time they rape a woman, they loose a bit of their humanity,” said Kamla Bhasin, Founder, Jagori.

Despite the challenges, there is optimism about the future. “I see a change in Afghanistan. The way people think is altering. I see enthusiasm amongst the youth, as they are motivated to change existing attitudes. More women are coming forward to include themselves,” declares Huria Samira Hamidi, Country Director, Afghan Women’s Network.