Namgay Peldon was elected as the Gup of Tashiding Gewog in Dagana Dzongkhag. Currently Bhutanese women have 14 percent representation in Parliament and 2 percent at the local government level. Photo Credit: Gurpreet Singh/UN Women

New Delhi - When 28-year-old Namgay Peldon was elected as the Gup of Tashiding Gewog in Bhutan’s Dagana district, she made history of sorts, becoming the first woman Gup or block leader in Bhutan after the nation first went to polls in 2008. Gewogs are official administrative units in Bhutan, each headed by a Gup.

The feat adds another feather in Bhutan’s cap. Three years before her election, the Himalayan kingdom ended more than a century of royal rule and moved towards a democratic system of governance – a peaceful transition that is almost unprecedented in global history.

Gup Namgay Peldon attributes her win to the overwhelming support she received from the people in her village. For over ten years, Gup Peldon worked as a non-formal education instructor, which helped her to establish a close rapport with the villagers. “As an instructor, I interacted very frequently with people. I was always in touch, and helped them to draft applications and letters. I also participated in community gatherings and meetings.  So when I expressed my interest to stand for elections, people were also very supportive of my idea,” she explains. 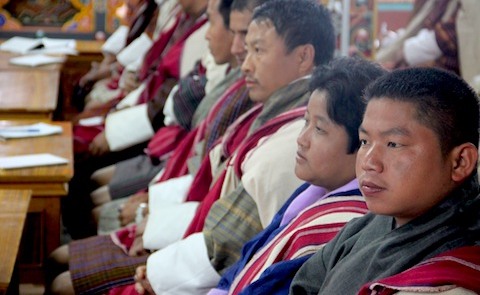 Her victory is an inspiration for all Bhutanese women to venture out and participate in the political and administrative affairs of the state. Research, supported by UN Women, shows that a majority (57 percent) are interested to join politics but are held back by their responsibilities as mothers and housewives.

Being a parent prevents 63 percent of women from joining politics. Men and women believe that women should be in charge of child rearing and housework, and both equally agree that women are passive and weak.

Has Gup Peldon faced similar challenges since she has a 3-year-old child. “While there are many challenges, they are manageable. Of course I have to shoulder certain responsibilities but domestic chores are only for mornings and evenings. During the day I have time for my office. Travelling is a challenge but it is manageable. My parents and husband are very supportive.”

Initially during her campaign there were doubts about how she would balance her personal and professional responsibilities. Those have quickly been assuaged.“We have equal and just opportunities in Bhutan so everyone should come forward. One may win or lose but it is important that one participate. If one comes forward, there is no law that can deny any women,” she says.

The residents of Namgay’s district now appreciate the contribution made by their new leader. “Though she is a woman, I have not seen any difference between her work and the work of a male gup. She is handling all the activities that a male gup would perform. She takes full responsibility for all her actions,’’ says a Gewog Administrative Officer who works with the Gup. Currently, Gup Peldon focuses on getting farm and feeders roads constructed and ensuring water supply and sanitation. 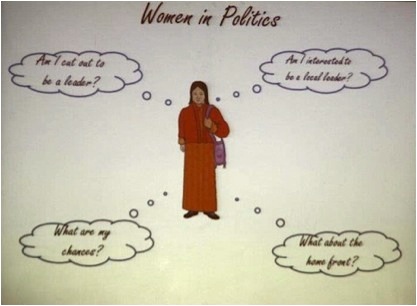 Research supported by UN Women shows that though majority of women are keen to join politics, they are often held back by social perceptions. Photo Credit: UN Women Bhutan

A Network for women leaders

The Royal Government of Bhutan, with support from UN Women and the United Nations, strengthens the skills of leaders like Namgay through much needed training programmes. At a first ever event of its kind in Paro from 16 to 17 March 2012, Ms. Peldon and 72 women including tshogpas (village representatives), mangmi (deputy block leader) and 3 women Members of Parliament came together to create a Women’s Leadership Network.

Speaking of the Network, Ms Peldon greatly appreciated this initiative. “Such kind of forums help us network amongst one another, allow us to gain greater confidence and be more committed to serving our nation. There are still few women leaders in Bhutan today, at the national and local levels, so the establishment of the Bhutan – Network of Elected Women will help elected women leaders and aspiring women leaders to come forward,” she said. 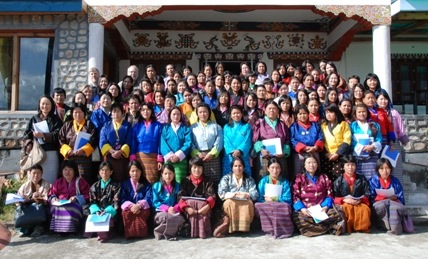 A moment of solidarity: 73 elected women leaders came together to attend the first ever Women in Politics consultation in Paro, Bhutan on 16-17 March 2012. Photo Credit: UNDP Bhutan

For some, it is the first time they met each other. “They discovered that they faced similar issues such as contesting against more popular male candidates and family objections,” says Anne F. Stenhammer, UN Women’s Regional Programme Director for South Asia.

Gup Peldon also participated in a training of trainers supported by UN Women in Colombo, Sri Lanka in March 2012. She is now expected to conduct similar trainings in Bhutan for district level officials and elected leaders at the grassroots.

UN Women is working closely with the Royal Government of Bhutan to strengthen local governance by increasing the capacity of elected women and men. One such way to do so is to empower them with knowledge and finances to exercise their leadership.

“With the funds allocated by UN Women, we would like to send government officials for training on gender equality. We would also like to work with the National Commission for Women and Children to encourage women leadership at the local level,’’ says Karma Galay, Chief Programme Officer, Department of Local Governance, Ministry of Home and Cultural Affairs.

Her win is another step forward in Bhutan’s democratic transition.