Charting a course for Timor-Leste’s National Action Plan on Women, Peace and Security

“We hope that by listening to the experiences of the speakers from other countries as well as the ideas shared by women’s organizations here in Timor-Leste we can make the process of drafting the National Action Plan (NAP) more robust” said Lydia Lopes, Director of the National Directorate for Community Conflict Prevention at Timor-Leste’s Secretary of State for Security (SoSS).  UN Women, in cooperation with SoSS, recently hosted a workshop to launch the process of developing a NAP on Security Council resolution 1325 on Women, Peace and Security. This historical resolution calls on states to ensure that women participate in conflict resolution and peace-building processes from the grassroots up to the national and international levels, that they are better protected from human rights violations, and that women have access to justice and services to eliminate discrimination. 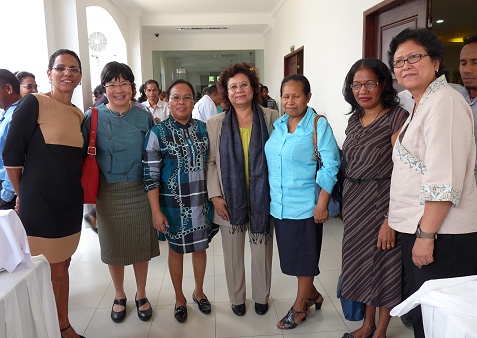 UN Women’s Regional Director, Roberta Clarke, opened the workshop by highlighting that Timor-Leste will become one of only 40 countries in the world that have already adopted a NAP on Women, Peace and Security, and perhaps even more significantly, it is one of only six countries where this has been led by the security sector.  Present at the workshop were advocates from Nepal, the Philippines, and Indonesia who had participated in the drafting and implementation of their country’s NAP on Women, Peace and Security.  These women shared their experiences and insights on the process of developing a NAP over the course of the two-day workshop.

Timor-Leste has, since independence in 2002, made great efforts to address the legacy of conflict and to build lasting peace in the country following centuries of Portuguese colonial rule and decades of Indonesian occupation. Women have played an important role in both the struggle for independence and peace building throughout this time.  The NAP on Women, Peace and Security aims to support continued efforts to include women in all aspects of peace building and securing stability for the future. UN Women has been working closely with SoSS, the Secretary of State for the Promotion of Gender Equality (SEPI) and civil society partners to begin the process of drafting a NAP, the purpose of which is to transform the power disparities that contribute to instability.  Discrimination and violence against women are two symptoms of this persistent instability in Timor-Leste.

Participants in the workshop included representatives from the Ministries of Education, Social Solidarity, Justice, among others, university students, Suco Chiefs (village leaders), community mediators and members of civil society organizations who came together for two days to develop recommendations with the lessons learned from other countries in the region for the content of the NAP. Participants identified the need to carry out an analysis of the current situation of women in Timor-Leste, in terms of their peace and security. They recommended that the preparation and development process should take into account cultural diversity including ethnic, language, religion and geography. They identified the need to establish a National Steering Committee and sub-Steering Committee to lead this process consisting of relevant NGOs/CSOs and government ministries such as Ministry of Social Solidarity, Ministry of Justice, Ministry of Foreign Affairs, Ministry of Education, Ministry of Finance, Secretariat of State for Promotion of Equality, Secretariat of State for Security. Participants also suggested it could be very beneficial to draw on technical experts to guide and lead the process of developing the NAP on Women, Peace and Security. It was widely recognized that this process must be accompanied by the socialization and orientation of UNSCR 1325 at national and district levels, include orientation to the government officials, stakeholders, community leaders, and the community.

Joana Maula de Fonseca Pinto, a community mediator and, one of the few female Suco Chiefs (village leaders) in Timor-Leste, said that she now understands her role in developing the NAP and the importance of women’s participation in peace building. She will “disseminate this to her community and her fellow village council members.” Her colleague, another female village leader from the Baucau district, said “it was good to share the experience of the visitors. Timor-Leste is a new country, so it is good to learn from the experiences of others.”

UN Women will continue to work closely with SoSS, in partnership with SEPI and other key institutions in developing the NAP over the coming year, with continued participation from civil society and women’s organisations.

Related News
22/09/2022
women and peace plan in the Philippines’ Bangsamoro region
27/04/2022
In the words of Sittie Janine M. Gamao: “To overcome my own fears, I think of myself not as babae lang (just a woman) or bata pa (too young) but as a peace officer doing her work.”
23/03/2022
UN Women supporting female former combatants in the Philippines as agents of peace
22/12/2021
In the words of Nurrunihar Mohammad: "Women's leadership … is beginning to be recognized"
22/12/2021
In the words of Police Lieutenant Colonel Melbeth Mondaya: “Protection and education for girls is especially important because they are the key to women’s empowerment.”
END_OF_DOCUMENT_TOKEN_TO_BE_REPLACED