In Myanmar, efforts to bring women to the centre of peacebuilding

For the first time in Myanmar’s history, 120 participants, including senior Government and UN officials, parliamentarians, development partners and civil society, marked the Open Day on Women, Peace and Security on 31 October to commemorate UN Security Council resolution 1325. That resolution and others that have followed recognize that women’s contribution to peace and security is critical and seek to promote women’s participation in all aspects of peace processes. 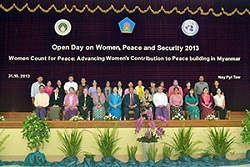 Resolution 1325 and related resolutions set a path-breaking legal and political framework that changes the way we approach conflict, making gender equality and women’s rights in conflict and its aftermath a rights issue and an international peace and security concern,” said Ashok Nigam, Resident Coordinator of the UN in Myanmar.

Organized by the Ministry of Social Welfare, Relief and Resettlement, the Myanmar Women’s Affairs Federation and the United Nations system in Myanmar, the meeting focused on the vulnerabilities and realities faced by women and girls at all stages of the peace process and how they differ from those faced by men and boys. Diverse voices acknowledged that while men are the majority of armed combatants and public decision-makers, women also play supportive roles to the conflict in communities. Women also suffer disproportionate impacts, economically, socially and as a result of sexual and other forms of violence, especially against rural ethnic women and girls.

Meeting participants reiterated that women also bring their unique experience to bear on all aspects of peace processes, such as providing early warning and intelligence about impending conflict, defusing and mediating disputes, building trust and addressing women’s long-term development. They called for the urgent need to include women in decision-making.

“Including women and girls and their priorities in conflict prevention, peacemaking, peacekeeping and peacebuilding promotes women’s rights, enhances gender-responsive development and thus increases the effectiveness of the peace process, shoring up the pillars of lasting peace: economic recovery, social cohesion and political inclusion,” says Jean D’Cunha, Senior Gender Advisor (Focal Point UN Women), Office of the Resident Coordinator of the UN in Myanmar.

According to the participants of the Open Day, a watershed in the peacebuilding process is the expected national ceasefire accord, which seeks to resolve the armed conflict. They concluded that inclusion of women and their priorities in all aspects of the peace process in this accord will advance efforts towards lasting peace and ensure that women’s concerns are addressed in long-term development and sustainable peace. Moving forward, the participants committed to develop and implement a National Action Plan on UN Council Resolution 1325 and advocate for the expected national ceasefire accord to include women’s priorities.

The Open Day meeting in the country comes on the heels of several efforts by the Government and UN Agencies in Myanmar to address women’s priorities in different aspects of the peace process. For instance, in November 2012, UN Women held a peacebuilding and negotiation training course for women in Yangon, aimed at building women's skills and confidence, empowering them to play a greater part in peace negotiations. Two additional courses have since been held, in February and June of 2013, with peer-to-peer mentoring to help women from various ethnic groups influence the ongoing Myanmar peace talks. To date, close to 80 women peace advocates have received such trainings.

The Department of Social Welfare, supported by UNDP, UNFPA, and UN Women, has also provided trainings on CEDAW implementation for parliamentarians, justice sector actors and government officials to respond to the CEDAW Committee’s latest report on Myanmar.