“We must have a code of ethics for working with survivors of gender based violence,” said Antonio Depadua, a journalist with TVTL, the public television station that is accessible in all 13 districts, following a four hour intensive workshop on responsible reporting on violence against women and gender roles, organized by the UN Women communications team. 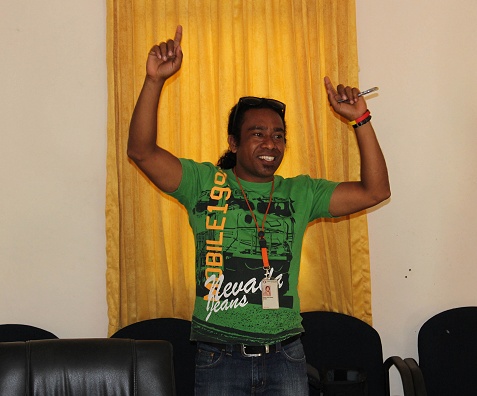 Editors, Directors and journalists from Timor-Leste’s main media outlets including RTTL and TVTL, the two state radio and television channels, Timor Post, the Dili Weekly and Suara Timor Lorosae, as well as representatives from community radio organizations, participated in the first workshop of this kind to be hosted by UN Women. The workshop aimed to promote responsible reporting of cases of domestic violence and gender-based violence in the media as well as to encourage media professionals in Timor-Leste to begin thinking more critically about the role of the media in perpetuating negative gender stereotypes, discrimination against women and inequality.

The UN Women communications team worked with Honorio Dodo Lopes, a trainer from Fokupers, a local NGO that supports survivors of domestic violence and Rosa Garcia, a local journalist responsible for a monthly gender page in the Timor Post newspaper to plan and facilitate a participatory and action-oriented workshop.  Ms. Garcia also participated in a training on Gender Sensitive Reporting funded by UN Women in Bangkok. Some activities included role-plays on the different functions and responsibilities men and women perform inside and outside the family and an analysis of good and bad examples of gender- sensitive reporting. The final activity of the day involved writing a news story of a real case of domestic violence from Timor-Leste in a way that protected the survivor’s identity and did not cause further harm to the survivor by blaming her for the violence she experienced. 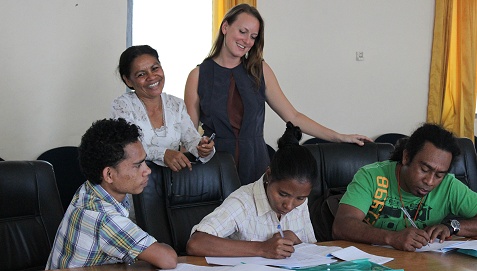 The participants had the opportunity to share their professional experiences of reporting on gender issues and to discuss further steps that could be taken to make the media more sensitive to the issues women face in Timor-Leste. Santina Araujo, Chief Editor at one of the leading newspapers in Timor-Leste, the Timor Post, said: “we learned that we have to change our way of stating districts of survivors of violence when reporting the news.  As an editor, we have to cut out all details of location like village and sub-village, and talk to our journalists about why it is important not to include these details.”

The journalists agreed that there is a real need for more journalist trainings of this kind to increase understanding in the media about violence against women, discrimination, inequality and women’s participation in society and politics.

Rosa Garcia of Timor Post delivers presentation on Sex and Gender in the media and Editors at Editor and Journalist training. Photo credit: UN Women/Betsy Davis

Related News
22/12/2021
In the words of Police Lieutenant Colonel Melbeth Mondaya: “Protection and education for girls is especially important because they are the key to women’s empowerment.”
07/10/2021
From Where I Stand: “Seventeen is too late for children to learn what sexual assault is”
09/06/2021
Addressing the Gender Inequality of Risk and Promoting Community Resilience in Solomon Islands
08/02/2021
From where I stand: "People living with disability in Timor-Leste need respect, not charity”
27/01/2021
UN Women supports efforts to improve LGBTIQ rights in Nepal
END_OF_DOCUMENT_TOKEN_TO_BE_REPLACED