Empowering widows with information, skills and livelihoods in India

UN Women, The Swiss National Committee and the Loomba Foundation have partnered to support widows in India. To mark International Widows’ Day on 23 June, we present an overview of the work that is planned and already underway there.

Vrindavan, June 2013: After 40-year-old Santosh Komodi lost her husband a year ago, life was never the same. A mother of three, Santosh was constantly being harassed by her in-laws and her brother-in-law and denied her share in the family farm. Though she got her share of her husband’s house, her in-laws now want it back. Her elder son works as a labourer, but that income is not enough for the family as she struggles to send two children to school.

Things only started to look up when Savita Sharma informed her about a pension scheme for widows. Today, Santosh is busy getting her papers ready to receive the pension, with assistance from Savita. 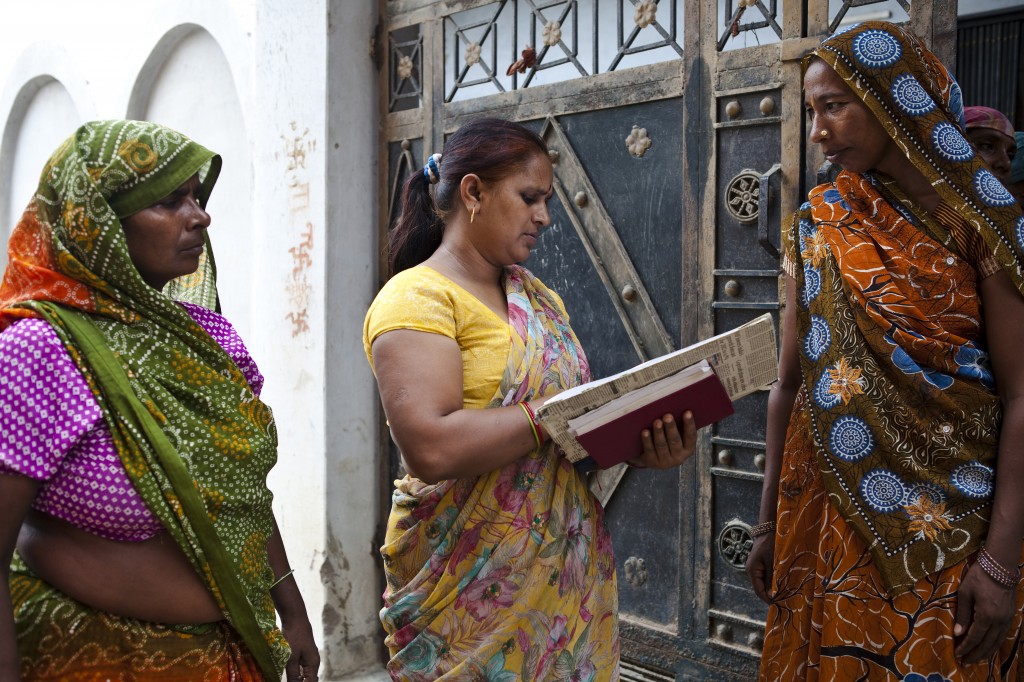 Providing much needed information to widows

Savita Sharma was trained as a human rights defender as part of a UN Women programme with the Guild for Service Foundation, Astha Sansthan, the Swiss National Committee and the Loomba Foundation. Thanks to the programme, that reaches out to 500 widows in Udaipur and Vrindavan districts in northern India, 52 widows are now applying for pensions.

A survey done to assess the situation of widows in Vrindavan by the Guild for Service and UN Women revealed that the widows are extremely poor, living well below the poverty line defined by the World Bank and even the Indian Planning Commission. Although 70 percent of the women had heard of the Destitute Widow Pension Scheme, only a quarter of all widows received a pension.

Savita Sharma is one six human rights defenders who reach out to several widows with critical information and support. In the 87 monthly meetings that have been held so far they have helped widows to demand their rights. “The defenders are part of the overall strategy for the programme that aims to reduce stigma, create awareness about their situation, increase their access to services, and provide them with better livelihoods. The programme has helped to bring coalitions of widows to the fore, so they can demand their rights,” says Sushma Kapoor, Officer-in-Charge, UN Women India.

300 gram panchayat (village council) and 27 block meetings were held with district officials and widows to highlight problems and increase accountability towards widows. Increasing links to Government officials and linking widows to services has been a great achievement of the programme.

To overcome stigma, two widow camps have reached out to more than 200 widows to motivate them to be confident and demand their rights. During the camps, widows apply henna and put bindis (decorative mark on their foreheads) – activities forbidden for widows.

“I learned a lot at the widows’ camp. I know now that we should not be dominated. We have to fight for our rights, be it with my in-laws or the villagers. There is no turning back. I am alone, so I know that I can get together with my sisters, raise our voices and get their support. If I am in trouble, they will support me if I support them. We want to move even further so we can be proud of ourselves,” says 25-year-old Suman, a widow and a mother of two who attended the first camp. At least 1,200 religious leaders, media and community members have been impressed upon to change attitudes.

Widows champions like Duli Bai and Amir Yadav who lead lives on their own terms have been able to reach out to other widows through the programme. Locked up at first, Duli Bai, from Lapiya Village in the western state of Rajasthan, now dresses up and defies social norms. Duli wants to show the world that women can live with dignity. Before she started working with UN Women’s partner, Astha Sansthan, it was rare for her to sit outside her house.

As part of the programme, Duli and Amir Yadav, another widow, visit other widows in the community to encourage them to seek information, services and re-define their own lives. UN Women and Astha Sansthan work with 300 widows like Duli Bai in Udaipur to help them overcome stigma and become agents of change. 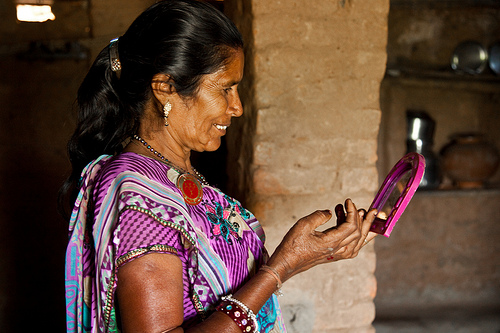 Duli Bai likes to dress in a colourful sari and wear ornaments to show the world that widows can live a life with dignity and respect. A champion of UN Women’s programme, she encourages other widows to stand up for their rights Photo credit: UN Women/Gaganjit Singh

Vocational training enables widows to be financially independent and climb out of poverty. Sita and 15 other widows have given eight public puppetry performances, using puppets they were taught to make. This has not only given them a new vocation, but also helped to tell their painful stories and express their anguish.

“After my husband passed away in an accident, my in-laws started treating me very badly. When I decided to start work at the local school they called me a prostitute,” says 30-year-old Sita. But thanks to the programme, Sita is able to lead a life without fear. 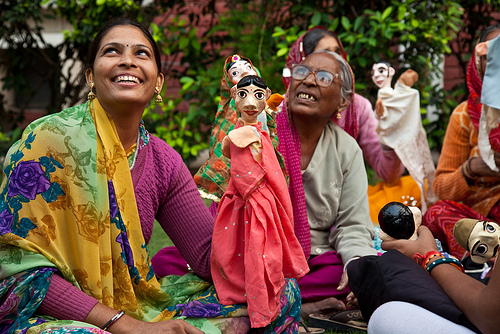 Sita, who at 30 is one of the group’s younger widows, recalled that after her husband died in an accident, her in-laws treated her badly. “When I decided to start work at the local school they called me a prostitute. They said that I was having an affair because I continued to wear a bindi,” she said. While participating in the puppetry training, she encouraged other women in similar situations: “Be strong!” Photo credit: UN Women/Gaganjit Singh

“I really enjoyed the puppetry. We highlighted several issues like child marriage, difficulty in getting ration cards, problematic in-laws, old age and land rights during the puppet show. This is a very easy way of showing problems in society. The audience enjoyed it and want more performances. When all of us work in a group, we motivate each other,” said 53-year-old Ratan Devi of Ajmer.

50-year-old Rajkumari of Ajmer has performed three times in Rajasthan, using her puppet to talk about dowry, domestic violence and the role of the gram panchayat (village council). “I liked it very much – it was something new that we did. This is a very great medium and one can add song and dance to it also and present it differently. The show should also be taken to the schools as it focuses on social issues,” says Rajkumari.

“Before we learnt puppetry we couldn’t express ourselves very well but now we stand behind the curtain and say everything we have to say. The discrimination between son and daughter, sarpanchs who do not work and violence against women are some of the themes that have been taken up by my team,” said 35-year-old Mamta.

During the last two years, 250 widows have also received health tips and learned new vocational skills like stitching and horticulture.