Through self-help groups, grants and gardens, widows, single moms, and survivors of violence are gaining economic independence in rural Timor-Leste.

When you are going through something in your marriage, you think about the kids and how you are going to feed the kids if you don’t have him anymore,” says Rosalina Moniz, an outspoken woman in her 50s from western Timor-Leste. She suffered years of domestic violence, experienced frequent feelings of hopelessness, and felt as if there was no way out. 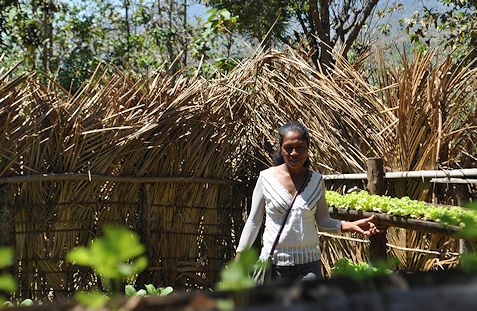 Rosalina Moniz in her self-help group’s garden, one of the few places in the region for certain varieties of vegetables. Photo: UN Women/Aisling Walsh

However, women like Rosalina are now starting their own income-generating activities through self-help groups, supported by UN Women, through funding from the Department for International Development (DFID), the European Union (EU), and Australian Aid (AusAid). The groups aim to develop diverse businesses to provide financial independence to survivors of domestic violence, widows, single mothers and other community members.

Some of these self-help groups have been in existence since 2008, offering micro-grants to start a variety of small businesses, and mentorship through local NGO partners.

Rosalina, who has been living on her own for several years now, used the micro-grant and training from UN Women and its partner organization, the Asia-Pacific Support Collective Timor-Leste (APSC-TL) to start numerous small businesses from brick-making to food conservation. The one she is most proud of, though, is the garden she started with nine other people.

Her garden featured in a UN Women article in September 2012, consisted of planters made of bamboo growing a few herbs and small vegetables. Now, the garden is three metres squared and boasts some rarely encountered vegetables in the outlying areas of Timor-Leste.

“We got cabbage seeds from a nearby community and soon, we will be the only group in Holsa village, part of western Timor-Leste, to grow this,” says Rosalina, smiling. “We still talk about other things we can do as a group to earn money, and the more people join, the more ideas we have.”

For example, the coy fish pond that was dug and filled in now holds nearly full-sized fish that should be big enough to sell in a month.

When you work in agriculture, you have to eat while you are standing up and working, but you always have enough to eat,” said Adriana Araujo Lopes, a member of the Patarata self-help group, which now has the largest garden of all the groups, at 10 hectares. “We are happy to have this food too because getting food from the market was always a problem,” she says, spooning fresh bean stew into bowls for members of the group and their guests. 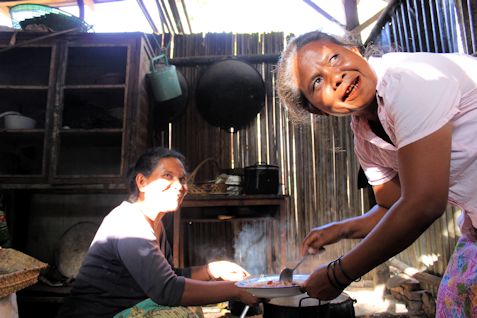 Most self-help groups are made up of survivors of domestic violence, who are also grateful for the passage of the Law against Domestic Violence in 2010. But they had continued difficulty obtaining financial support for themselves and their children in court.

“I always worked; I just didn’t see the money, and buying food was not an option,” Ms. Araujo Lopes said.

With some self-help groups in their third year of operation, food security for these villages seems to be improving. Members continue to ask for more training in different types of agriculture and fish farming, and have been enthusiastically participating in other UN Women-supported training sessions on women in peace building and conflict transformation, on skills such as soap- and candle-making and nurturing each other not only out of goodwill and community spirit, but also out of sense of duty to the collective and their group.

“It is all part of empowering women and men to connect with each other and find new ways of supporting their families,” said Laura Abrantes, one of the founding members of APSC-TL, one of UN Women's partnering organizations that delivers training and mentors self-help groups to continue and innovate by developing new means of economic empowerment.

Veronica Casimira, who partners with UN Women and is a mentor to eight self-help groups, aid, “The groups are advancing. The agriculture groups are finally seeing the harvest of the new seeds and varieties of fruit and vegetables that they planted last year, and we are planning to have our first market day soon.”

Several groups will set up a few stalls at the main market in Maliana to begin selling the fruits of their labour by the end of the year.

Due to its success, the UN Women programme will now be expanded to three more areas in Timor-Leste.