To strengthen its policies and evidence base, UN Women supported the participatory formulation of Cambodia’s 2nd National Action Plan to Prevent and Respond to Violence against Women.

“As a child, I always asked my mother to teach me to cook. But when my father saw me in the kitchen, he got angry with me for doing women´s work. Later in life, I experienced how similar subtle forms of gender bias, such as insensitive media coverage, can affect understandings of women´s role in society and increase their vulnerability to emotional, physical and sexual violence,” says Ratanak Ou, a member of the Network of Male Leaders set up by the UN Secretary-General’s UNiTE to End Violence against Women Campaign. Mr. Ou works with the People’s Health Development, a Cambodian NGO working with men and boys to reduce violence. 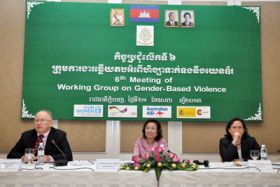 Attendees of the Sixth Meeting of the Working Group on Gender and Gender-Based Violence, during the formulation of the Second National Action Plan on Violence Against Women (NAPVAW) in Cambodia. Photo: UN Women/Inala Fathimath

In June 2014, he took active part in workshops between the Government and civil society as part of the formulation of the country’s Second National Action Plan on Violence Against Women in Cambodia (2nd NAPVAW), effective 2014-2018.

This nine-month-long policy-development process was informed by lessons learned from Cambodia’s first National Action Plan (2009-2012) and international best practices, with support from UN Women and funding from the Australian Government.

“It took time. But democracy takes time. It could have happened faster, but the processes would not have been as democratic or as inclusive and the new partnerships that we have now would not exist,” says Manavy Chim, Executive Director of participating NGO Open Institute. During the consultations, they raised the importance of technology in prevention and were pleased to see their suggestions incorporated in the draft document, which is expected to be approved by a Council of Ministers and formally launched by the end of 2014.

The participatory process yielded a partnership between the health and legal systems and police to ensure a more coordinated response to violence against women.

In the words of Cambodia’s Minister of Women´s Affairs, Dr. Ing Kantha Phavi: “Although the Ministry of Women’s Affairs leads efforts to prevent and respond to violence against women, the reality is that no one ministry, department or organization can reduce violence against women alone.”

Supported by UN Women, the Government of Cambodia established a Technical Working Group on Gender and Gender-Based Violence, consisting of key line ministries, civil society organizations and development partners. This multi-sectorial body initiated the formulation of the 2nd NAPVAW and will guide its implementation.

The 2nd NAPVAW aims to promote policymaking informed by research and voices of survivors so that policy and practice are more responsive to the actual needs of Cambodian women. The evidence was gathered through a comprehensive evaluation of the 1st NAPVAW as well as 13 national-level consultations and 10 provincial-level consultations held around the country over a five-month period, bringing together government line departments and civil society, community leaders, with a focus on reaching marginalized groups and survivors.

The Second Plan focuses on primary prevention and aims to advance Cambodia from awareness-raising to more effective “learning by doing”. It will pair experts directly with government partners to provide guidance on early intervention to prevent violence, accountability and transparency of processes and to make sure that it meets the needs of affected women.

It also seeks to beef-up referrals between services and create minimum standards to build quality. The Ministry of Health, for example, is developing clinical guidelines setting out a package of healthcare for survivors, including emergency contraception, Post-Exposure Prophylaxis (to prevent HIV) and treatment of injuries.

The Action Plan marks a shift from developing basic laws and policies towards strengthening implementation and enforcement of those that exist. Finally, comprehensive data collection will be prioritized to support its monitoring and evaluation.

“Globally we are moving beyond simply responding to violence, to now seeking to prevent it, and Cambodia is at the forefront,” says Ms. Kusuma, “enabled first by the multidisciplinary response of the NAPVAW, grounded in evidence, and still reaching beyond what is known to explore with innovation the imperative what still has not been attained: preventing violence in the first place, before it begins.”

Related News
03/12/2021
“I believe growth in our society can only begin by listening to each other”
02/12/2021
“I believe in the power of storytelling and sharing experiences”
25/11/2021
I want them to gain knowledge about their world, their society and what is right and wrong
10/12/2020
“Solidarity is what we all need, not discrimination against returnee women migrant workers.”
09/12/2020
“As long as there is someone who needs my support, I will be there to provide assistance.”
END_OF_DOCUMENT_TOKEN_TO_BE_REPLACED