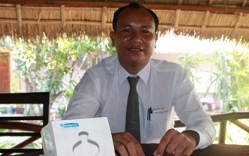 Doeun Doun, General Manager of a restaurant on the outskirts of Phnom Penh

When Doeun Doun became the General Manager of a restaurant on the outskirts of Phnom Penh, morale was low and staff turnover was high. Of a staff of around 70, approximately 10 would leave each month, often women who were not happy with their working conditions. The restaurant’s secluded tables and walkways shaded by greenery make for an attractive setting, but also meant customers thought waitresses were unprotected. Men would regularly verbally harass staff and attempt to touch the women working there—almost every day there were up to three cases of harassment. One of Doun’s first actions as General Manager was to take steps to change this.

He signed the Ministry of Women’s Affairs’ Non Violent Workplace Initiative, which CARE has supported for a number of years. This provided him with materials to display in his restaurant which detail Cambodian laws regarding harassment of women. Doun says he decided to do this because he thought it would be good to inform customers directly of the potential consequences of their actions and to make the restaurant a safe place to work.

As well as posters detailing the laws, Doun found that some of the most useful items he received as part of the initiative were tissue boxes with messages about respecting women. As something that is always placed on tables, he says that these are an easy way of ensuring that customers are aware that harassment of staff will not be tolerated.

Doun says that it took only 3-4 months for customers’ attitudes to change. Although some complained at first, he has not seen a drop in business. Around 60 per cent of his customers are regulars and all of these have changed their behaviour. “Even though they complained, the still come,” Doun says. “I say to them ‘Cambodia is becoming a more developed country and so we need to show women respect’.”

Doun takes a very active role in ensuring the safety of his staff. He personally keeps track of the men who visit the restaurant and ensures that any likely to cause problems have a tissue box placed prominently on their table. In monthly meetings Doun encourages staff to tell him of any problems and advises them to work together to protect themselves—he includes any updates or information he learns from the regular meetings he attends with MOWA and CARE. If any staff complain of the behaviour of customers, he will immediately switch so that a male waiter is serving the table in question. As the manager, he speaks personally with men of whom staff have complained and ensures they understand that insulting his staff is not acceptable.

These changes have had a very positive impact on staff morale. “They are happy to see the restaurant take steps to make customers reduce harassment. Staff now stay working here a long time as they feel safe and know they are supported.” Doun’s turnover figures support this; now that staff feel protected he says that almost none leave.

Harassment of his staff has noticeably reduced—he has encountered only three cases of physical harassment in the last year. Doun believes the prominent messages displayed on tables are effective as they make customers ashamed to act badly.

He says that the business benefits of a confident, motivated staff who are less likely to leave certainly outweigh the small number of complaints he receives. “This business does not need customers who cause problems.”

Care Cambodia is working to scale-up effective participatory community and workplace interventions in the garment, tourism and hospitality industries to promote safer workplaces for 60,000 women workers. The programme was funded by UN Trust Fund to End Violence against Women.