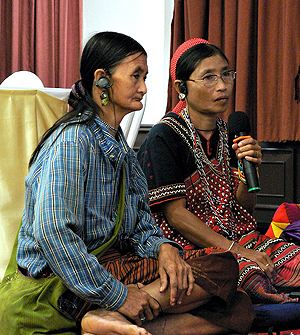 Soi Tonnampet and Kruemebuh Chaya, both members of the Karen tribe from Keng Kra Chan, Thailand, share their experiences of violence and displacement with the group during a story-telling session. Photo: UN Women/Jo Baker

The sound of helicopters still makes Soi Tonnampet shake, years later. It takes her back to the first time she and others from her indigenous community, the Karen, fled from an operation to clear areas of national parkland in Northern Thailand. She recalls that during their first three-day escape through the forest - one of many - an elderly woman died and another woman miscarried.

Although they come from villages far apart, indigenous women's network members from across Southeast Asia found common ground during a recent consultation on violence against indigenous women. Held in Chiang Mai, Thailand, it focused on forms of violence that are worsened or caused by economic development projects.

Organized by the Asia Indigenous Peoples' Pact (AIPP) and supported by UN Women under its Regional Programme on Improving Women's Human Rights in Southeast Asia, the meeting is part of work to connect indigenous women with each other and with rights experts, and provide them with the skills they need to define and respond to pressing issues. As decisions on the sustainable development framework are made and countries - particularly ASEAN members - open up economically, the need to overcome their invisibility and lack of public voice has become increasingly important.

“The impact of the violence on indigenous women that comes with militarization of indigenous territories, with the destruction of our natural resources and with the consequence of displacement, affects them not just as individuals but as a collective - through the social-cultural dimension of their identity and dignity, says Joan Carling, AIPP Secretary General. “If [indigenous women] are not participating in any decision-making where it concerns them, then this issue is not being addressed.

Although often found in areas of natural wealth, indigenous groups make up 5 per cent of the world's population, but 15 per cent of the poorest worldwide, according to the UN's International Fund for Agricultural Development (IFAD). Many contend with extensive damage, marginalization and human rights violations as a result of aggressive development processes.

For women, these harms can take different forms. The influx of non-indigenous workers and security personnel into indigenous areas has led to an increase of sex work, for example, along with sexual harassment and rape. As indigenous livelihoods are altered or destroyed, levels of gender-based violence often rise, and economic, social and cultural harms can affect women differently as their burdens shift or increase. Yet with lower levels of education, and held back by multiple layers of discrimination, indigenous women can struggle to highlight their concerns and lead change.

Nevertheless, women leaders are emerging as effective advocates. The Chiang Mai consultation connected 29 indigenous women from eight countries in Southeast Asia with regional and international human rights experts, women's rights and indigenous peoples' rights advocates - including representatives from the ASEAN Commission on the Promotion and Protection of the Rights of Women and Children, and the UN's Expert Mechanism on the Rights of Indigenous Peoples.

“At this workshop I can hear other country's cases, and how they have overcome [them] so that I learn from them, says Seng Mai, who has been helping indigenous and rural people to respond to development projects in Myanmar, through the Kachin Development Networking Group.

Participants also shared positive progress - whether cases pushed through their criminal justice process, interventions triggered from the UN Human Rights Council, or in a recent case from the Philippines, a military court martial for soldiers suspected of extrajudicial killing. 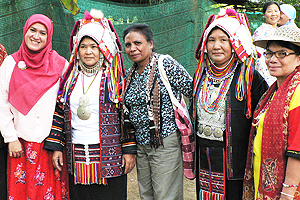 Indigenous women from three areas of Indonesia meet with women from Thailand’s Akha hill tribe, during the participants’ trip to a tribal village in Chiang Mai. Photo: UN Women/Jo Baker

Other network members spoke of meeting with decision-makers on international platforms like the Commission on the Status of Women (CSW), or the United Nations Conference on Sustainable Development in 2012 (Rio+20), arranged with support from UN Women and others. Many spoke of using for their lobbying the women's and collective rights frameworks found in international instruments such as the UN Declaration on the Rights of Indigenous Peoples and the Convention on the Elimination of all forms of Discrimination against Women (CEDAW).

“This is a chance for me to bring this information to my country, my village and the women there, explains Seng Mai. “So in the future when we face problems, we can all address them.

Related News
08/03/2022
New UN Study says Fear, Violence, and Isolation Prevents Myanmar Women from Accessing Income and Healthcare
01/02/2022
In the words of Tarikul Islam
20/12/2021
Joint Statement: UNHCR and UN Women join efforts to protect and uphold the rights of women and girls in Afghanistan
24/11/2021
Take five: “The justice system must be responsive to persons with disabilities.”
11/08/2021
Take Five: “Make sure all toxic cycles of family traditions end with you”
END_OF_DOCUMENT_TOKEN_TO_BE_REPLACED