As part of the activities prepared for the Secretary General’s campaign “UNITE to end Violence Against Women”, the Lao country offices of UN Women and UNFPA together with the National Commission for the Advancement of Women and the National University of Laos hosted an event displaying the creativity of young people through dance and drama performances. 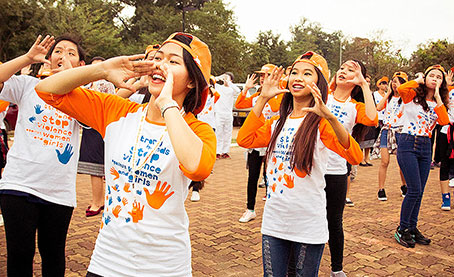 The event, conducted by the youth groups Fanglao Dance Company and Hoppin, aimed to raise awareness about violence against women and girls while encouraging dialogue amongst university students from various faculties on issues such as peer pressure, dating, engaging in sexual activity, date rape, family and society pressures. 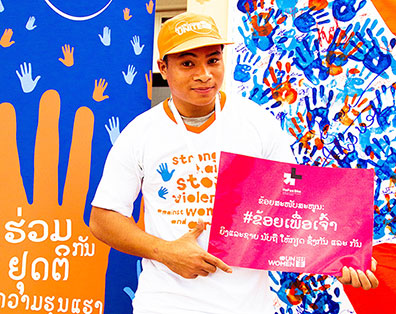 Fanglao’s Director and Choreographer, Kaka (24) came up with the idea of using a flashmob to engage young boys and girls in a creative and fun way highlighting the need for young people to work together to end violence against women and girls. The activity also involved young boys to promote the HeForShe initiative.

Kaka, a well-known dancer in Laos, is a strong supporter of the HeForShe campaign and is using his popularity to spread the message among his peers, not only in the capital Vientiane but also in the southern provinces of Savannakhet and Thakek, where his company is training young people on dance skills.

Youth make up half the population in Laos and have limited outlets for creative expression. Groups such as Fanglao and Hoppin work with young girls and boys to give them a space to express themselves through various types of dance (hip hop, contemporary, break dance) 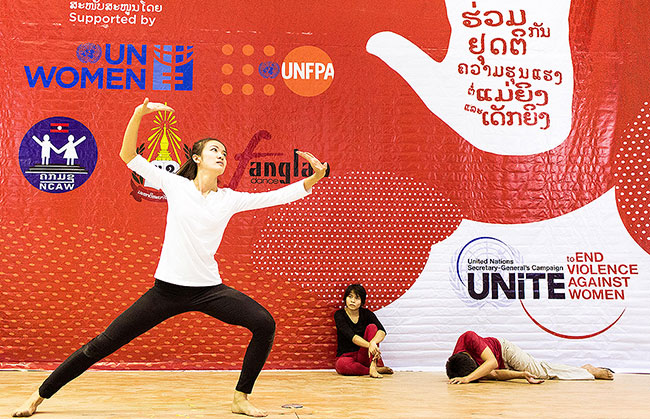 Through learning to dance, youths also build their capacity in teamwork, leadership and management. They learn mutual respect and understanding when resolving conflicts and break down gender stereotypes, as equal participation by both girls and boys in traditionally male dominated spaces such as hip-hop and breakdance is encouraged and supported. Girls have noted the feeling of empowerment and respect they get from their male peers for participating in competitions traditionally reserved for boys.

Photo: Lee Phongsavanh
Related News
11/12/2014
Around the world, women and men of all ages “orange their hoods” to end violence
09/12/2020
“It is more important than ever that women migrant workers know where to get help.”
21/02/2017
Q&A with Sisters in Danger
30/09/2016
Enhancing women and girls’ safety and mobility in public spaces requires strong advocacy that sees women as agents of their own destiny
12/12/2014
The renowned singer and composer Aluna from Laos produced a song to raise awareness about the elimination of violence against women and girls.
END_OF_DOCUMENT_TOKEN_TO_BE_REPLACED