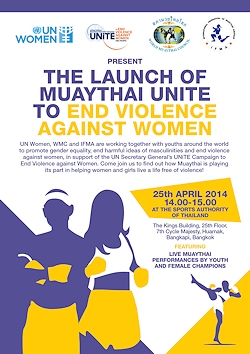 Bangkok, Thailand – UN Women and the world governing bodies of the sport of muaythai have launched a new partnership to prevent violence against women, one of the most pervasive violations of human rights worldwide. The collaboration will focus on engaging and building skills of young people, athletes and trainers within the sport to challenge harmful masculinities and instead foster respectful and non-violent relationships, gender equality and empowerment of women.

Using the growing global popularity and “tough guy” image of muaythai to their advantage, the three partnering organizations - UN Women, World Muaythai Council (WMC) and the International Federation of Muaythai Amateur (IFMA) - will work through national muaythai federations around the world to help raise awareness and end acceptability of violence against women. Apart from equipping young people with better understanding  how they can help knock out harmful social norms that can lead to violence against women, the partnership will also engage male and female muaythai celebrities as champions and work to enhance the internal policies of WMC and IFMA to prevent and respond to such violence.

This new and unique partnership, which is in support of the United Nations Secretary-General’s UNiTE to End Violence against Women Campaign, brings together UN Women’s mandate and expertise on gender equality and ending violence against women with WMC and IFMA’s active involvement with youth around the world to develop character and life skills through muaythai training. Muaythai has recently been awarded the World Spirit of Sport Award for their exceptional contribution to sport and society.

The need to engage young men and boys on this issue has never been clearer. Recent evidence from the Asia-Pacific region has shown that around half of men who admitted to perpetrating rape had done so for the first time as teenagers, often motivated by a sense of sexual entitlement.[1] “To prevent violence against women, we must put an end to the harmful social norms that enables men to assert power and control over women, and this requires engaging young people, especially boys, early in life,” said Roberta Clarke, Regional Director for UN Women Regional Office for Asia and the Pacific. “People engaged in sports can and should play a vital role in raising public awareness and mobilizing men and boys to speak out and stand up to end violence against women,” added Clarke.

Muaythai is more than a martial art, as respect and honor are an integral part of Muaythai. “In recent years, female participation in the sport has tripled. We will continue to increase the participation of women in the sport”, said General Chetta Thanajaro, WMC President. “The ancient art of Muaythai was founded on positive values and traditions and has shown to be very effective in inspiring young peoples to lead dignified and healthy lives based on equality and respect. Fairplay is an important part of Muaythai both in and out of the ring, whether in public or in private life.” added Dr. Sakchye Tapsuwan, IFMA President.

Former 3-time female World Champion, IFMA Vice President and Chairperson of IFMA Female Commission, Sue Latta stated, “Sport of any kind has a unique power. Champions in sport inspire kids to be all they can be. Muaythai champions, regardless whether male or female, may be considered as some of the toughest martial artists in the world, but respect for one another and the ethics of life form the foundation of Muaythai. As a recognised world sport, Muaythai believes that it has a responsibility to make this world a better as well as a fitter place, and this is why we are joining the global fight to end violence against women.”

The first step of the partnership involves the development of training materials for muaythai fighters, trainers and celebrities for addressing violence against women when speaking or demonstrating at clubs and gyms around the world. “The training will focus on understanding how violent ideas of what it means to be a man are harmful to society as well as to oneself”, explained Stephan Fox, General Secretary of IFMA. “There is no grey zone when it comes to violence against women” Mr. Fox added. “Using violence against women is not manly; it’s cowardly and unacceptable at all times.”

The partners are also preparing to develop video clips targeted to youth featuring muaythai celebrities as part of public awareness-raising for online fans of muaythai, to be released later in the year.

The World Muaythai Council (WMC) and International Federation of Muaythai Amateur (IFMA) are the world governing bodies for Professional Muaythai. The inauguration meeting was held in 1995 at the UN building in Bangkok. The International Federation of Muaythai Amateur (IFMA) was set up in 1992 to achieve the highest possible sporting recognition for Muaythai on the amateur level. Muaythai is now recognised by SportAccord, International World Games Association and Olympic Council Asia. There are 128 National Federations recognised by the highest sporting authority and all National Olympic Committees work together under the same rules, regulations, mission and vision. Muaythai is focussed on the development of our youth as tomorrow’s leaders in sport and more importantly as citizens of the world. Values of respect and honor, the protection of Muaythai as a cultural art form and sport, integrity and ethics, fairplay both in and out of the ring and gender equality are all important keystones of Muaythai. Their common mandate is to support the expansion of Muaythai worldwide, which involves supporting youth and athletes to learn the skills of Muaythai as a cultural art form and well as a form of self-defence and a popular ring-sport. More information can be found at www.wmcmuaythai.org and www.ifmamuaythai.org

UN Women is the UN organization dedicated to gender equality and the empowerment of women. A global champion for women and girls, UN Women was established to accelerate progress on meeting their needs worldwide. Launched in 2008, the United Nations Secretary-General’s UNiTE to End Violence against Women Campaign is a UN System-wide initiative which aims to raise public awareness and increase political will and resources for preventing and ending all forms of violence against women and girls in all parts of the world. UNiTE’s global vision is a world free from violence against all women and girls and the campaign works with governments, civil society, women’s organizations, men, young people, the private sector, the media and the entire UN system to join forces in addressing this global pandemic. Through advocacy initiatives at the global, regional and national levels, the UNiTE campaign is working to mobilize individuals and communities, with a strong focus on actively engaging with men and boys and young people. More information can be found at asiapacific.unwomen.org  and endviolence.un.org

Violence against women and girls is a grave violation of human rights. It takes many forms and occurs in many places – domestic violence in the home; sexual abuse of girls in schools; sexual harassment at work and in public spaces abuse during pregnancy; and rape in cities as well as other forms. Its impact ranges from immediate to long-term multiple physical, sexual and mental consequences for women and girls, including death. It negatively affects women’s general well-being and prevents women from fully participating in society. Violence not only has negative consequences for women but also their families, the community and the country at large. It has tremendous costs, from greater health care and legal expenses and losses in productivity, impacting national budgets and overall development. To find more information, please visit endviolence.un.org

[1] “Why do some men use violence against women and how can we prevent it”, Partners4Prevention is a UNDP, UNFPA, UN Women and UNV regional joint programme for gender-based violence prevention in Asia and the Pacific. Please see www.Partners4prevention.org