Women champion their liberation from manual scavenging in India 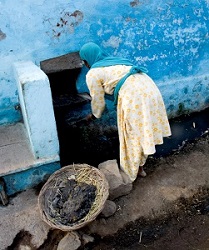 Manual scavengers represent arguably one of the most inhumane ‘jobs’ that a person can have. Ms. Chotti Bai from Chittorgarh district of Rajasthan used to be one of the hundreds of thousands of manual scavengers in India. Their daily task it is to remove human waste from unsanitary and ‘dry toilets’ (without flushing system). Ms. Bai explains, “Before marriage, I had a choice whether or not to engage in the practice of manual scavenging. After my marriage, at my in-laws’ place, I just had to do it. I had no choice. I used to get a very small amount of money and one roti every day. That was our only payment. If I did not do my job well, I would get threatened by the so-called ‘upper’ caste people in the village, and would also be scolded by my own in-laws.”

The Indian caste system has been in existence for centuries and is woven into the social fabric. Based on systematized inequality and social stratification, a person’s caste determines their rank in society and dictates many things, from where a person can work to who they can marry. For both women and men, their social, economic and political relations within their community depend on their caste status, which is inherited at birth. The caste system has left the vast majority of people from the ‘Untouchable’—the lowest of the castes, also called Dalit group—deprived of their social, economic and political rights. Manual scavengers belong to this caste and have the lowest status and are seen and treated as the ‘Untouchables among the Untouchables’.

“Manual scavenging in India is a caste-based and hereditary practice reserved to Dalit. It also happens to be predominantly a ‘woman’s job’. Indeed, data suggests that women represent 95 per cent of scavengers who remove the human and animal excreta and waste using their hands and simple tools (such as thin boards and baskets) which they carry on their head,” says Dr Rebecca Reichmann Tavares, Representative, UN Women’s Office for India, Bhutan, Maldives and Sri Lanka. 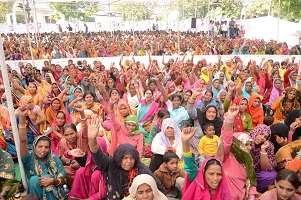 Apart from the degrading, exploitative and unsanitary work, manual scavengers are also discriminated against by the stigma that comes from their caste-based work. “I was a farmer, but after marriage, I was forced to do manual scavenging for a living. I had very severe skin diseases from this inhumane practice. We were not allowed to go near the hand-pump or any other water source. We were not allowed to approach the ‘chakki’ (flour-grinder) in the village as we were ‘untouchables’. We had agricultural land, but were forced to leave it fallow. It was a very undignified and inhuman existence,” says Ms. Badam Bai from Neemuch district in the eastern state of Madhya Pradesh.

The Manual Scavengers are often forcibly hidden from the public sphere and have no voice and dignity. “Their most basic rights are shunned, whether labour rights or basic human rights. In addition, since they have no other job opportunities—as a result of discrimination based on their caste—they are forced to remain scavengers,” says Mr. Ashif from the NGO Jan Sahas Development Society. This organization—a grantee of UN Women’s Fund for Gender Equality—has been working for over a decade to eradicate manual scavenging in four states of India. 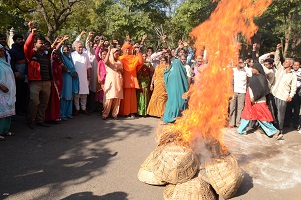 Since January 2013, Jan Sahas Development Society has been working to liberate, rehabilitate and empower 10,000 women manual scavengers in 15 districts of India. “Through this partnership Jan Sahas and UN Women seek to improve the lives of thousands of women manual scavengers. We will help them access better and more humane economic opportunities; ensuring that they are able to earn an income that is four times higher than what they earned as scavengers. We will create spaces for them to speak out and voice their concerns and advocate for their rights, including better access to legal aid,” explains Caroline Horekens, Regional Programme Specialist for UN Women’s Fund for Gender Equality.

Jan Sahas is also raising awareness at the local and national level, with both duty-bearers and rights holders, on this inhumane work and the policies and laws that exist and make this illegal. The “Prohibition of Employment as Manual Scavengers and Their Rehabilitation Bill” is now an Act and needs to be implemented strongly.1

Rehabilitation for the women goes beyond just finding them another job or teaching them new skills. Changing their daily reality involves changing the attitudes of thousands, if not millions of people for whom the women do manual scavenging, as well as the women themselves.

“We need to instill a sense of leadership in the scavengers themselves who need to be empowered to realize that they can and should have better economic opportunities and dignified choices on how to lead their lives. We need to sensitize duty bearers to enforce and implement the laws and policies that exist and make this practice illegal,” adds Asif.

Today Chotti and Badam are ‘liberated’ from scavenging. Not only do they have new and better jobs, in safer conditions, with better pay and in more formal sectors, they have also become leaders who mobilize and organize other women in the community. More women like Chotti and Badam need to come out and stake their claim to ensuring their most basic economic rights are met.

1 The Prohibition of Employment as Manual Scavengers and their Rehabilitation Act 2013 or M.S. Act 2013

The 1993 law was enacted under the State List and questions arose whether the Parliament has the jurisdiction to enact the The Prohibition of Employment as Manual Scavengers and their Rehabilitation Bill, 2012 Bill. It was argued that the objective of the Bill is to protect weaker sections of society, including Scheduled Castes and Scheduled Tribes from the practice of manual scavenging, i.e. it is primarily about preventing employment in hazardous occupations. In view of this interpretation, the Parliament was empowered to legislate on the issue through Entry 23 (employment and unemployment) and Entry 24 (welfare of labour including condition of work) of the Concurrent List.

The 2011 Draft obliges previous employers to extend monthly pension to manual scavengers in recognition of the long years of service rendered to society under adverse conditions; and assist in securing alternative employment for such pensioned elderly manual scavengers who are unwilling to be idle. It further recommends rehabilitation (unconnected with sanitation work) as service providers and cooks for anganwadis and mid-day meal schemes or as railway staff assisting the elderly, the disabled or children.

In addition to training them as caretakers of public parks/gardens, plumbers or electrical repair workers, the 2011 Draft directs the Ministry of Railways to set aside a quota to absorb ex-scavengers as railway catering staff. It also duty binds the Central and State governments to provide proper housing with adequate sanitation, road infrastructure and, most importantly, quality schools up to Class XII for the children of all Scheduled Caste communities from which manual scavengers are drawn. A remarkably detailed rehabilitation plan in the 2011 Draft is motivated by a three-fold realization: (1) to restore the dignity of life to the entire community of sanitation workers; (2) to secure, through educational opportunities, better vocations for future generations traditionally vulnerable to being recruited as manual scavengers; and (3) to clearly spell out the tasks of every Ministry, PSU, and private sector organization in order to make them enforceable.

The Government has passed the new legislation in September 2013 and issued Government notification for the same. In December 2013, the Government has also formulated Rules-2013 called as "The Prohibition of Employment as Manual Scavengers and their Rehabilitation Rules 2013" or "M.S. Rules 2013". The details about Act and Rules are available on the website of Ministry of Social Justice and Empowerment, GOI.

Further, the hearing on 27th March, 2014 was held on Manual Scavenging of writ petition number 583 of 2003, and supreme Court has issued final orders and case is disposed of with various directions to the Government.