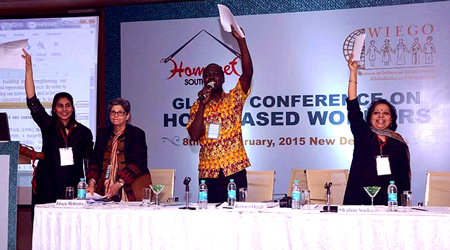 From 8 to 11 February 2015, over 100 home-based worker leaders and supporters from 24 countries gathered in Delhi, India, for the Global Conference on Home-based Workers: Building Solidarity and the HomeNet South Asia General Body Meeting. Pushing forward the social justice agenda, the conference adopted the Delhi Declaration of Home-based Workers that seeks to advance human rights, decent work and social protection for home-based workers. Roberta Clarke, UN Women Regional Director for Asia Pacific shared her reflections of the event.

The four-day conference was attended by members of 60 networks, associations and trade unions of home-based workers, together with NGOs and researchers, from Africa, Latin America, Eastern Europe, South East Asia and South Asia. The participants took part in workshops, field visits and a celebration recognizing the contributions of home-based workers.

UN Women’s engagement with this agenda dates back to 2000 when the UNIFEM India Sub-regional Office and Women in Informal Employment: Globalizing and Organizing (WIEGO) co-hosted a conference. The 2000 conference resulted in the Kathmandu Declaration on Women Workers in the Informal Sector, a demand for strengthened state accountability for work conditions of home-based workers and for ensuring their access to markets and economic resources. The Kathmandu Declaration was historic and came after the Beijing Declaration and Platform for Action which also spoke to low wages, little or no protection of labour standards, poor working conditions, and the lack of job security and social security for women in the informal sectors, particularly home-based workers.

At this global 2015 conference, the themes of social protection for women in the informal sector, decent work, and participation in public decision making were reiterated in the Delhi Declaration. Urgent priorities raised in accordance with the ILO’s Home Work Convention No. 177 include recognition of rights to freedom of association and collective bargaining of home-based workers. 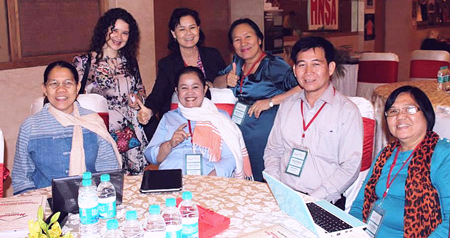 Photo: WIEGO and HomeNet South Asia
Across the globe, there are about 100 million home-based workers, with about 50 million of them living in South Asia. According to WIEGO, the majority of home-based workers in most countries are women, 70% in Brazil, 75% in Pakistan and 88% in Ghana. Gender norms regarding women’s role and mobility, the hiring practices of companies and the lack of other employment opportunities are some of the push factors forcing many women to take up work from home.

In her remarks, Roberta Clark called for more research and collection of sex-disaggregated data in order to enable policy makers to positively respond to the needs and aspirations of home-based workers, as well as to protect their rights as workers.

The underlying theme of this conference was the imperative of moving out of poverty though decent work, participating in development and linking home-based work with global markets and value chains. “Our determination is needed to ensure that those who work from home are equally protected and have full access to the resources needed to secure self-development and equitable participation in economic growth”, Roberta Clark stressed.

Key participants agreed to work in partnership to urge countries to ratify and implement ILO Convention 177 on Home Work through dialogues with relevant ministries, mobilization and strengthening of home-based workers organizations and commemorating Home-based Workers Day on 20 October.

The global conference on home-based workers was organized by WIEGO and HomeNet South Asia.

This story also published on EmpowerWomen.org.
Related News
20/09/2022
Bridge Gender Gap Engender the Workplaces at Top Priority
19/09/2022
The gender pay gap, hard truths and actions needed
15/06/2022
LinkedIn and UN Women join hands to create employment opportunities for women in APAC
30/11/2021
Knowledge Hub on Labour Migration in South Asia Launched
27/09/2021
From where I stand: “I want young Dalit women to be part of a society where they can voice their opinions and… dream of a life more than just basic”
END_OF_DOCUMENT_TOKEN_TO_BE_REPLACED