New Delhi - In a first of its kind initiative, UN Women in India in partnership with Centre for United Nations Peacekeeping (CUNPK) has developed a special technical course for female military officers which is being piloted in New Delhi, India.

Women’s participation in the security sector has been recognized as a critical component of UN peacekeeping mission success, both in the UN normative frameworks on peacekeeping and women, peace and security, as well as by commanders on the ground themselves.

However, a very low number of female military personnel are currently deployed in peacekeeping missions and military operations in general. On average, only 3 per cent of military personnel in UN missions are women, and these are mostly employed as support staff, rather than in protection tasks. Even for specialized positions, such as UN Military Experts in missions, there are currently only 65 women out of a total of 1,757 (or 3.6 per cent). 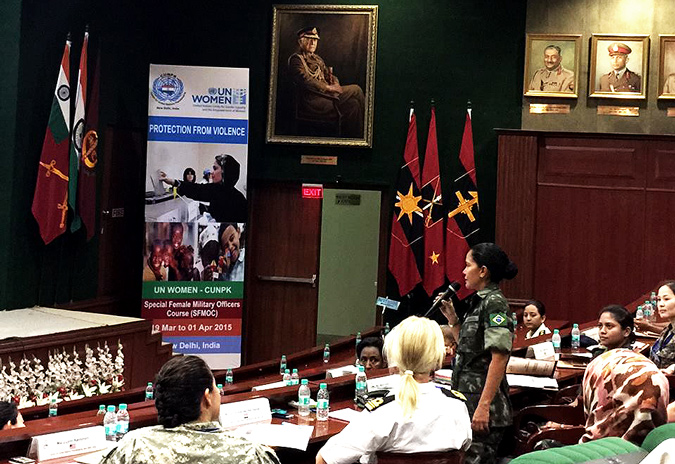 There is currently no dedicated course to help member states train female military officers in tasks such as community outreach and interaction with survivors of violence against women in post-armed conflict UN mission areas, hence the significance of the training. The pilot course is also timely, following numerous reports on Conflict Related Sexual Violence (CRSV) and the lack of uniformed women specialized in reaching out to CRSV survivors.

This first pilot course at CUNPK will involve 40 female military officers – holding the rank of Captain, Major or Lt. Col – from major TCCs around the world. UN Women is working with the participating countries to enable the female participants to be cleared by their governments for deployment to a UN Peacekeeping Mission after completion of the course. Close coordination with UN–DPKO Force Generation Service (FGS) and the Office of the Military Affairs (OMA) is being maintained to streamline this effort.

India is the third largest TCC to UN missions. UN Women in India has been partnering with the Indian National Peacekeeping Training Centre to facilitate courses on sexual violence in armed conflict during the past four years.

Rineeta Naik is a Communications Analyst for UN Women India Multi Country Office located in New Delhi. She can be cantacted via email: [ Click to reveal ]
Related News
30/11/2021
Knowledge Hub on Labour Migration in South Asia Launched
01/11/2021
I am Generation Equality: Jeevika Shiv, lawyer, social worker, youth and gender equality activist
07/10/2021
From Where I Stand: “Seventeen is too late for children to learn what sexual assault is”
30/09/2021
From where I stand: “My message to every parent: Get your girls educated.”
29/09/2021
Coverage: Transforming lives through education and opportunities for women in India
END_OF_DOCUMENT_TOKEN_TO_BE_REPLACED