Vientiane, Laos - UN Women Regional Director for Asia and the Pacific, Roberta Clarke, visited Lao PDR to join different advocacy events on occasion of the 16 Days of Activism against Gender-Based Violence (GBV). Her visit coincided with the official visit of Helen Clark, Chair of the United Nations Development Group and Administrator of UNDP.

On November 26, UN Women Regional Director attended a celebration event at the Lao National Stadium to mark International Day for the Elimination of Violence Against Women together with the Ministry of Education and Sports (MoES) and the Australian Department of Foreign Affairs and Trade (DFAT). The activity saw the participation of Mr. Lytou Bouapao, Deputy Minister of MoES, Mr John Williams, Ambassador of Australia to Laos as well as government, diplomatic officials and young people.

"We must all have zero tolerance for violence against women and girls and work in partnership and with urgency to accelerate the achievement of gender equality and women's rights. This is a moral imperative for people everywhere” said Clarke in her opening remarks. “As called for by the UN Secretary-General's UNITE Campaign, we need solidarity and actions of all - governments, civil society organizations, the private sector, the media and, especially, men and boys. As we start the 16 Days of Activism, we must also pledge our commitment for achieving a Planet 50-50 by 2030" she added.

The following day, Clarke participated in the 12th High-level Roundtable meeting, a national forum gathering over 300 delegates from the Government and development actors including the UN, to discuss partnerships and cooperation for the effective implementation of the 8th Lao National Socio-Economic Development Plan.

After the meeting, the Regional Director hosted a luncheon for some of the most prominent women leaders in the country to discuss trends, opportunities, and challenges for women in decision-making positions. Participants in this event included high-level officials from the National Assembly, Ministry of Natural Resources and Environment, Ministry of Finance, Lao National Commission for the Advancement of Women (LaoNCAW), Lao Women’s Union, Lao Disabled Women’s Development Center, Scaling Up Nutrition Civil Society Alliance, Lao National Chamber of Commerce and ANZ Bank.

Lao Students say no to Violence

On November 27, UN Women Regional Director joined 1,500 students to kick off the celebration of the 16 Days of Activism Against Gender-Based Violence at the Vientiane Secondary School, where MoES and UN Women are implementing a pilot project with support from the Australian Government.

Under the programme, a training manual on gender equality and prevention of violence against women and girls was tested with 60 students and 10 teachers of Vientiane Secondary School. After the initial training, the participants reported better understanding of the issues and subsequent behavioral changes. Realizing the positive effect of the initiative, MoES expressed interest to expand the pilot project to a nation-wide programme.

The Regional Director had the chance to interact with the students and teachers who participated in the project and discussed with them about their experience and the way forward for this project. 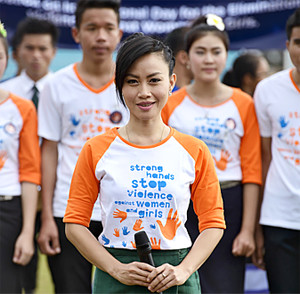 During the event, Lao pop star Aluna launched the video of her song “Every Woman” produced last year in collaboration with youths from the Arts Education College in Vientiane to raise awareness on the need to stop violence against women and girls.

Before leaving the country, Ms. Clarke joined an additional commemorative event to raise awareness on ending violence against women and girls. The activity, hosted by Care International and LaoNCAW, with support from Australian Aid and the Gender Development Association, served as a space to showcase the work on social mobilization implemented by UN Women and its partners as well as to disseminate the preliminary results of a joint project consisting on a community tool for the prevention of violence against women and girls.

Related News
09/12/2020
“It is more important than ever that women migrant workers know where to get help.”
16/04/2019
Empowering the invisible mine victims in Lao PDR
27/11/2015
Gender Equality is A ‘Silver Bullet’ for Development: Helen Clark
24/11/2015
UN Women Regional Director for Asia-Pacific joins campaign against gender-based violence in Lao PDR
27/11/2014
Laotian Youth supports #HeForShe
END_OF_DOCUMENT_TOKEN_TO_BE_REPLACED