Empowering the invisible mine victims in Lao PDR

As I play tag with Minta, a beaming four-year-old, it’s easy to forget the tragic circumstances that brought this bright-eyed girl and her mother to a UN Women-led skills training for women victims of unexploded ordnance (UXO) in Xieng Khouang, a town in the north-east of Lao PDR. Tired from running, Minta settles into a chair, giggling, and I can’t resist reaching for my camera to capture her radiant face, pink from the exercise and the nippy Xieng Khouang air. 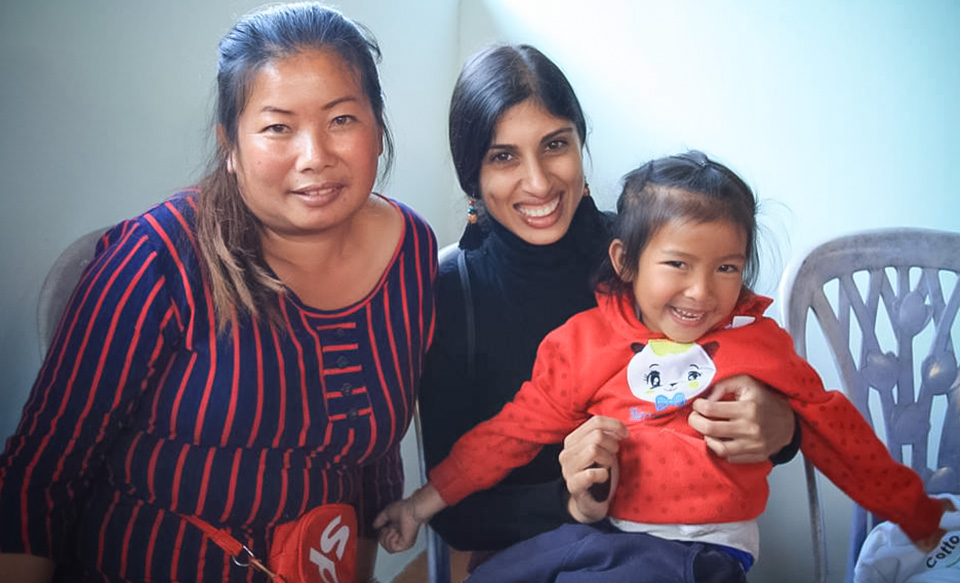 Her face lights up even more when I show her the photograph and she promptly reaches for her mother’s cellphone to show me some pictures of her own. I’m given fleeting glimpses of her life in rural Xieng Khouang, as we flip past images of Minta perched on her father’s broad shoulders against the backdrop of lush paddy fields and grazing buffaloes.

She freezes at a photograph of her father in a hospital bed. His arms are so covered with gashes and wounds from a recent UXO explosion that I imagine he might never be able to use them to hoist his little girl onto his shoulders again, let alone plough the family’s rice fields or tend to the vegetables they farm and sell at the local market.

Minta seems to understand this and her smile fades. Mine also falters, as I contemplate the future of this beautiful girl and her mother who, although uninjured, are nonetheless victims of the same UXO that robbed a father and husband of the ability to use his arms.

Minta’s mother, 34-year-old Vangpa, now has to work twice as hard to provide for the family while caring for her injured husband full-time and doing the housework. Often, women in Vangpa’s situation stop sending their daughters to school, due to limited resources and the need for more hands to help at home.

The UXO legacy in Lao PDR can be traced to the second Indochina war between 1964-73, when the country was bombed continuously every 8 minutes, 24 hours a day, for almost 10 years. Although the war is long over, 30 per cent of the bombs failed to explode. They remain scattered across the country, ready to be set off by a farmer digging fields or an unsuspecting child mistaking a small brassy cluster bomb for a ball.

Casualties have dropped 85 per cent in recent years, due to the Lao Government’s comprehensive mine-risk education and victim assistance programmes, established with various partners. However, only recently has gender been given due attention by such programmes. 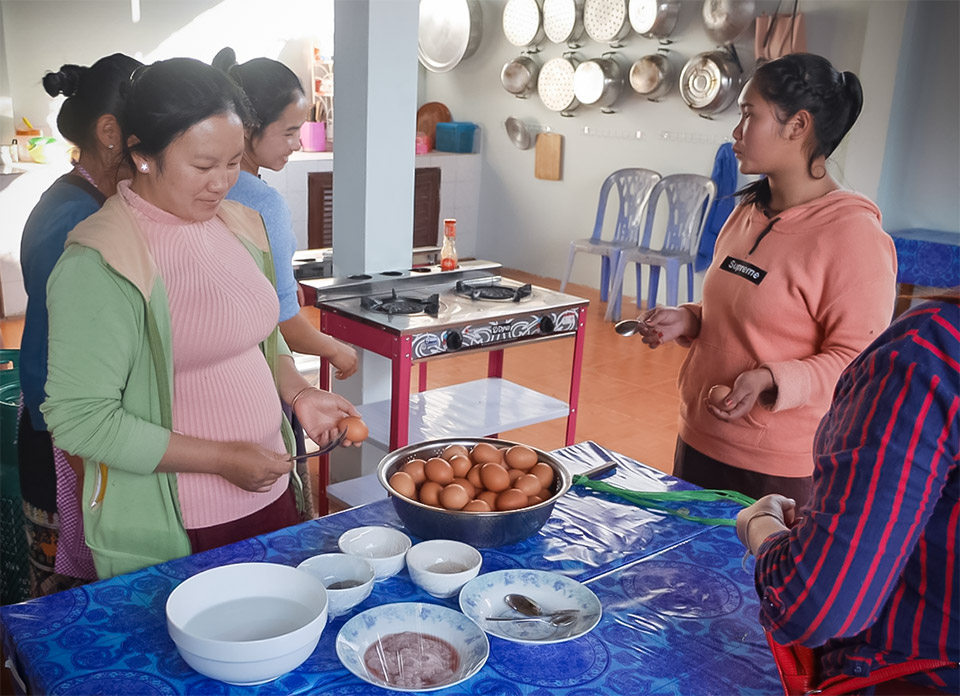 A UN Women skills-training programme, supported by the Government of Canada, is focusing on the often invisible victims of Lao’s UXOs – the women. Photo: UN Women/Keshia D’silva

Given traditional gender roles that encourage men and boys to be active outside the home and in the fields, the majority of UXO victims are male. Most victim assistance programmes have focused on helping direct victims literally and figuratively get back on their feet.

But the indirect victims – wives, mothers and sisters –are rarely helped.

Even with assistance, maimed men and boys are often unable to lead an active life after an UXO accident, requiring the women and girls of the family to become the breadwinners.

For women socialized as housewives, with little education and skills, transitioning to the role of provider is not easy. It can lead already poor families into further marginalization.

Yet, I’ve seen that the right assistance can keep Minta’s smile bright and enable her mother to face the difficult twist that fate has dealt them with optimism. 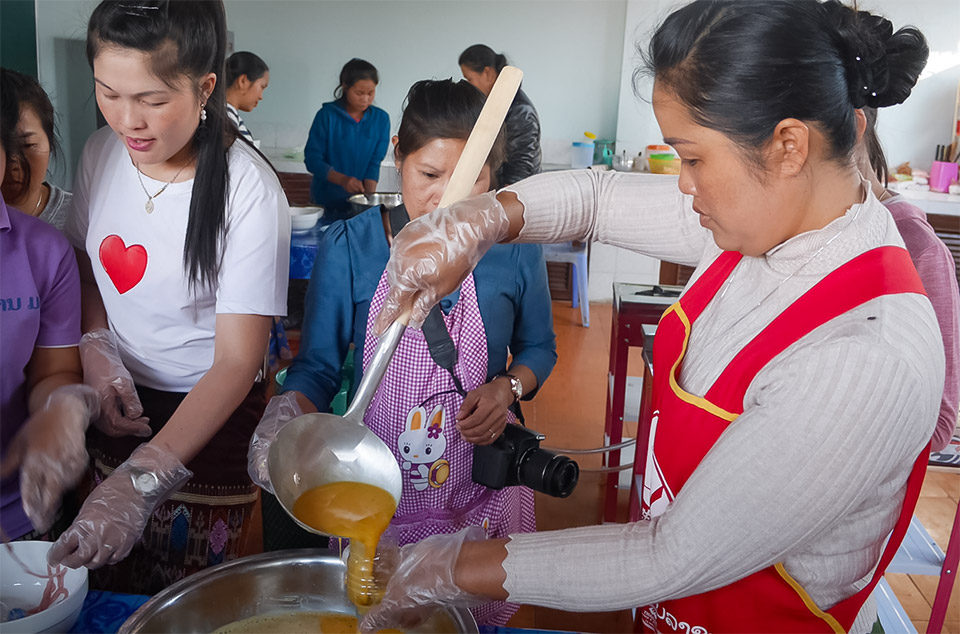 Through a generous grant from the Government of Canada, UN Women and the Lao Women’s Union (LWU) provided such support through a two-week skills-training in cooking and food preservation in Xieng Khouang – one of the most heavily UXO-contaminated provinces in Laos –for women who have been affected both directly and indirectly. When 15 such women, including Minta’s mother, were contacted to take part, they were thrilled at the opportunity to learn a new skill that could increase their incomes.

Participants also got the chance to connect with women facing similar situations. “I used to feel so alone when my husband had his accident,” recalls Tunni, a 23-year-old whose husband was blinded in an UXO accident.

The shared tragedies that united them led many to swap phone numbers and create a WhatsApp group, so their friendships would endure beyond the training.

For women such as Vangpa, who were unable to leave their children at home, childcare provided at the LWU Training Centre made it possible to bring them along. Meanwhile, some of the women who left their children with family admitted, with a mischievous giggle, that attending the training alone meant free time without the stresses of daily life – a rare luxury. 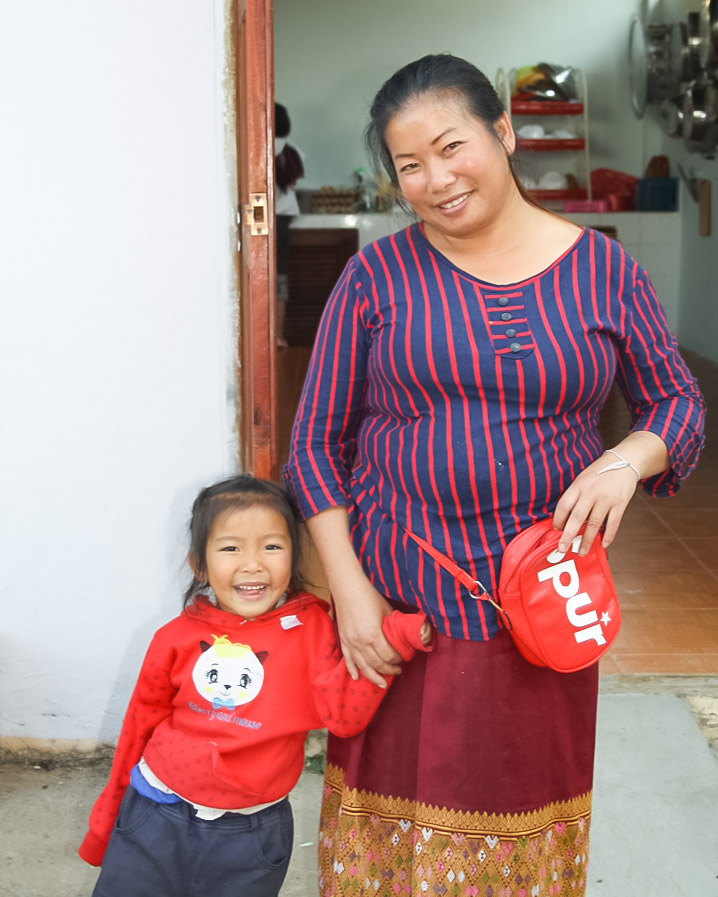 After the training, a smile now lights Vangpa’s face, as hope is reborn. Photo: Courtesy of Keshia D’silva

Vangpa confesses that she had rarely ever left her village, particularly unaccompanied. For these women, leaving their families for an extended period of time, boarding a bus by themselves, being solely in charge of spending the daily subsistence allowance they received during their two weeks at the training centre, participating in their first formal training and obtaining UN Women and LWU certification at the end of it are all empowering milestones.

It was profoundly encouraging to see that a project to incorporate gender into UXO programmes has had the potential to empower women well beyond the skills they developed. After the training, a smile now lights Vangpa’s face, as hope is reborn.

Minta and Vangpa leave the training centre, the hope in their eyes and bounce in their steps is symbolic of this transformation.

Keshia D’silva is a recent Master's graduate in social science from the University of Helsinki who has interned at UN Women in Lao PDR for the past four months. Originally from India, she has also worked on fundraising for UNICEF and assisted with research on justice and empathy. She will soon begin a PhD focused on understanding gender-based violence in India.