In Karachi, a football victory for girls’ rights

Karachi, Pakistan – It was just a one-hour game at a school sports ground, and some of them had never touched a football before. But for all the schoolgirls who came out to play, it was something special. 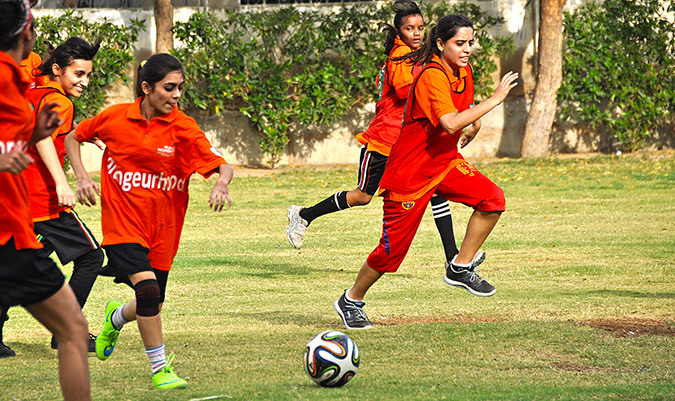 The young players all enjoy a day of football and freedom. Photo: UN Women/Henriette Bjoerge

On 25 February, UN Women Pakistan teamed up with The Diya Women’s Football Club (DWFC) to organize a football match for 35 schoolgirls from less-privileged areas of Karachi. At the sports ground of St. Patrick’s High School, team ”Orange”’ and team ”Colours” played against each other, wearing orange T-shirts to create awareness of the UN’s UNiTE campaign to end violence against women and girls. The players were students from St. Patrick’s High School, Learning Tree School, Aga Khan School (Kharadar), Karachi Women’s College and Asif Government School.

In Pakistan, it is a major challenge for girls and women to find safe public spaces where they can exercise free from harassment and interruption. UN Women’s Safe Cities and Safe Public Spaces programme aims to ensure that they are free from sexual harassment and violence when venturing outside their homes.

“This is a requirement by most of the parents, in order to let their girls join,” she said. Ms. Sheikh has visited almost all the girls’ houses in slum areas of Karachi to persuade the parents to let their girls participate in her football club. In addition to teaching them football, she encourages them to study in school and to reach for their dreams.

Before kick-off, Rukhsar, 24, a sports teacher at Learning Tree School in Karachi, told the girls her own story and encouraged them to work hard.

“I started playing football in 2010, and really had to struggle to get permission to join, especially from my brothers, who didn’t like the fact that I was going outside our home,” she said. “I am the youngest girl in the family, and when I told them I wanted to become a sports teacher, they did not approve. But I decided to not give up. I went to my job, then straight to football practice in the afternoon, and studied for my master’s of mass communication in the evenings. And look at me now! I work as a sports teacher, I am the captain of the DWFC team, and I play for the female national football team!”

For many of the girls, it was the first time they had ever played football. Judging by their enthusiasm and joy, the Club might have recruited several new players. Team “Colours” defeated team “Orange” 2-0 on goals by Nadia Qurban and Mariam Haji.

Shumeila, an 11-year-old from the Metroville site area, has played football for 4-5 years, and is dreaming of becoming a professional player. Her eyes sparkled as she talked about what it would be like to play at the top level. 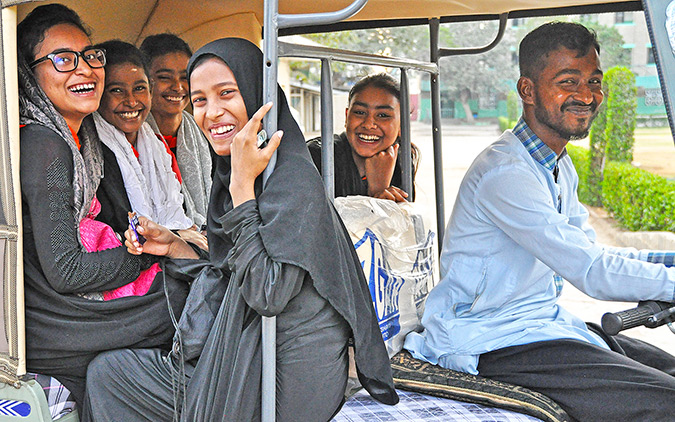 “I used to watch my favorite players Messi and Neymar on TV almost every day, but I never thought that I could start playing myself since I am a girl,” she said. “It was not until I was in third grade and my sports teacher Ms. Aasia said that I had great talent. My kicks were very high and I could reach the goal from a long distance, so my teacher introduced me to DWFC. In the beginning, my father did not allow me to join, but when he heard of my talent, he became proud and eventually said: ‘You are our future, you can join.’ ”

“I was so happy I kissed both my mother and father!” Shumeila said, laughing. Then she said in a more serious tone: “He now wants me to become a big star, and that is also my vision.”

Also in attendance was Zeba Bakhtiar, a well-known actress in Pakistan and Chairperson of DWFC. She gave the girls words of encouragement and applauded their hard work in a male-dominated sport.

“My daughter-in-law introduced me to this sport as she has played football for nearly 10 years,” Ms. Bakhtiar said. “It has truly opened a new window to the world for me. I am amazed to see how dedicated these girls are, and I see great potential in them.”

Although she herself never played football, Ms. Bakhtiar has become a strong supporter of women’s rights to play sports.

“I enjoy being the chairperson for this club, but at the same time it makes me sad to see that these girls are deprived of their opportunities as there is no system in place to lift them up to another level when they succeed. It is very unfair,” she said. “Depriving them the opportunity to develop their talent and future potential is violence against women in my eyes. Therefore, these types of events are so important! We need to show these brave girls support, and help them create platforms to grow by developing safe spaces for them to practice the sport they love.”

The principal of St. Patrick’s High School, Brother Lawrence, let the girls use the school’s sports ground free of charge in order to show support for the UNiTE campaign.

The DWFC management has decided to organize an annual female football event in support of the UNiTE campaign, and to continue their strong support for the cause to end violence against women and girls. 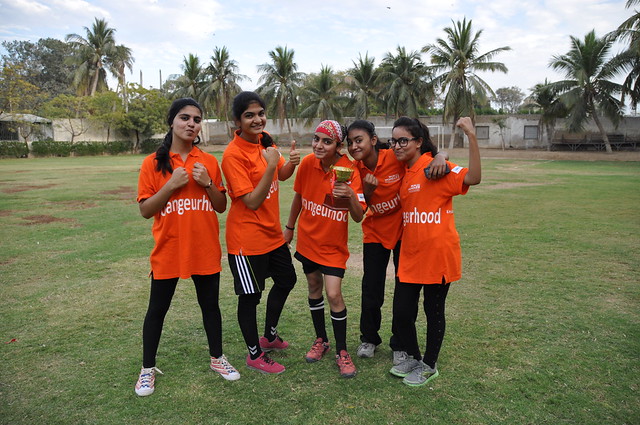