Islamabad, Pakistan – Most Ambassadors and Diplomats had not entered a football pitch in years, and certainly never played football against a national team before. But those who dared to join, got to celebrate the UN International Day of Sports for Development and Peace in a memorable and meaningful way. 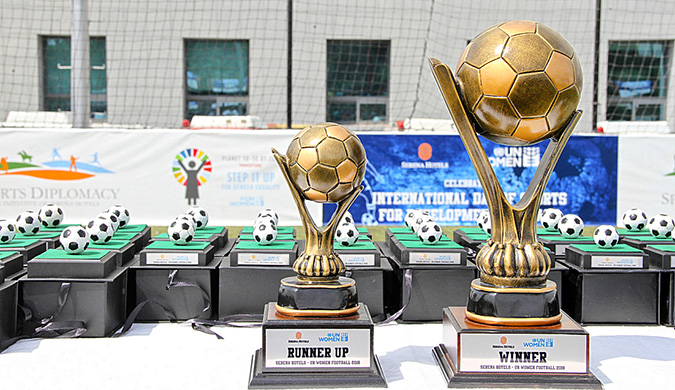 On 10 April, UN Women teamed up with Serena Hotels and hosted a match day to show how football is a powerful tool for social inclusion, gender equality and youth empowerment. Young women and girls from Pakistan’s National Football Team, Rawalpindi’s Young Rising Stars (YRS), and Ambassadors, Diplomats and UN dignitaries participated in the friendly matches. 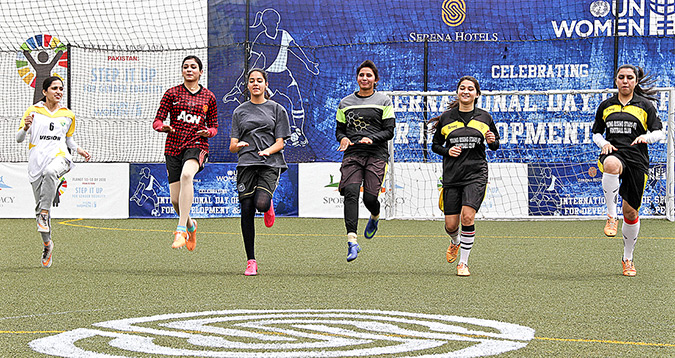 The International Day of Sports for Development and Peace was celebrated under the banner of the Serena Hotels Sports Diplomacy Initiative and UN Women’s ‘Planet 50-50 by 2030: Step It Up for Gender Equality’ campaign and the matches were played at Total football facility, the only FIFA certified football pitch in Islamabad. 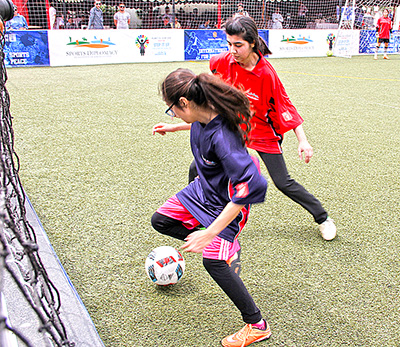 An exhibition match between the Pakistan National Team and YRS kicked off the event, showcasing the dedication, skills and passion that exist within female football in Pakistan. The match was followed by a 6-a-side football tournament with 16 minutes matches between four mixed teams of players from the national team, YRS, Ambassadors, Diplomats and UN dignitaries. Team Planet 50-50 and Team UNiTE put up good competition, while Team HeForShe and Team Sustainable Development Goal 5 (SDG5) qualified for the final. The friendly final tied at 2-2, which led to nail biting excitement as both teams had three penalty kicks each. Team HeForShe scored two goals, and Captain of the National Team Ms. Hajra Khan stopped two penalty kicks from Team SDG5, which led Team HeForShe to victory. 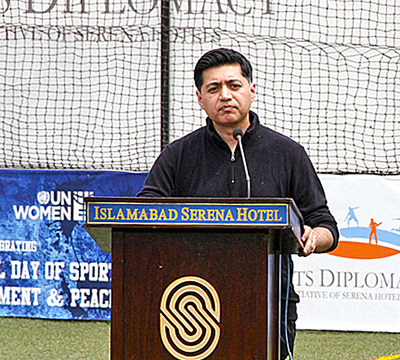 Mr. Jamshed Kazi, Country Representative of UN Women Pakistan, who successfully scored one of the crucial penalty kicks for the winning team, said: “In Pakistan, one of the key challenges for women and girls in sports is the lack of safe public spaces making it difficult to find places to exercise or play without facing harassment or even worse. UN Women, through one of its initiatives to combat violence against women aims to create greater awareness and implementation of legislation and adoption of practices that ensure that women’s rights to safe spaces is safeguarded and that urban and local planning bodies take this into account. Sport creates confidence, a healthy lifestyle, team spirit and breaks down gender stereotypes of girls as being weak and physically inactive- investing in enabling opportunities for women and girls to participate in sports is investing in a healthier, equitable and more productive and harmonious nation”.

Speaking after the tournament, Ms. Sana Mahmud, former captain of the Pakistan’s female National Football Team said; “Sport really has changed who I am. The person that I am today is only because of the fact that I play sport. Everything that I have learned, all the memories that I have, all the friends I have made, and everything else in my life, and even the future, it’s all because I play sport. Somehow, luckily I ended up in sports”.

In closing the games and tournament Mr. Aziz Boolani, CEO of Serena Hotels said: “Sports have the potential to bring about great personal and social changes through better health, fostering gender equity, strengthening and unifying communities, improving education outcomes, and building skills that promote employment and economic development. We are proud to collaborate with UN Women to raise awareness about inclusion in sports and celebrate development and peace through sports.”

Honorary guests included Ms. Brigitta Blaha (Ambassador of Austria), Ms. Helle Nielsen (Chargé d’Affaires of Denmark) and Mr. Neil Buhne (UN Resident Coordinator) who all welcomed the opportunity to play alongside the female stars, while Ms. Ina Lepel (Ambassador of Germany) and Ms. Heather Cruden (High Commissioner of Canada) spectated and cheered for the teams from the sideline.

The event gave the uplifting message that football is no longer a game dominated by boys and men. Pakistan’s female National Football Team and the young girls from Rawalpindi’s Young Rising Stars showed that sport is a powerful tool for developing confidence, team spirit, skills and leadership, and for spreading messages of peace and driving social change. 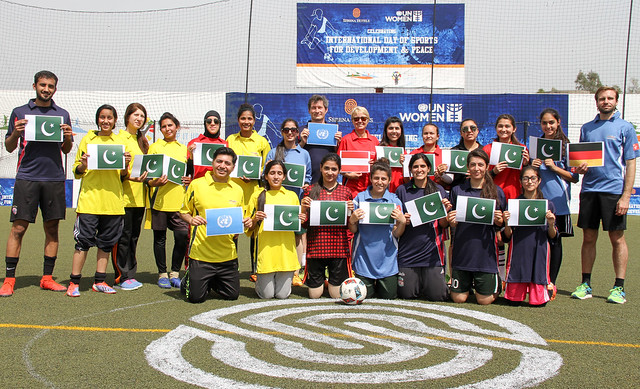