Ha Noi, Viet Nam –  “10 years ago, the Convention on the Elimination of All Forms of Discrimination against Women (CEDAW) was not widely known by the government and civil society. It was just something on the paper. Now, many civil society organizations understand and apply CEDAW in their work” said Ms Ngo Thi Thu Ha, Vice Director of Center for Education Promotion and Empowerment of Women, a local NGO in Viet Nam. 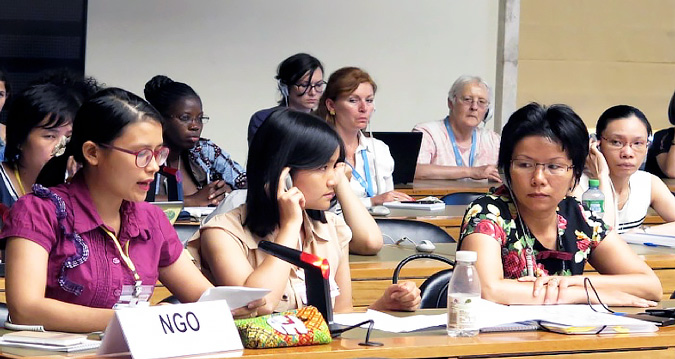 Viet Nam is at a turning point for advancing gender equality and empowering women – 10 years has passed since the Law on Gender Equality was adopted in 2006. Today, violence against women is considered a public issue, parental leaves are extended, domestic work is recognized as work, and preferential tax policies for women are in place for companies that hire a large number of women. These are all commendable achievements which must have been hard to imagine in the absence of a national law spelling out what constituted gender based discrimination.

Nevertheless, Viet Nam’s rank in the Gender Gap Index of the World Economic Forum has fallen from 42nd in 2007 to 83rd in 2015. While many good laws and policies came into place, implementation has been a major challenge. In fact, only four out of 22 targets of the National Strategy for Gender Equality were met during the 2011-2015 period, according to the report of the National Assembly Committee of Social Affairs.

One of the unmet target on women’s political representation is under particular attention this year as Viet Nam holds the election for the National Assembly deputies in May. The proportion of female deputies under the 2011-2015 National Assembly term was at 24.4%, the lowest over the last four terms. Last year, the CEDAW Committee called upon the government to meet the national target of 35% elected female deputies in its Concluding Observations.

Mr. Tran Van Thien from the Department of Labour, Invalids and Social Affairs in Kon Tum Province said that strong support from Party leaders will be crucial to elect more women to decision-making positions. The recent appointment of Ms. Nguyen Thi Kim Ngan as the first Chairwoman of the National Assembly brings high hopes for stronger leadership demanding for gender equality and women’s empowerment. 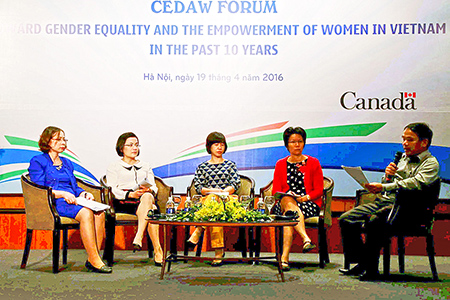 The same report of the National Assembly Committee also revealed that half of the national targets were unable to be measured due to issues with data. Mr. Nguyen Trong Dam, Vice Minister of Ministry of Labour-Invalids and Social Affairs (MOLISA) emphasized the need for strengthening evidence based and independent assessment to understand the weaknesses in law and policy implementation. “We need support from the civil society and research institutions to provide a balanced understanding of the situation. Only then we can seek for solutions” he added.

Implementation of CEDAW requires a concerted approach through joined-up actions by multiple stakeholders. Since 2004, UN Women has supported the implementation of CEDAW in Viet Nam with financial support of the Government of Canada through the Regional Programme on Improving Women’s Human Rights in Southeast Asia (also known as CEDAW SEAP). The Programme worked with a range of partners from MOLISA, Ministry of Justice and the judicial training institute, National Assembly Committees, Viet Nam Women’s Union, Committee on Ethnic Minority Affairs and a number of civil society groups, reaching out to more than 2000 individuals.

“We need to open up more space for civil society to be part of advising and providing feedback on whether the policies and laws are working. They are essential in giving women a voice, in channeling collective action and advocacy, and in demanding gender-responsive action.” said Shoko Ishikawa, UN Women Country Representative specifically remarking on the role of civil society in implementation of CEDAW.

“Canada vigorously supports equality for all - regardless of gender, religion, colour, race, age or sexual orientation. We believe that human rights are indivisible: we can’t be selective in choosing which human rights to defend or whose rights we protect” said Ambassador of Canada to Viet Nam, H.E.Mr. David Devine.

The Viet Nam National Plan of Action to implement the Concluding Observations from the CEDAW Committee, which is being developed under MOLISA’s leadership, will be one crucial opportunity to take stock of the partnerships established and strengthened though the CEDAW SEAP Programme. At the same time, good indicators as well as capacity to collect and analyze data and information are needed so that no target will be left in the dark.

The Convention on the Elimination of All Forms of Discrimination against Women (CEDAW) was adopted by the United Nations General Assembly in December 1979. It entered into force as an international treaty on 3 September 1981 after the twentieth country had ratified it. Among the international human rights treaties, the Convention takes an important place in bringing the female half of humanity into the focus of human rights concerns. The Convention establishes not only an international bill of rights for women, but also an agenda for action by countries to guarantee the enjoyment of those rights. Viet Nam was the 6th country in the world that joined CEDAW and has made significant efforts to implement its commitments to promote gender equality.