Staying true to yourself: A tale of discrimination and love in Cambodia

Prey Sdouk Village, Cambodia – For most of her 48 years, Sao Mimol has endured taunts, from her family at home and from strangers on the street. But she remains bubbly and happy because she still chose to stay true to herself. 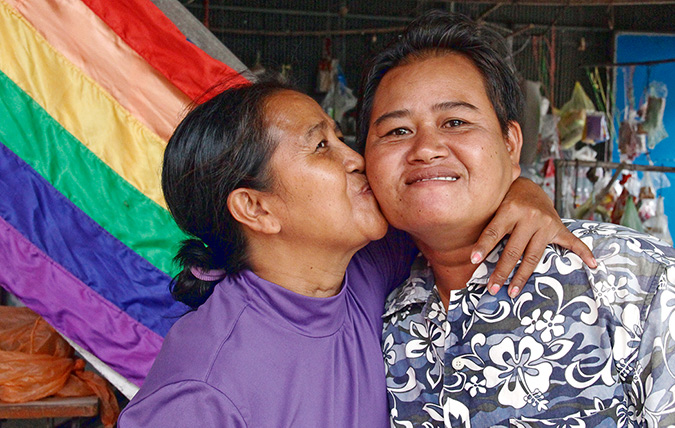 By the flag of LGBT pride, Sao Mimol kisses her partner during the workshop in Takeo. Photo: UN Women/Mariken Harbitz

Even though she had many brothers and sisters while growing up in Takeo Province near Phnom Penh, Ms. Mimol often felt outside of the box, disconnected from the world around her.

She was 20 when she first realized that she was attracted to other women. She was then a garment factory worker in Phnom Penh; the road to love and happiness seemed to wind endlessly.

“When I first came out, my siblings did not allow me to love women,” she recalled. “Since then, my family has always used bad words to describe me and my love life. … My family told me that I wouldn’t be able to have children, and they thought I would never be happy in life.”

Ms. Mimol’s story was one of the many heartbreaking, yet empowering life stories heard during a 21-25 May workshop in this village in Takeo’s Bati District for LGBT people and their supporters. It was part of a LGBT PRIDE event organized by Cam ASEAN, a Cambodian human rights group supported by UN Women.

About 30 people came to the workshop each day: men, women, transgenders, even children. They said the gathering gave them more courage to stand up for their rights. They were glad to know that there are others like them in the community, and that there are groups like Cam ASEAN willing to help.

Ms. Mimol looked at the other LGBT couples in the crowd, and continued her story: “I still chose my life, even if because of that choice I have suffered from a lot of discrimination.”

When she was 28, Ms. Mimol fell in love with a transgender person. Ms Mimol was in the hospital, and her partner took care of her and made sure she got better. Finally, she had found what she had been seeking on that long road.

The couple moved back to Takeo to build a home. Today, they make a living selling ice cream from a mobile stall. But Ms. Mimol does not need to be reminded that she did not leave discrimination behind in Phnom Penh.

“When I drive around in the village and sell ice cream, I still get bullied by my neighbors and even by my customers,” she said. “They don’t understand that I should be allowed to love whomever I want.”

But she said she has never doubted her choice to stay true to her own feelings and beliefs.

“Up to today, I have been so glad that I looked beyond my family and started a life with the person I love,” Ms. Mimol said.

“And we still love each other,” she said, smiling and counting with her fingers the 15 years they have lived together in the same house. “And at least 15 more years to come.” 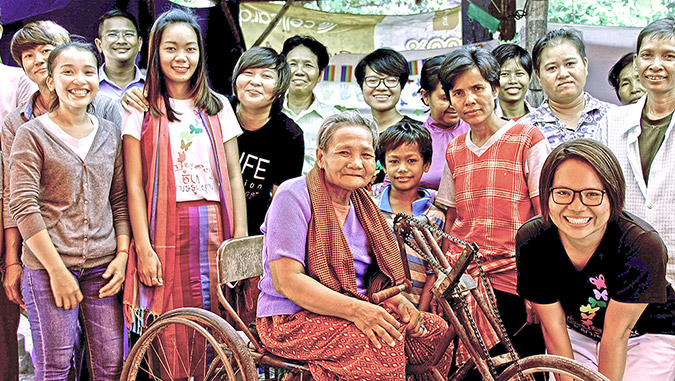 Happy to meet people like themselves at the workshop in Takeo. Photo: UN Women / Mariken Harbitz

Related News
21/05/2016
‘I am what I am’: In Phnom Penh, a rainbow and costume rally against discrimination
31/03/2016
Riding for Women's Rights
01/09/2015
A Cambodian woman’s journey to overcome personal obstacles and become a champion for migrant workers’ rights
05/12/2014
Why women need technology and technology needs women
23/11/2014
Beijing+20 in the eyes of the media
END_OF_DOCUMENT_TOKEN_TO_BE_REPLACED