The advocacy event, which is organized by UN Women, Proya Cosmetic Company, Beijing Roller Derby, and seven other sponsors, is the International HeForShe Roller Derby Invitational. The event will attract a large audience of nearly 500 people to the Ditan Olympic Gymnasium in Beijing, China. The aim of this advocacy event is to raise awareness of UN Women’s global “HeForShe” campaign and China’s newly passed national law against family violence. This event will use the medium of sport to convey messages that women are strong, fast, agile, and should never be victimized. The featured sport is roller derby, a sport closely linked to women’s empowerment.

To encourage more people around the world to support gender equality, UN Women has launched the global HeForShe campaign in September 2014. HeForShe is a solidarity movement for gender equality developed by UN Women to engage all people as advocates and agents of change for the achievement of gender equality and women’s rights. The campaign is encouraging people to speak out and take actions against inequalities faced by women and girls. Gender equality is not only a women’s issue, but it is also a human rights issue that affects everyone – women and girls, men and boys.

Today’s event will feature a scrimmage between two “HeForShe” teams composed of a mix of roller derby players from Beijing, Bangkok, the UK, and Japan. Coaches and referees were from the USA and Canada. This event is marking the first time that a roller derby bout has ever been played in China.

In support of this advocacy event, Ms. Xue Li who will represent the State Sports Administration, says: “Advocacy efforts could and should also focus on sports featuring women. Men need to see women as strong athletes, women as worthy of attention, and women’s sports as equal to men’s sports.”

Ms. Anna-Karin Jatfors, Deputy Regional Director of UN Women, states: “At the heart of HeForShe is the understanding that achieving gender equality in our lifetimes is possible, but only if we engage men as partners for women’s rights, and acknowledge the ways in which they also benefit from this equality. Being a HeForShe means to join a struggle that for gender equality that for too long was seen as the business of women alone, as equal partners in helping to realize a common vision that will benefit not just women but all of humanity.”

Famous and well-known film and TV star Zhu Yawen as a HeForShe advocate says: “Not only as a celebrity, but also as a father, husband and man who lives in society, I hope we can create a gender-equal world for our future generation. It is a social responsibility for each man. We need to love and respect women and support them to be strong and independent.”

Pledging as a HeForShe advocate, Wang Meng, a representative of Chinese female athlete and a four-time Winter Olympic Gold Champion, says: “I will try my best to advocate gender equality so that women will have the equal rights with man not only in the sports field but also in other areas such as political participation and equal employment.”

Moderator Yu Jia wrapped it all up at the end as a HeForShe advocate when he observed: “The message from today is clear. The medium of sports is ideal for reaching men and boys with the HeForShe and women’s rights messages. Men are part of the problem, so they have to be part of the solution. Without gender equality, there will be no solution to the world’s problems.”

To join this worldwide movement and make a commitment to make a change, pledge support to www.heforshe.org/zh and click “I Agree” to show your solidarity. To learn more about the program and track its progress, visit www.heforshe.org/zh or http://asiapacific.unwomen.org. 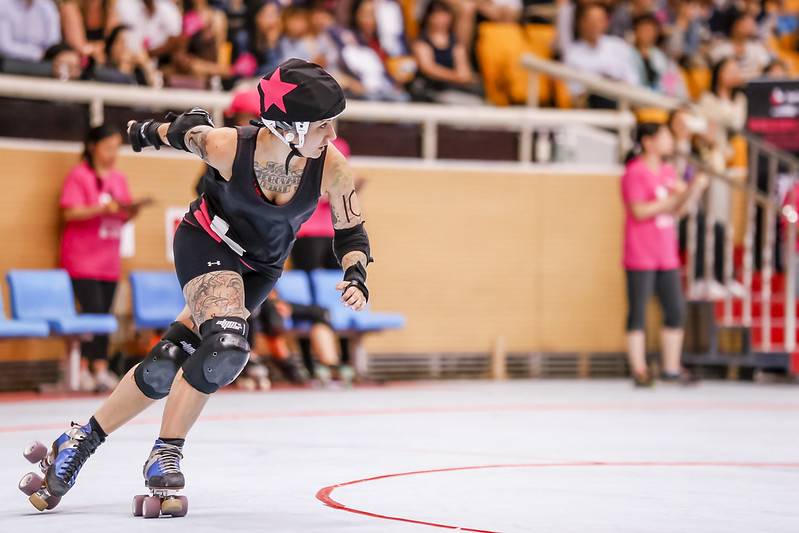 UN Women is the United Nations organization dedicated to gender equality and the empowerment of women. A global champion for women and girls, the organization was established in 2010 to accelerate progress on women’s rights worldwide. UN Women’s efforts are based on the fundamental belief that every woman has the right to live a life free from violence, poverty, and discrimination, and that gender equality is a prerequisite to achieving global development.About Beijing Roller Derby

Formed in 2013, Beijing Roller Derby is one of three roller derby leagues in China. BRD was founded by UK transplant Jay Latarche and Texan Hooten Annie, who met online through a shared love of the sport. In the years since founding BRD, the league trained up a team of 20 -- mostly beginning-level -- skaters with bi-weekly training sessions and practice matches. Beijing Roller Derby wants to have a good time, play roller derby, and help promote the sport throughout China.

Established in 2003, Proya is a Chinese leading Cosmetics research and manufacturer that applying high bio-technology to manufacture skin-care products. So far the company has successfully created 6 brands including PROYA, UZERO, ANYA, YOYA, CATS & ROSES and O’LAXSN with over 1000 products, able to satisfy the demands of consumers of different age and with different preferences; established nationwide distribution network across more than 30 cities, covering department stores, cosmetic boutiques, large supermarket chains and electronic business platforms. The company has successfully realized the multi-brand, multi-category, multi-channel and multi-model operation and development mechanism, achieving a leading position in the Chinese beauty market.

Guangzhou Nice Court flooring Co. Ltd. is a leading global manufacturer of synthetic materials for sports and recreation flooring in China, established in 2004. They have set clear corporate goals, i.e. be the most professional provider of sports and recreation flooring, along with providing their customers with advanced technologies and products. They have been chosen as the designated sports flooring products by the organizers of professional sporting events both at home and abroad and claim to be Asia's largest manufacturer of Suspended Modular Sports Floor.

The Women’s Flat Track Derby Association is the international governing body for the sport of women’s flat track roller derby and a membership organization for leagues to collaborate and network. The WFTDA sets standards for rules, seasons, and safety, and determines guidelines for the national and international athletic competitions of member leagues. There are currently 369 WFTDA member leagues and 76 leagues in the WFTDA Apprentice program.

PricewaterhouseCoopers (known as PwC) is a multinational professional services network headquartered in London, United Kingdom. It is the largest professional services firm in the world, and is one of the Big Four auditors, along with Deloitte, EY and KPMG. As of 2015, PwC is the 6th-largest privately owned organization in the United States. PwC is a network of firms in 157 countries, 756 locations, with more than 208,100 people. The company's global revenues were $35.4 billion in FY 2015, of which $15.2 billion was generated by its Assurance practice, $8.9 billion by its Tax practice and $11.3 billion by its Advisory practice.

Western Academy of Beijing (WAB), founded in 1994, is private non-enterprise not-for-profit organization belonging to the WAB Foundation and overseen by an all-volunteer Board of Trustees, incorporated in Beijing, China. It is schooling 1400 students from various countries from elementary school to high school level. WAB demonstrates its moral commitment through its philanthropic involvement and strong community ties. They run initiatives, such as the construction of an environmental center to teach students about eco-friendly environmental technologies.

Doko is a subsidiary under parent company Fella’s Food & Management LLC, a wholly foreign-owned enterprise (WFOE) in Beijing. A Beijing-based restaurant providing healthy meals, Doko aims at offering people quick, nutritious and delicious dining options and promotes a healthy diet. Their choices of meat, tofu and sauces are based on healthy principles. Besides that, in order to promote a healthy lifestyle, all beverages are non-alcoholic.