An estimated 40 – 50 per cent of migrants in Hanoi and Ho Chi Minh City, the two biggest cities in Viet Nam, are women, and they face distinct challenges. Low and unstable incomes and lack of social protection make them particularly vulnerable to abuse and exploitation. But migrant women workers of Viet Nam refuse to live on the fringes any longer. More than 10,000 migrant workers have learnt how to access social welfare benefits, legal protection and health care. They are advocating for their rights and helping one another. 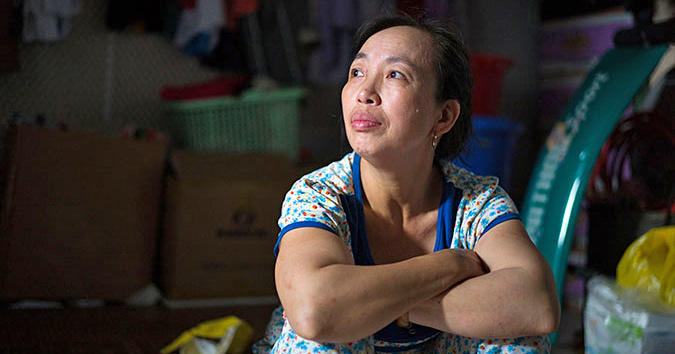 “When my husband died, my mother-in-law threw me and my daughter out of the house. I moved to Hanoi to find work,” shares Hau, a 37-year-old migrant woman from Hai Duong province in northern Viet Nam. She lives in a shanty house in the An Xa neighbourhood with her 12-year-old daughter. Hau pedals around the city all day on her bike, selling brooms and boiled sweet potatoes. On a good day, she makes around six dollars.

When asked why she moved to the city, Hoa, another migrant woman answers, “Because there was nothing to eat at home.” Her family had a small rice field in the Ha Nam province, 60 Kilometres south of Hanoi, which didn’t produce enough to feed the family. For 17 years now, Hoa has biked around the city, selling chicken and duck eggs, earning around five dollars a day. She rents a 25 square-metre shanty house in Phuc Tan Ward, not too far from where Hau lives, with five other migrant women, for $120 per month. Her husband and children are still in Ha Nam, and with her remittances, the family manages to make ends meet. 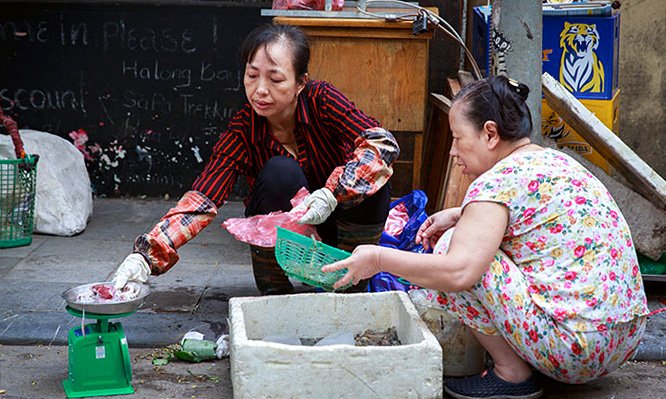 Many migrant women travel around Hanoi by bike to sell merchandise on the roadside. Photo: UN Women/Pham Thanh Long

Since the mid-1990s, rapid industrialization and urbanization in Viet Nam have led to an ever-increasing flow of migrant workers from rural to urban areas. In 2014, the Vietnamese Government estimated there were 9.2 million domestic migrants in urban areas. An estimated 40 to 50 per cent of migrants in Hanoi and Ho Chi Minh City, the two biggest cities in Viet Nam, are women, [1] and they face distinct challenges.

Migrant women workers like Hau and Hoa, making meagre income in the informal economy, lack access to basic social protections. They are more likely to be self-employed (61.2 per cent) than their male counterparts (33.2 per cent) [2] and most of them do not have labour contracts. While almost all of migrants (99 per cent) have no social insurance or work-related accident insurance, women have lesser access to health care services. Far from traditional family support systems, low and unstable incomes, scarce benefits and social exclusion make them more vulnerable to abuse and exploitation.

“I used to live among rats and garbage. As migrants, our jobs are unstable. As house maids, we can get cheated out of our salary or suffer sexual harassment in the hands of our employers… ” says Huong, who moved to Hanoi from Nam Dinh province seven years ago. 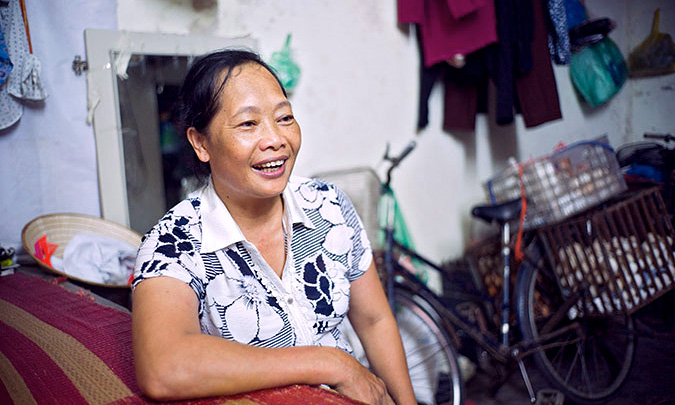 Hoa migrated to Hanoi from the countryside 17 years ago and now sends remittances back to her family in Ha Nam province. Photo: UN Women/Pham Thanh Long

Hau, Hoa and Huong are among 10,000 rural migrant workers who have benefited from ‘We are Women’, a three-year programme that started in 2013, funded by UN Women’s Fund for Gender Equality and implemented by the Institute for Development and Community Health. The programme has increased their capacity to access and use available social welfare benefits, legal protection and health care services. They have also gained access to better job opportunities and learned about occupational safety standards and labour rights.

“We believe that our joint efforts will create a society where no migrant workers, and no female migrant workers in particular, are left behind,” says Shoko Ishikawa, UN Women Country Representative in Viet Nam. “It is clear that there is much to be done to support this growing and vulnerable population, but with capable, skillful and confident women like Hoa, Hau, Huong and many others, a brighter future is within our reach.” 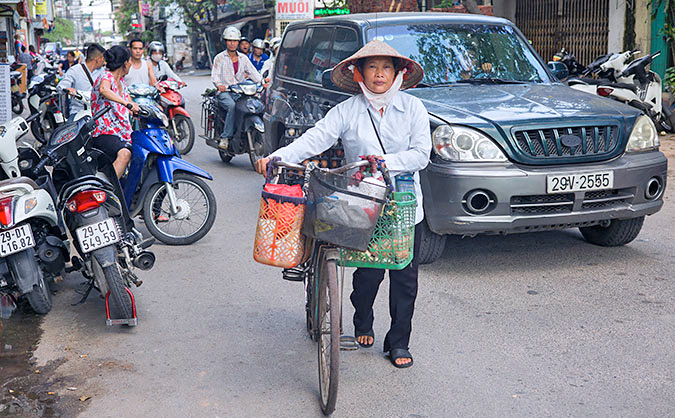 The first community-based network for migrant women in Viet Nam set up by the programme now has 33 members, who facilitate regular group meetings with local migrant women. They share relevant information and advocate with local authorities to ensure that migrant women’s needs are taken into account.

“I have become more confident, I don’t hesitate to share my ideas with others. I have also helped other migrant women with the knowledge I gained about our rights," says Hoa. “The group meetings are a real necessity for us. They not only bring new knowledge, but also bring joy, laughter, comradery into our lives,” she adds.