From the Margins to the Center: Step it Up for Women and Girls in Myanmar’s Peace Process

Yangon, Myanmar – On the 16th anniversary of the adoption of Security Council resolution 1325, UN Women in Myanmar organized a multi-stakeholder panel dialogue focused on women’s empowerment, participation and leadership in the Myanmar peace process. More specifically, the panel focussed on the specific strategies to ensure (a) 30 per cent participation of capacitated women in Myanmar’s Peace Dialogues and (b) that all issues are addressed and acted upon also from a gender equality and women’s rights perspective. The event held on 31st October at Inya Lake Hotel brought together about a 100 representatives of governments, civil society, international organizations, and media.

The ground breaking resolution adopted on 31st October 2000 marked the first time the Security Council linked women’s experiences of conflict to international peace and security. Resolution 1325 recognized the differential impact of conflict on women and girls. It affirmed the important role of women in all stages of the peace process, including conflict prevention, resolution and peace building, and stressed the importance of their equal participation and full involvement in all efforts for the maintenance of peace and security. Resolution 1325 and seven subsequent resolutions adopted in the next 15 years form the legal and normative framework for the women, peace and security agenda.

The event began with opening remarks from Dr San San Aye, Deputy Director General of the Department of Social Welfare within the Ministry of Social Welfare, Relief and Resettlement and Dr Jean D’ Cunha, Head of UN Women Myanmar. Says Dr San San Aye, “it critical to implement the National Strategic Plan for the Advancement of Women and women, peace and security is an important part of that agenda.” “Lessons for Myanmar from global good practice”, says Dr. Jean D’Cunha “are tailored responses to the specific situations of women and men in conflict and peace, participation of capacitated and gender aware women in Myanmar’s peace process and addressing every issue from federalism to the economy to every other, also from a gender perspective” The interactive panel discussion consisted of representatives of government, local and international civil society organizations, as well as UN Women. Discussion focused on strategies to enhance women’s representation and influence in the peace process, as well as highlighted women’s key priorities across thematic issues that should be incorporated in upcoming national peace dialogues.

Panel discussants (Dr San San Aye, GOM, Susanna Hla Hla Soe, MP, May Sabe Phyu, GEN, Nang Shan Lapai, Shalom, Thuzar Tin, Women’s federation for Peace, Birke Herzbruch, Trocaire and Emmicki Roos, UN Women) acknowledged the progress that has been achieved in recent years. In the nationwide ceasefire negotiations that began in November 2013, two negotiators out of 32 total delegates were women and the agreement text incorporated three gender provisions. The incremental progress in the number of women represented is also reflected in the peace conferences. In the first Union Peace Conference in January 2016, 7 per cent of delegates were women, and at the 21st Century Panglong Conference in September 2016, 13 per cent of delegates were women.

Nevertheless, women’s representation in the peace process falls far below the 30 per cent necessary for women to gain critical mass to exert influence through meaningful participation, as recommended by the Committee for the Elimination of all Forms of Discrimination against Women (CEDAW). Participants reiterated the need for implementation of the 30 per cent quota for women’s influential representation, which has been raised in ceasefire negotiations and political dialogues. Key strategies include establishing a gender policy committee or commission to oversee all peace process structures and mechanisms in order implement the minimum 30 per cent gender quota and to ensure that gender equality is an overarching principle in all reconciliation and peacemaking efforts, as well as capacity building for women leaders’ influential representation. In addition, participants suggested other measures that can increase women’s representation at all levels of the peace process, including ensuring women’s representation in ceasefire monitoring committees and taking practical steps help women overcome financial and time-constraints that may be a hurdle to participating in public life.

Recognizing men’s role as gatekeepers, participants also raised the need to identify men who are willing to champion for women’s increased meaningful participation and include men as part of the solution in addressing gender inequality in the peace process. They underscored the need to increase awareness and sensitization to gender inequality issues for both men and women, not only to improve women’s representation in public life but also to move post-conflict Myanmar towards a gender just society. 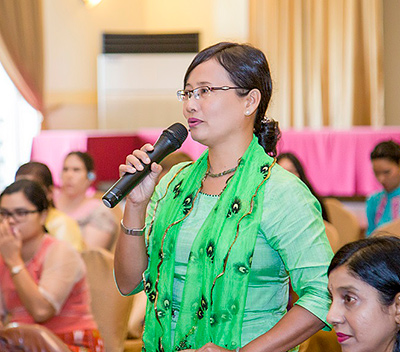 Beyond representation in terms of numbers, participants also highlighted key priorities that should be addressed in the peace process as identified by women leaders and women’s organisations. For example, long-term economic recovery and peacebuilding efforts should include dedicated investments in women’s economic empowerment. Additionally, post-conflict economic reconstruction investments should consult with women to ensure that investments, including natural resource and infrastructure projects, take into account and address the differential impacts of these projects on women and other community members. Women’s priorities in the peace process address key social and economic concerns including healthcare, education, and natural resource management.

These recommendations reflect women and women’s organisations notion of peace, which is defined not just as the absence of hostility, tension and violence, but as a situation marked by justice, equality, freedom and development for all – the absence of which are root causes of conflict. Their notion that peace and development are deeply intertwined, stem from their lived experience of the damaging short and long term impacts of conflict on entire communities.

As emphasized by panel discussants in their interventions, women’s participation in the peace process is not only a human right, but also improves the peace agreement’s quality and likelihood of success given women’s holistic and broad-based approach to peace and development in Myanmar.

Related News
20/06/2022
A coffee house as a beacon of hope
09/03/2021
STATEMENT on International Women’s Day 2021
11/02/2021
UN Women calls upon all stakeholders to listen to the voices of women in Myanmar in response to political events
10/12/2020
From where I stand: “If more ethnic groups were invited to the high-level discussions, we would be able point out what the situation looks like for us, including the specific challenges women are facing”
30/10/2020
From where I stand: “I will never stop advocating for women’s rights and security. Because if women don’t feel secure, how can Myanmar be secure?”
END_OF_DOCUMENT_TOKEN_TO_BE_REPLACED