Respective media outlets are cordially invited to attend the PRESS CONFERENCE on Ms. Mlambo-Ngcuka’s visit, on Friday 2nd December between 15:20 P.M. - 16:00 P.M. at the Press Room, Taurama Aquatic Centre. The conference is facilitated by the UN Women Country Representative, Jeffery Buchanan, and followed by the Q&A session with the Executive Director. Participating reporters are also welcome to proceed to cover the SANAP WANTAIM concert organized by the National Capital District between 16:00 P.M. and 17:30 P.M. at the same venue, Taurama Aquatic Centre. 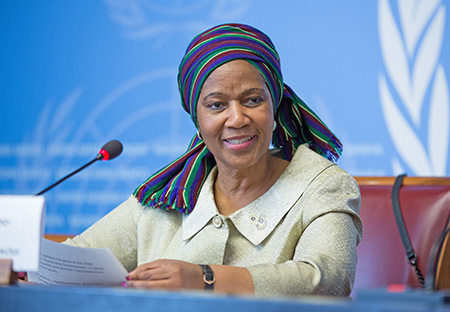 As this is the highest delegation to visit the country during the 16 Days of Activism, it is of critical importance to the work of UN Women and more widely to the ongoing campaign against all forms of gender-based discrimination. We would like to convey her message against violence and empowerment of women as widely and profoundly as possible. Therefore, your attention to and coverage on this special occasion are highly appreciated. To clear the security check at the gate, respective names of attendees need to be registered with us beforehand. Please send names of reporters no later than noon Wednesday 30th November to Chika Kondoh, the communication specialist in the United Nations.

Related News
03/12/2021
Take five: “Don’t focus on yourself as the leader, but look at others and improve their lives.”
03/12/2021
UN Women helps market vendors in Papua New Guinea rebound from the pandemic
23/11/2021
From where I stand: “Men can positively change.”
02/11/2021
From where I stand: “ I used my own money to contribute to building violence — free homes”
12/08/2017
Port Moresby’s youths advocated for peace, in celebration of International Youth Day
END_OF_DOCUMENT_TOKEN_TO_BE_REPLACED