A Call for Action to Leave No-One Behind, Including People with Disabilities

Islamabad, Pakistan — Under the theme ‘Achieving 17 Goals for the future we want’, the International Day of Persons with Disabilities was commemorated on 2 and 3 December 2016 as part of the 16 Days of Activism to end Gender-Based Violence. This year’s theme notes the recent adoption of the 17 Sustainable Development Goals (SDGs) and the role of these goals in building a more inclusive and equitable world for persons with disabilities. 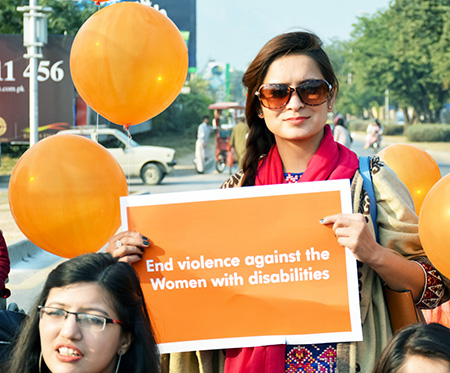 On 2 December, UN Women together with the UN Information Center (UNIC) organized a networking lunch to give various organizations for persons with disabilities an opportunity to interact with representatives from international organizations and the diplomatic community. In welcoming guests, Mr. Neil Buhne (UN Resident Coordinator) said that 2016 marks 10 years since the adoption of the Convention of the Rights of Persons with Disabilities, and “the UN will leave no-one behind.” Ms. Nina Hal Schjelderup (Norwegian Charge’ d’Affaires) shared: “One should rather focus on abilities than disabilities in the context of inclusiveness.”

Speaking during the press conference, Ms. Abia Akram, CEO of NFWWD and the first woman from Pakistan to be the coordinator for the Commonwealth Young Disabled People’s Forum said: “I am proud to speak on behalf of women with disabilities in Pakistan. Women with disabilities represent 1 in 5 women worldwide and 65% of the billion people with disabilities across the world. Yet, their voices remain almost silent in mainstream decision making processes, and even in gender and disability decision-making processes; gender- or disability- programming often fail to adequately address their rights and needs.” “The mantra of the 2030 agenda is ‘to leave no one behind. Let’s start by prioritizing people with disabilities, and make sure that no one, especially women and girls with disabilities are not left behind, but are given the opportunity to contribute actively to the life of our country,” she added. 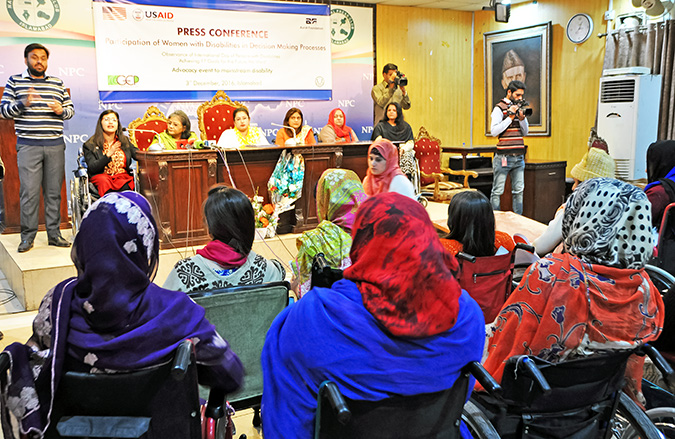 Participants strategizing on how to tackle issues and challenges faced by women human rights defenders across the country. Photo: UN Women/Henriette Bjoerge

Ms. Sangeeta Thapa (Deputy Country Representative, UN Women Pakistan) said: “UN Women has been working to mainstream disability into the gender equality agenda, and at the same time, also strongly advocates for gender perspectives to be mainstreamed into the disability agenda. And while we continue to advocate for women with disabilities to be an integral part in all development processes including at all stages of recovery and reconstruction efforts in the humanitarian setting, what is most important within this, is that women with disabilities are not seen as victims, but as survivors, right holders, contributors, achievers and role models for all of us.”

In their remarks Ms. Fareha Bajwa (National Commission on the Status of Women), Miss Mahpara (Aurat Foundation) and Ms. Tahira Aurangzeb (Member of National Assembly) pledged their support for inclusion of more women with disabilities in decision-making processes. Other organisations represented at the press conference were CBM, Sightsavers, Women Chamber of Commerce and LC Disability and Development Program Pakistan.

TESTIMONIALS FOR A MORE INCLUSIVE WORLD FOR PERSONS WITH DISABILITIES

Ms. Maria Zia (29): “I got a disease at the age of 15, and gradually my eye sight disappeared. I am now 100% blind and rely on others to help me with most things. It is difficult. My biggest challenge is to move in new places. As a recent graduate at university, I am currently looking for a job. It was really difficult to get admission to university. They rejected me several times. But thanks to a dear friend, Ms. Saima Ammar (late) who was an activist fighting for visually impaired people, the management of the university finally gave in to her persuasion so I could study media and communications. I now hope that employers will give me a chance despite being blind.”

Ms. Najma Taheer (29): “Actually, women are the ones who harass me the most. Several women have told my mother to keep me at home and not let me out, as they think I put shame on my family because of my disability - me, my sister and brother are all deaf. As a deaf woman in Pakistan I face double discrimination. Most people are not willing to hire a woman where sign language is required.”

Ms. Narin Aziz (54): “I was holding my 1-year old daughter when the bus I was in met with an accident, back in 1993. The bus was driving through a hilly area on its way from Bagh to Islamabad, and rolled down the side of a mountain, leaving 27 people dead and 39 injured. Thankfully my daughter was fine, but I suffered spinal cord injury. My life was turned upside down, and as a teacher I faced many problems in transportation and accessibility.”

Ayesha Arshad (27): “I got polio at the age of 4 months, and have been wheel-chair bound since then. There is a lack of general awareness on disabilities, so many people don’t know how to deal with people with disabilities. Instead of showing genuine sympathy and help in a selfless way, some help me only because they think they will be rewarded by God.”

Ikra Noor (26): “I have dwarfism and face uncountable challenges, but I never give up. Having recently held an internship at a local bank, I am now aiming to study for a Master’s degree at university. Every time people stare at me I try to ignore it. I always tell myself that these people have rubbish attitudes, and then I try to brush it off. But it never stops, and it always hurts. I am hoping that the Pakistani government will put more focus on how to respect women with disabilities.” 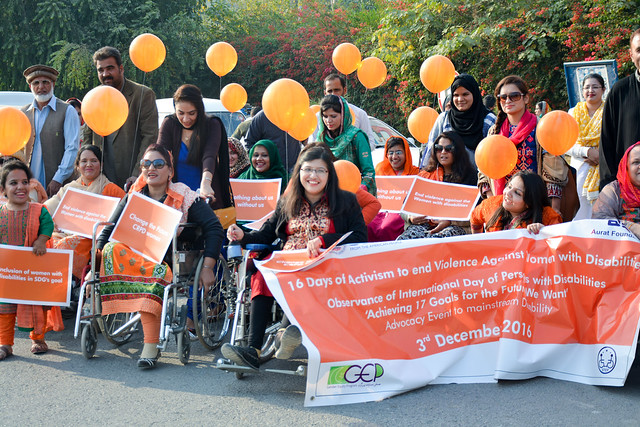