UN Women and India’s IMC Chamber of Commerce and Industry announce partnership to boost women’s entrepreneurship and empowerment; Gateway of India and other iconic Mumbai monuments turn orange as part of 16 Days of Activism

Mumbai, India — Unveiling a new partnership, UN Women and the IMC Chamber of Commerce and Industry (IMC) today organised a high-level event to underline the critical link between women’s economic empowerment and ending violence against women, and the need for urgent and adequate investment in the twin themes. UN Women Executive Director Phumzile Mlambo-Ngcuka on a visit to India was the Chief Guest at the conference titled ‘WeUNiTE: Investing in Planet 50-50’. Private sector leaders, UN officials, gender experts and activists explored how skill development, entrepreneurship and innovation could help achieve gender equality and women’s economic empowerment. Indian film actress Katrina Kaif was a special invitee at the conference, held as part of the global 16 Days of Activism against Gender Based Violence, a campaign that aims to galvanize actions on ending violence against women around the world, from 25 November, the International Day for the Elimination of Violence against Women, until 10 December, Human Rights Day. During this year’s 16 Days, the UN Women-led UNiTE campaign’s “Orange the World” initiative is highlighting the urgent need to raise money to end violence against women and girls. The India visit is the culmination of UN Women Executive Director’s tour during the 16 Days of Activism, which took her to Liberia, Malaysia and Papua New Guinea in recent weeks. Phumzile Mlambo-Ngcuka, Under-Secretary-General of the UN and Executive Director of UN Women at the conference by UN Women and IMC Chamber of Commerce and Industry. Photo: UN Women/Deepak Malik

Violence against women and girls affects one in three worldwide. A new study from ActionAid shows that in India, 73 per cent of have experienced some form of violence or harassment in the past month. Prevalent across the world in different forms, violence against women and girls also has a long term impact on economies. A recent study estimated that the cost of intimate-partner violence accounting in 2013 could be as high as 5.2 per cent of the global economy. Despite growing recognition that the pandemic of violence against women is a gross human rights violation and a serious obstacle to development, there continues to be a persistent funding gap, which impedes progress.

“Violence against women is a gross violation of rights for women and girls and a setback for society. There is also a  clear and direct link between violence against women and their ability to participate effectively and productively in the economy, including lost workdays, lower income, increased public expenditure and lost opportunities for education, employment and political participation, ” said UN Women Executive Director Phumzile Mlambo-Ngcuka at the event.  “Under investment in both gender equality and ending violence against women comes at a high human and economic cost. To prevent and end violence against women requires all key institutions in society to work together, to provide services to victims and survivors of violence,” she added. “The SDGs are an ambitious agenda, a tough one to achieve. But I do believe we are all responsible for making it possible. If I do not act now and merely speak, I will be doing a disservice to women. I will be doing whatever I can in my capacity to create awareness about gender equality,” said Katrina Kaif during the conference by UN Women and IMC Chamber of Commerce and Industry. Photo: UN Women/Deepak Malik

IMC, is an apex Chamber of Trade, Commerce and Industry with a reach of over 250,000 business establishments in India. The partnership between IMC and UN Women will accelerate efforts towards women’s economic empowerment through skill building, promoting entrepreneurship and innovation; and creating enabling environment for violence free work and public spaces.

“If our GDP has to grow, it has to be in tandem with gender equality. The WeUNiTe partnership addresses gender equality and violence against women. Today, to coincide with the partnership in the evening, heritage sites will be lit up. This is a broad partnership with UN Women which focuses on social entrepreneurship and skill building, and we look forward to working together with UN Women,” said Deepak Premnarayen, President IMC. A key highlight of the event was an ‘Equality Dialogue’ between Ms. Mlambo-Ngcuka and Ms. Chanda Kochhar, Managing Director & CEO, ICICI Bank Ltd, India’s largest private sector bank. Industry leaders, gender experts and celebrity advocates outlined various dimensions of violence against women and girls, the interventions that are showing results, and also the game changer that economic empowerment of women can be to ending the pandemic of violence.

“The SDGs are an ambitious agenda, a tough one to achieve. But I do believe we are all responsible for making it possible. If I do not act now and merely speak, I will be doing a disservice to women. I will be doing whatever I can in my capacity to create awareness about gender equality,” said Katrina Kaif.

“I got threats when I filed the case against my attacker. I got a historical judgment in my case, he was given life imprisonment. I had become blind- handicapped, I didn’t want to be a burden on my family. I became independent and empowered myself to move ahead in life. I finished my education and met NGOs working on acid attack survivors and I joined hands with them and fought for them,” said Haseena Hussain, National Federation of the Blind, Karnataka, and acid attack survivor.

Accompanying the event and sending a strong signal against gender-based violence, iconic Mumbai monuments such as the Gateway of India were illuminated in orange to mark the 16 Days of Activism to end violence against women, attended by UN Women Executive Director and other dignitaries. Chhatrapati Shivaji Terminus, the Western Railway building, and the University of Mumbai were also ‘oranged’ as part of the initiative. The Indian landmarks join a growing list of world monuments that are being “oranged” during the 16 Days fortnight, which include, in North America New York City’s Gracie Mansion and City Hall and the BC Stadium in Vancouver, Canada; the Presidential Palaces in Ecuador, Chile and Colombia; the Minar-i-Pakistan monument in Pakistan, the UNESCO World Heritage Patan Durbar Square in Nepal, and Xi Hu Lake and temples in China; the Parliament of Uganda and the Gender Ministry in Liberia; the Church of the Nativity in Bethlehem and the archaeological site of Jerash in Jordan; and the European Parliament, European Commission buildings and over 30 landmark buildings in Istanbul.

We must step up skilling efforts, make women educated, but also employable. At ICICI we have put in place measures such as adoption leave, work-from-home, using technology to ensure safety of women staff during travels. Maternity leave and focus on women’s safety are critical.”

Women have started questioning the narrative—whether it is questioning the personal laws or why should women be discriminated? We need to look at a transformative society and be partners to ensure a gender equal world.” 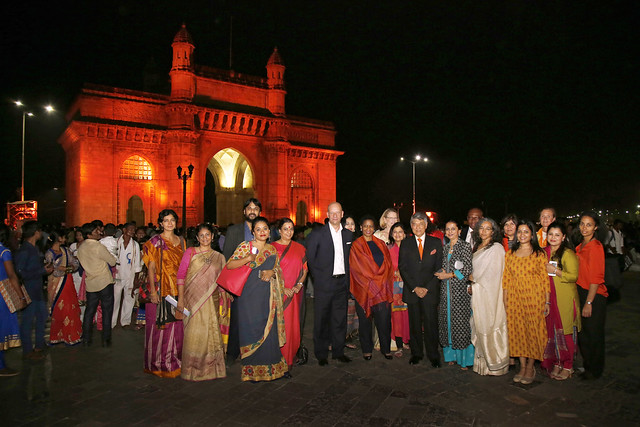