Q&A with Sisters in Danger 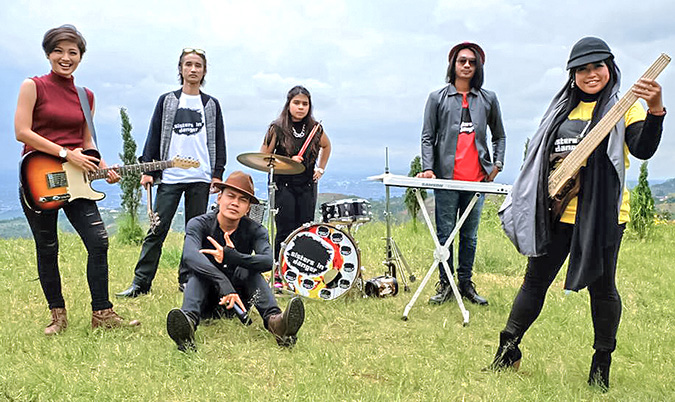 UN Women Regional Office for Asia and the Pacific launched the UNiTE Song Contest to capture the spirit of the Secretary General’s UNiTE to End Violence against Women Campaign by inviting people to submit their own music video about ending violence against women. UN Women spoke with Sisters in Danger from Indonesia about the inspiration for their song for the UNiTE Song Contest.

Please tell us about your group, the Sisters in Danger.

We are Sisters in Danger from Indonesia, a project band recruited for a campaign to stop violence against women and children. We proudly enter the UNiTE 2016-2017 Song Contest with our own song “16 Oranges” on Valentine’s Day – the day when people celebrate love. Sisters in Danger is not a band just for concerts, but the band is also providing a platform for a musical discussion on ending violence. We sing for true love and justice without violence. We hope our song brings people to unite to end violence against women.

What was your inspiration to create this song?

Why is the issue of gender-based violence important in Indonesia?

16 Oranges by Sisters in Danger #UNiTEsong

But I wanna tell you, my friends
The strongest vitamin is the true love
And justice from the mind
So we can orange the world

So let me tell you, my friends
We grow the seeds of equality
16 days, 16 centuries, and more
A brighter future: violence no more

Related News
30/09/2016
Enhancing women and girls’ safety and mobility in public spaces requires strong advocacy that sees women as agents of their own destiny
11/12/2014
Around the world, women and men of all ages “orange their hoods” to end violence
04/12/2014
Lao Youth Unites to end Violence against women!
25/11/2014
Sania Mirza announced as UN Women’s Goodwill Ambassador for South Asia
24/11/2014
Press release: A global call to “Orange YOUR Neighbourhood” galvanizes communities to stop violence against women
END_OF_DOCUMENT_TOKEN_TO_BE_REPLACED