Bangkok, Thailand — Many of the Philippine women working abroad face exploitation and abuse, but they may face even greater challenges when it’s time to go back home. After long years of separation from family and country, they are estranged from children and spouses and have problems finding new work when they return back home. And despite so many hours of toil abroad, they often don’t have enough savings to get started again. 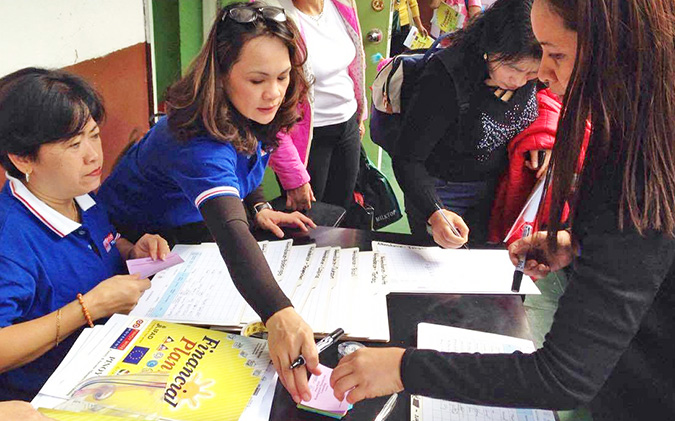 These women have found help from a project implemented by Philippines-based NGOs and supported by UN Women’s Fund for Gender Equality. The Atikha Overseas Workers and Communities Initiatives and Pinoy Wise International are providing resettlement trainings and support to female migrant domestic workers in Hong Kong and Singapore and to their families back in the Philippines. Their three-year initiative, called “Coming Home, Reintegration of Migrant Domestic Workers in the Philippines” runs from 2016 to 2019 and aims to give the women and their families the psycho-social, financial and other practical knowledge and skills they will need in preparation for reintegration.

“The trainings touched my heart because for a long time, migrant workers were left to mend for their broken marriages, broken families and spoiled children” said Cristina Cayat, 42, who has worked in Hong Kong for 21 years. “Before, the sad stories of migrant domestic workers only frustrated me. But now because of the training, I have renewed hope.”

But a study by Atikha found that 70 per cent of migrant domestic workers are not able to save for their long-term goals. The reasons: low salary, indebtedness, lack of financial literacy, and the remittances they must send to the families back home. Some have been able to save and set up businesses upon returning home, but due to their lack of entrepreneurial skills, about 70 per cent of these businesses end up failing, Atikha has found. 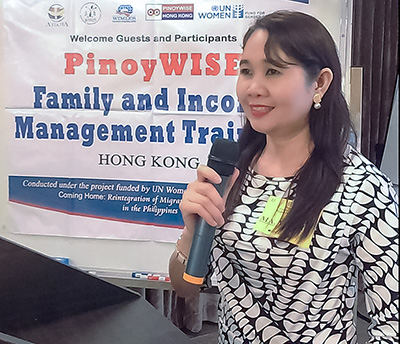 Wilma Padura does a training on Family and Income Management in Hong Kong in October 2016. Photo: Atikha/Andrea Mendoza

The project also organizes a “market place” that links the migrant domestic workers to investments and business opportunities in the Philippines and with services of government agencies in the Philippines and in Hong Kong and Singapore. As of February 2017, about 60 workers have invested in agriculture-based cooperatives back in their home regions. 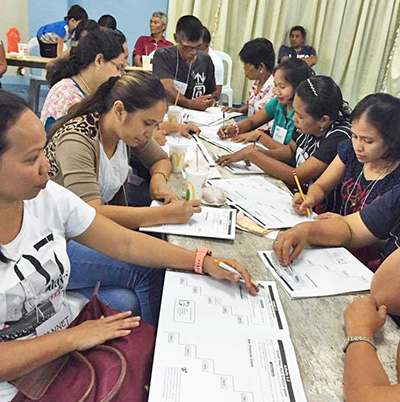 Family members of migrant domestic workers in Hong Kong and Singapore attend a Family and Income Management training at a gymnasium in Iloilo province, Philippines, in December 2016. Photo: Atikha/Mai Dizon-Anonuevo

“Family and income management training is very much needed for both the migrant and family, and we became prepared (for) when we opt to go home for good” said Lori Brunio, 52, who has been a domestic worker in Hong Kong for 23 years.

Wilma Padura, 43, a domestic worker in Hong Kong for 19 years, has invested in a development cooperative and helps counsel other workers to start saving and investing while still abroad. Before Hong Kong, Ms. Padura had been a teacher in Passi City, Iloilo province.

The Coming Home project also provides counselling to the migrant workers and their families back home on how to handle the psychological and emotional problems that come with long years of separation, including dependency, alienation and communication gaps.

The project is reaching out to the workers’ children studying in 15 schools in the Philippines. In cooperation with the Department of Education, the project next month will begin training teachers in those schools on how to help the children understand the realities of their mothers’ work abroad and how they can help their mothers return home as soon as possible.